…at least for now. 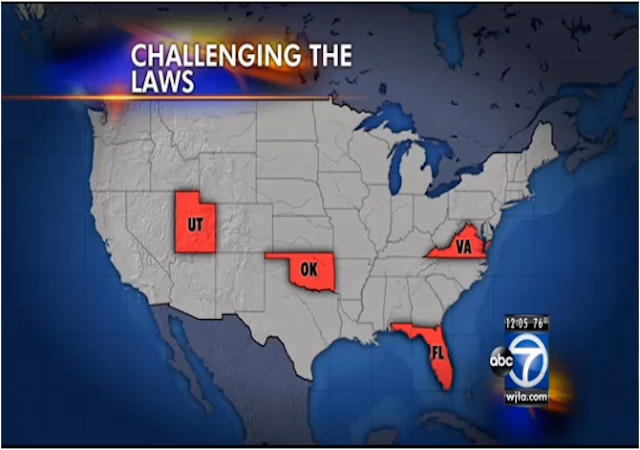 Last month, the Fourth Circuit Court of Appeals struck down as unconstitutional Virginia’s same sex marriage ban. This week, however, the Supreme Court put a hold on that ruling, meaning that for the time being gay marriages are blocked in Virginia:

While nearly all federal and state courts have ruled in favor of same-sex marriage since the high court issued two landmark decisions in June 2013, judges have blocked nearly all such marriages while the cases are appealed. The justices had stepped in once before, in Utah, to do just that.

If the court declines to hear the Virginia appeal, the stay would be lifted and couples could begin getting married. Otherwise, those marriages would have to wait until the case is ultimately decided.

“The Supreme Court is making clear, as it already did in the Utah marriage case, that it believes a dignified process is better than disorder,” said Byron Babione, senior counsel at Alliance Defending Freedom, which represents the Virginia court clerk opposed to same-sex marriage.

Virginia Attorney General Mike Herring, who has decided not to support the new ban, actually asked the Supreme Court to issue a stay on the Fourth Circuit’s ruling, citing concerns over the impact an eventual negative ruling could have on families and businesses.

“I believe the district and appeals courts ruled correctly in striking down Virginia’s discriminatory marriage ban, but it has long been clear that the Supreme Court will likely have the final word. I want that decision to come as soon as possible and I want the voices of Virginians to be heard,” Herring said in a statement.

The case out of Utah is similar to that of Virginia in that the Supreme Court issued a stay on a previous ruling overturning the state’s same sex marriage ban. Via the ABA Journal:

The order applies to so-called “interim marriages” entered into after a federal judge struck down the ban on Dec. 20 and the U.S. Supreme Court stayed the decision pending appeal on Jan. 6, report the New York Times, the Salt Lake Tribune and SCOTUSblog. The new stay (PDF) was issued in a case on the status of those marriages.

Utah plans to appeal a ruling handed down by the Tenth Circuit from earlier this summer that overturned Utah’s same sex marriage ban. In its brief, the State questioned the proposition that marriage is a fundamental right, and said that “Constitutional rights do not spring into existence by mass social activity triggered by the unreviewed decision of a single district court judge.”

The justices will meet in September to begin discussion on the various petitions for review that the Court has fielded throughout the summer recess.

I’m reading Mark Levin’s book “The Liberty Amendments.” The decline of America since FDR can substantially be laid at the feed of SCOTUS and the legal profession as a whole, in its failure to rein in its own arrogance and power grabs.

25% of the elementary children in my county are illegal aliens or children of illegal aliens. I am paying 20% higher property tax bills because of this.

If you read Plyler, it reads like an op-ed, not a legal opinion. The justices have decided their ivory tower opinions trump reality, and they’ve killed America.

If history doesn’t judge them harshly, then history is useless.

Same with this same-sex garbage: just more judges acting badly. And the legal profession either admires them or sits on its hands. Disgraceful. Illustrates why checks and balances are important – because no branch can be trusted not to flatter itself, enlarge its power, and just generally be destructive to the whole.

Couldn’t agree more. It is morally wrong that we have to pay, essentially reward, for the education of illegals. I want every one of them out of here.

Other bonehead SCOTUS decisions? Kelo vs New London, and ObamaCare.

The problem with judicial overreach in the Supreme Court go back to the second one. The first one was great, but did too little to be enough to set clear precedent. It was a combination of hubris and of pro-slavery sentiment, where by judicial bending of laws the anti-slavery intent of the Constitution was negated.

A minor set-back in the Kenyan Usurper’s goal to make homosexual marriage mandatory.

Perhaps the cognitive dissonance has taken its toll. Selective normalization creates moral hazards. If they intend to normalize homosexual behavior, then they cannot as a matter of principle oppose the normalization of other dysfunctional and unproductive behaviors. And with the normalization of elective abortion, or the “choice”, there is really no behavior or association that they can logically or “morally” oppose. Hopefully, this trend will invite a rational review of the external and mutual inconsistency of their policies and their inevitable consequences.

I for one am extremely happy that Florida now has a Federal Court decision against the ban on gay marriage (we have both a Constitutional ban and a legislative ban here).