President Obama cited as a drag on Shaheen. 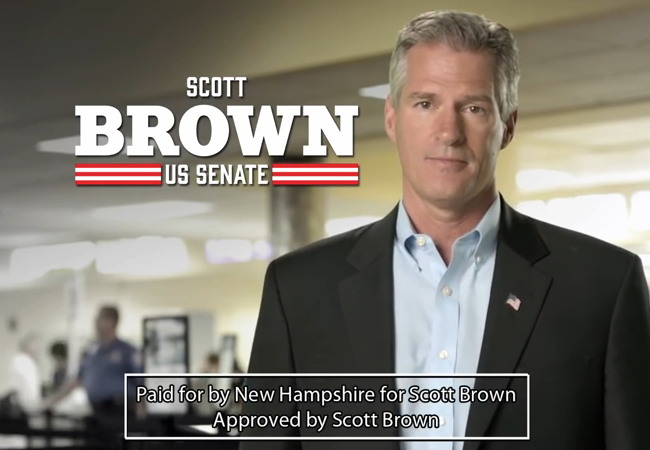 According to a new poll from WMUR in New Hampshire on the race for US senate, Republican Scott Brown has gained a tremendous amount of ground on incumbent Democrat Jeanne Shaheen.

The US Senate race in New Hampshire has narrowed, and Republican Scott Brown is now in a dead heat with incumbent Democrat Jeanne Shaheen, according to a new poll.

The Granite State Poll, released Thursday evening, found Brown trailing Shaheen, 44 percent to 46 percent among likely voters, with 9 percent not knowing or undecided in a hypothetical general election matchup. The narrow gap between the two contenders was within the margin of error of the poll, which was sponsored by WMUR-TV and conducted by the University of New Hampshire Survey Center.

Pollster Andrew E. Smith, a political science professor at UNH, said he thought the shift was a result of national trends and had little to do with the candidates’ campaigns.

“I think it’s an Obama drag,” he said. The new WMUR poll found only 38 percent of New Hampshire adults approve of the way President Obama was handling his job, a 7 percentage point drop from about a month earlier, while 55 percent disapprove.

Guy Benson of Hot Air notes that other recent polls weren’t as kind to Brown, so it’s difficult to tell if this is a trend:

The Brown/Shaheen head-to-head hasn’t been even remotely this close since, well, we wrote about this Dartmouth survey back in early May. Since then, the race has appeared to be slowly slipping away, with the incumbent leading by roughly 10 points in most polls.  We’ll see if the new WMUR poll — which is very respected in the state — is a blip, or the first data point in a trend.

Benson also notes that Brown is running ads in New Hampshire on a very specific subject.

Scott Brown is tying Jeanne Shaheen to Obama on illegal immigration and amnesty.

Apparently, the people of the Granite State are responding.

Don’t we all want some pudding? I prefer butterscotch myself.

What’s most interesting to me is that Brown’s gain is attributed to immigration.

Shaheen wouldn’t have Obama dragging her down if she hadn’t been his boot-licking, butt-kissing sycophant for 5 1/2 years. She never votes against him or Reid.

You might as well train a monkey and send her to the Senate, at least the simian would work for bananas.