Rick Perry isn’t afraid of “this farce of a prosecution”

Rick Perry isn’t afraid of “this farce of a prosecution”

…and neither are his fundraisers! 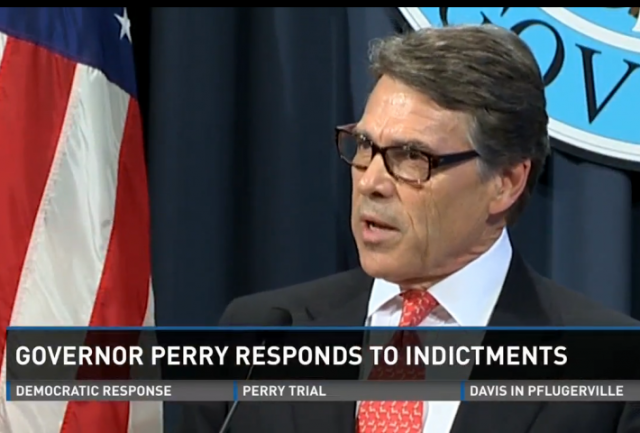 Formed this year at the end of July, “Rick PAC,” Rick Perry’s Political Action Committee, is still going strong with their fundraising efforts ahead of the 2014 elections and 2016 presidential election cycle.

I received this in my inbox this morning, and am taking it as proof positive that Rick Perry is beyond confident that he will not only beat Texas democrats’ efforts to prosecute him for rightfully using his veto power, but that his reputation will remain untarnished when the dust settles. 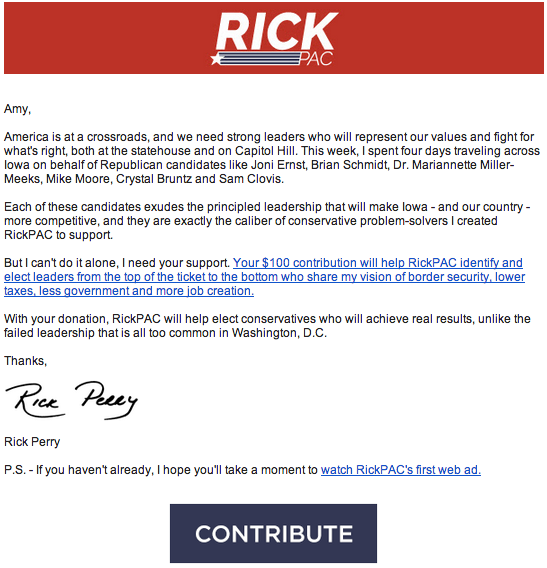 Officially registered as a Political Action Committee, Rick PAC can legally raise money to both support or oppose multiple federal candidates; this means that if he chooses to stay in the running for 2016, Perry will be able to use the money raised from his recent groundswell of support to make another run for the Presidency.

“This indictment amounts to nothing more than an abuse of power and I cannot, and will not, allow that to happen. I intend to fight against those who would erode our state’s constitution and laws purely for political purposes, and I intend to win. I will explore every legal avenue to expedite this matter and bring it to a swift conclusion. I am confident we will ultimately prevail, that this farce of a prosecution will be revealed for what it is, and that those responsible will be held to account,” said Gov. Perry.

Governor Perry is currently touring key electoral states, and is slated to appear in South Carolina at the end of the month.

It’s been tried but DoJ isn’t interested in doing that! Of course, that might have to wait until 2017!

I don’t know the laws of Texas (that’s a Rags question). But the Texas Attorney General might want to use his discretion to indict some of the Democrats involved in the Perry mess, including members of Texans for Public Justice.

The Absolute Immunity conferred on prosecutors concerns civil not criminal liability. Even that immunity is being chipped away.

Not my bailiwick, happily.

But I think there is a civil rights cause under state law here. Maybe something along the lines of abuse of office, too.

And, of course, these idiots are going to have to face the peeples…and their own masters.

I can’t imagine any of the Deemocrat shot-callers think this was a very shiny idea just now.

The Texas Courts have to laugh this one away. Otherwise the Courts open up a real can of Texas whoop-ass. Jonathan Turley makes a convincing case that the Statute used to indict Perry can be used for all sorts of mischief if the indictment stands. On his blog Turley wrote:

If this novel interpretation of the Statute stands, then the Prosecutor and Texans for Public Justice are vulnerable under the same Statute. After all they were trying to coerce Rick Perry not to urge the DA to step down.

If this were civil, I’d file a motion for summary judgment.

There is no such corollary in Texas criminal law (as I recall).

Chuck Skinner would know what procedures might apply, but I don’t think there’s even a quick route to a dismissal in a bogus criminal complaint.

I don’t know Texas Criminal procedure. I’ve learned from you, that you Texans have some of your own traditions.

I vaguely recall that the indictment of President Bush by someone in Southern Texas was quickly quashed. Quick dismissal may come down to power politics.

This indictment is a blight on what should be a noble profession.

Why would Perry be afraid. This could be the best thing that happened to him.

What is with republicans and judges.

Bush Sr and Cornyn appointed the the prosecutor McCrum

What kind of republican’s are there in Texas?

Now you know why John Boehner is do docile: the corrupt backstabbing coward has probably been extorted for the past 4 years.

If memory serves me right, the President of the United States has made numerous threats to veto bills as have numerous governors in their states currently and historically. If it is not legitimate to threaten to use the veto power (which serves the legislature by letting them know prospects of a bill becoming a law), much damage would be done to the legislative process. This whole prosecution is legally absurd, it is a political question, not a criminal one.

For just one example of Obama threatening a veto see http://thehill.com/regulation/administration/200577-obama-threatens-vetoes-of-bills-limiting-power. Guess it is time for a presidential indictment, he can be processed in the same way as Perry, no arrest warrant needed. Not much difference in the crime, Obama wanted to accomplish a political end and so threatened a veto. This could lead to indicting all 49 other governors too.