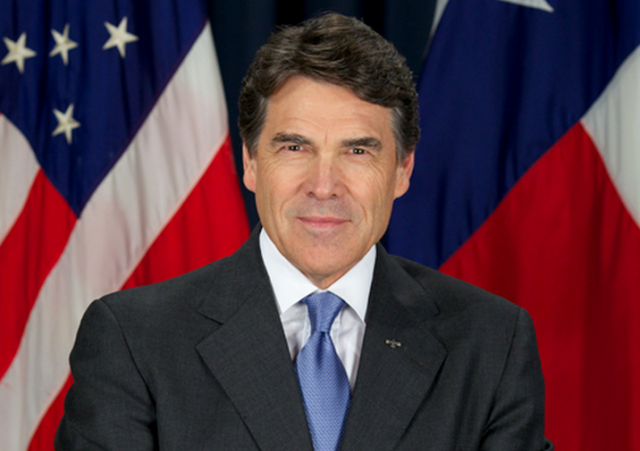 A grand jury has handed up an indictment against Gov. Rick Perry in connection with the investigation into an effort to force Travis County District Attorney Rosemary Lehmberg to resign.

At the center of the issue is a complaint about intimidation stemming from Perry’s threat to veto of $7.5 million in state funding to the Public Integrity Unit run by Lehmberg’s office. The threat came after she pleaded guilty to drunk driving and served a 45-day sentence; Perry called on her to step down but she refused to resign her position. Perry then vetoed the funding for the PIU.

A grand jury was called to determine whether or not Perry broke the law when he threatened to veto the funding. As a result they issued indictments on two felony charges: abuse of official capacity and coercion of public servant. If found guilty on the charges, Perry could be sentenced to a maximum 109 years in prison.

An indictment indicates the grand jury believes the state has a strong enough case to send to trial and is not a finding of guilt. Special prosecutor Michael McCrum oversaw the presentation to the grand jury who has been meeting on and off this summer and returned the indictment Friday afternoon.

“The first count of abuse of official capacity. It basically charges that on the day of the veto in 2013 that Governor Perry intentionally or knowingly misused government property that had come into his custody or control,” McCrum said Friday afternoon.

More details and analysis to follow from Amy (in Texas).

“The veto in question was made in accordance with the veto authority afforded to every governor under the Texas Constitution.,” Perry’s general counsel, Mary Anne Wiley, said in a statement responding to the indictment. “We will continue to aggressively defend the governor’s lawful and constitutional action, and believe we will ultimately prevail.”

Here is the footage of Rosemary Lehmberg’s booking. According to court records, a blood test taken the night of the arrest showed that Lehmberg’s BAC was .239–almost three times the legal limit for driving.

The question remains whether or not Perry the Potential Presidential Candidate will be able to use this video as a way to protect his reputation with voters.

You can read a copy of the indictment here via Slate:

Gee. . .
I think it’s time for state reps to choke the dollars out of ALL of Travis county. Abuse of power? It starts right friggin’ there in the Travis County DA’s office.

Let’s see now, according to the AP report via http://www.drudgereport.com/

No one disputes that Perry is allowed to veto measures approved by the Legislature, including part or all of the state budget. But the left-leaning Texans for Public Justice government watchdog group filed an ethics complaint accusing the governor of coercion because he threatened to use his veto before actually doing so in an attempt to pressure Lehmberg to quit.

More FAKE Drama from that group –
“The Dems and the Drama Queens!” (Lead singer is Obama!)

So – he veto’d a part of a budget, which, as I understand it, he’s allowed to do.

And a DA he’s accusing of being unethical, then goes and ABUSES power to indict him.

Can he pardon himself?

In Texas? No. Governors in Texas do not have pardon power, rather the state Board of Pardon’s and Parole’s does. While he appoints members of the board, they are independent actors.

“The Governor has authority to grant clemency upon written recommendation of a majority of the Board of Pardons and Paroles.”

Notice the part about “written recommendation.” Without that he cannot pardon anyone.

Also notice he cannot stop executions, only delay them one time for 30 days.

If found guilty on the charges, Perry could be sentenced to a maximum 109 years in prison.

Wow!
Then how many years is team Obama/Lerner/Holder going to get?

I guess Taxans are sensitive to executive powered abuse. Good for them.

Well, SOMEBODY at Deemocrat Central must have been messing their union suit (HEH!) at the prospects of a Perry candidacy for 2016, ’cause this is dirty tricks a la Clinton.

True, but this one might backfire on them when the facts of the case come out. Oh wait, that would require an honest press doing their job. Crap.

So what they’re saying is that a governor isn’t permitted to threaten to use authority he lawfully possesses to combat public corruption, and that doing so is in and of itself public corruption.

*these rules only apply when the governor has an (R) after his name.
All rules are subject to change as Democrats see fit.

At least at first glance, it appears that a Texas governor does not have pardon power, much less the power to pardon himself.

She didn’t just “plead guilty to drunk driving.” She made a complete fool of herself in the process. She was combative, to put it mildly. She threatened the officers and jailers throughout the entire process… then she refused to resign from her position as DA and head of the PUBLIC INTEGRITY UNIT.

She is on video trying to intimidate the officers and requesting that people make calls on her behalf to get a judge to get her off.

But the progs are going after Perry for using his authority to room elected officials who lack integrity out of THE PUBLIC INTEGRITY OFFICE?

Texas is one of the few States in which the Governor cannot issue pardons. It must go through the Board of Pardons and Parole, which Perry controls.

I suggest he get himself pardoned forthwith. If he does not, the process alone will consume him. The result will not matter.

For good measure the State Attorney General should look into the local prosecutor.

A State has a fatal flaw when it allows a local prosecutor to bully the Governor of a State.

Perry indicted for doing his job.
Well, for that, he get’s an “Atta-Boy”…
The highest honor I can bestow.
Keep up the good work, Gov. Perry.

I guess Perry should imitate MA gov Deval Patrick who has a similar problem with a state administrator, but doesn’t try to rectify the problem. From the inimitable Howie Carr:

Sheila Burgess, the hack head of the Mass. Highway Safety Division, with 32 entries on her driving record since 1982, including seven traffic accidents and four speeding violations.

I’m a Texas republican who is not a big fan of Rick Perry, but I support him completely here — as do most Texans, who recognized that pouring $7.5 million state dollars into the coffers of a dangerous drugged and drunk driving DA who has no accountability to statewide voters was the proper thing to do.http://rhymeswithright.mu.nu/archives/351199.php

He doesn’t look like a ham sandwich to me….

I expect the national media to focus on this as vigorously as they ignored the IRS scandals.

The snooze media will ignore the politics and nitpick the law until everyone is bored to death, cause being good Dems they have no problem with drunk DAs but plenty with GOP governors.

I could not look at that vid. I already have a tummy ache & don’t wanna puke.

Can someone explain the Tom Delay case? I keep reading that the crime he was charged with was not a crime at the time he “committed” it, for example.
How the heck did he wind up convicted?
Thinking back, was Sarah Palin hounded out of office with frivolous charges as well? I didn’t follow that one closely.

Something to understand about the Travis County legal system. It is a wholly owned subsidiary of the Democratic party in most matters. Ronny Earle who got the Tom deLay case through used every trick in the book to find charges against Republican statewide office holders. Judges routinely creatively interpret the law (we elect our judges) in Travis County. Juries there are by nature left of center. Republican politicians are guilty until proven convicted (see what I did there?).

Tom deLay got off because once it got to an appellate level (I cannot remember whether State or Federal) they found enough reversable error to power a perpetual motion machine. The biggest one being he was indicted for actions under a law that hadn’t been written at the time he was accused of breaking it. Thankfully we still don’t have a “futurecrime” category of law. Yet.

Austin wants to be San Francisco. City Council elections are a race to the left pander fest. It’s a pit, which is why I moved to another county, but I still follow the politics there.

Also, for some bizarre reason, Delay agreed to let the prosecutor “look back” at the period in question even though he could have just given him the middle finger. It was a tactical error. Delay had no clue, but should have, that the prosecutor would have no trouble getting an indictment based solely on smoke and mirrors. That Delay was innocent and eventually vindicated was of no matter. It ruined his career, which is exactly what the prosecutor’s objective was. So, Delay EVENTUALLY won the court case, but the ‘rats won the war. They took out a very powerful man who underestimated their penchant for evil and corruption. Checkmate. Stupid, trusting ‘pub rolls the dice and loses again.

Could not the Texas legislature redefine the criminal statutes in question, and in so doing make explicit exceptions for the “crimes” described in the Perry indictment, and do so retroactively?

These charges are contrived. They are a bastardization of a law that gives Perry the authority to do what he did.

It would be a tactical error, politically, to do what you’re suggesting and a legal absurdity.

So it would not be a tactical error to allow these charges to hang unjustly over the Governor’s head for years? And how so is amending the statutes in question a “legal absurdity”?

I expect a defense motion to quash the indictment as a misapplication of the law. Barring that, a conviction (if they can get one) will be overturned on appeal. Perry was attempting to enforce a policy of accountable governance as the State’s chief executive officer, not some hornswoggler attempting to coerce a state employee for his personal aggrandizement. But with progressive, it’s always personal, because they can’t imagine anyone doing anything on principle.

My guess at what’s going on behind the scenes is that internal ‘rat polling shows Perry very strong for ’16, mainly because of his comparatively strong actions against the obamullah-made “border crisis”.

There might even be a Hillary in the woodpile taking advantage of the animus of the drunken DA for Perry. Thinking back to the Clinton’s time in the Arkansas state house and the White House, this is EXACTLY her kind of maneuvering.

You could see a case if the governor was using the veto to do something like coerce someone into giving him property or perhap buying something with it. I can’t see it in terms of using his huge tray authority to defund an unethical prosecutor who threatened to use her power to get at people for arresting her for driving inebriated.

IMO Perry’s real crime is sending the National Guard to the border and this is his payback.

So I guess the libs will shut up making fun of the Republican lawsuit against the POTUS? And now is it open season on POTUS for the same crimes for all the times he has threatened a veto?

Obama has frequently threatened to veto legislation. Do we get to indict him for that threat?

I wonder what happened to the officer who arrested her for the DWI.

Such as, is he still a police officer?

my thoughts and some other videos
http://www.theconservativevoices.com/news/cat/political/perry-targeted-by-da-office