Yearning to be free in the face of communist oppression, a history not taught in our schools. 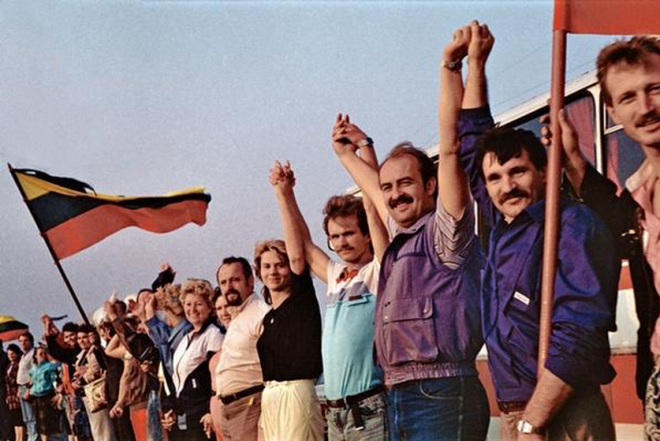 I need to calendar this so I remember each year. This year, I would have forgotten the date if I had not seen Marathon Pundit’s post On this day in 1989: Two million hold hands in peaceful anti-Soviet Baltic Way.

We wrote about the Baltic Way last year:

On this day in 1989, the Baltic Way took place. People in the Baltic Republics of the Soviet Union (Estonia, Latvia, Lithuania) formed a human chain stretching for hundreds of miles:

… on 23 August 1989, the three nations living by the Baltic Sea surprised the world by taking hold of each other’s hands and jointly demanding recognition of the secret clauses in the Molotov-Ribbentrop pact and the re-establishment of the independence of the Baltic States. More than a million people joined hands to create a 600 km long human chain from the foot of Toompea in Tallinn to the foot of the Gediminas Tower in Vilnius, crossing Riga and the River Daugava on its way, creating a synergy in the drive for freedom that united the three countries.

Now you know why the Baltic states, looking at Russian domination of eastern Ukraine and annexation of the Crimea, are worried.

Last year the hat tip went to Gabriella Hoffman, the daughter of Lituanian immirgants and a tireless conservative activist, who again this year is tweeting out remembrance of the event:

Some good things to remember. Always.

There is only one instant solution: keep your kids out of public schools, or out of liberal private schools.

Potentially amazing optics: human chain on the US border with Mexico!

Plus, all you’d really need to do is rotate the human chain already there 90 degrees…

There is a lot of similarities, both good and bad, but the Baltic peoples are basically Western peoples, historically Catholic and Protestant, but on the edge of Russian lebensraum.
Ukrainians are historically Orthodox (Except for Galicia) and very similar to Russians in mentality and language (actually most speak Russian). Plus, Ukraine has natural resources to steal. It’s Russia and Ukraine that developed the thuggish oligarch culture after the break down of Soviet Union.

When I was a teenager our dentist was Latvian and he was a frequent customer at one of my family’s stores.

He organized soccer leagues and events for the children of the local Baltic Republics’ expats.

He told my father that as a young boy during WWII he remembered stepping over the bodies of dead German soldiers as his family fled.

He was always talking about the Soviet Union and the liberation of the countries it annexed. Whenever he came into our store it was to have something printed up about the situation.

Luckily, he lived to see his country’s liberation, but he died suddenly of a heart attack not long afterwards.

If he were alive today, he’d be sounding the alarm of Russia’s actions.

If they fled it had to have been through German territory . Hence they were considered nazis .& no net wanted the either. There would have been more if they had not bee bombed by the allies.

Not so certain it was not deliberate .

No -one wanted them either .

BTW the 220 Russian trucks went Into Luhansk & back again without a problem . They waited a week & just said – enough & went in . Ukraine did not dare fire on them.

Sad thing that the Red Cross also stalled the effort & were prepared to deny the citizens food & emergency aid. OSCE monitors did ok though.

Did you know that Ukraine is now exporting coal from Australia and New Zealand? But wait, you actually have to pay them!

Australia exports about 8% of its coal to Europe & this might be getting diverted from Western Europe .

I live near a coal export port. .My grandfather lived in Abergavenny ( it of the slag disaster in the 60s) so I have a keen interest in coal . I would love to know what is going on because winter is weeks away . There are enough rogue coal mines to supply Luhansk & theDonetsk & apparently citizens are digging in .

Ukrainian recruits out there in the trenches are going to freeze.

I think they are already feeling cold at night, sleeping on the ground without blankets.
Kiev turned off utilities in Donbas cities, by the way, but if things get tough there, Putin, no doubt, will step in.
Ukrainians everywhere are preparing for no heat in winter. Morale is low and falling and government is going around begging for money, which, of course, they won’t get, at least not enough. Merely is there proposing to federalize them, I hear. Back to square 1.

Yes. The 220 trucks to Luhansk was a trial run . Got to say he handled that perfectly . Looked like Putin was boxed in & all show but he waited , did the right things & then – just opened the gates & rolled in. ( & out) .

If I were he next time I would bring 1000 refugees back in every convoy & dare Kiev/ NATO to bomb them.

I’m sure Putin could annex Donetsk and Lugansk tomorrow if he wanted to, but he’s probably waiting for the rest of the South-East is softened up.