America is finally waking up. 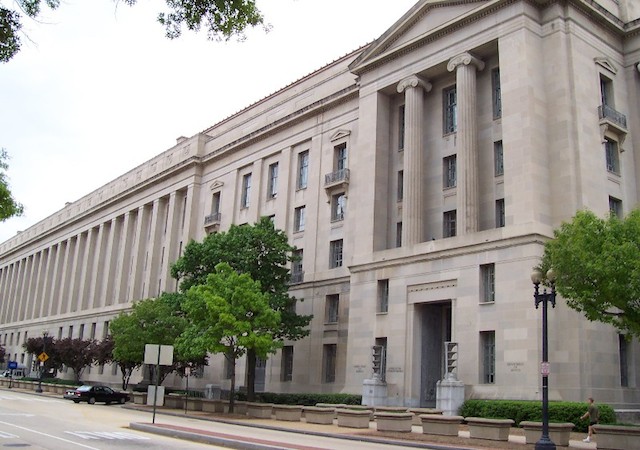 Surprising absolutely no one, a new Rasmussen report released today reveals that the majority of Americans believe that the Department of Justice is motivated by a political agenda, as opposed to upholding justice:

A new Rasmussen Reports national telephone survey finds that 38% of Likely U.S. Voters have at least a somewhat favorable opinion of the Justice Department, while 53% view it unfavorably. This includes only nine percent (9%) with a Very Favorable view and 26% with a Very Unfavorable one. (To see survey question wording, click here.)

Just 35% think the Justice Department is more concerned with making sure justice is done when it decides to investigate a local crime independent of local police. But 54% think instead that the Justice Department is more concerned with politics when it makes those decisions. Eleven percent (11%) are undecided.
…
This distrust of the feds carries over into views of a planned new federal database to track “misinformation” and hate speech on the social media site Twitter. Thirty-five percent (35%) believe the federal government will use the database to go after real criminals, but 53% believe it will be used to monitor law-abiding citizens instead. Twelve percent (12%) are not sure.

Attorney General Eric Holder’s recent intervention in Ferguson, Missouri has shone a light on problems with the way the DoJ approaches its duty. Problems within the DoJ—especially those involving racial issues— are nothing new, but the increased news coverage on the scandals surrounding the DoJ appears to be doing its job.

For example, the Rasmussen poll reflects the general sentiment exhibited by conservative pundits commenting on the suggestion that Obama appoint a “Police Czar”. Only 20% of voters approve of federal control over local police departments, and the lack of evidence that a federal civil rights crime occurred on the night Michael Brown died has people like Andrew McCarthy on the alert:

Based on what is known about the unblemished six-year record of Officer Darren Wilson and the facts surrounding his shooting of 18-year-old Michael Brown, there is no reason to suspect racism, much less that any thought was given to Mr. Brown’s federal rights during the sudden, violent exchange. There is no way this is a civil-rights case . . . unless you are a backward-thinking dolt who spots racism based on nothing more than the fact that the police officer is white and the victim is black.

It is a violation of federal law to subject a person to criminal investigation solely on the basis of his race. To prevent such government abuse, to root out institutional racism, is the objective of the civil-rights laws, which hold that a person may not be deprived of his rights and privileges — including due process and equal protection under the law — based on his race.

Furthermore, stories highlighting Holder’s lack of accountability regarding IRS targeting of conservative groups, and his refusal to take the lead in the Benghazi investigation, have conservatives on edge and (if Rasmussen’s polling numbers are accurate) Americans in general asking questions.

Interestingly enough, a similar poll released by Gallup soon after the death of Michael Brown showed that only 27% of national adults have “a great deal” of confidence in the criminal justice system; blacks, however, “have significantly lower levels of confidence in the police as an institution, and lower assessments of the honesty and ethics of police officers specifically.”

The relative stability of these measures suggests that the current news focused on allegations of misuse of government power has not had an immediate impact on the public’s views of the federal government, at least as measured by these two questions. At the same time, an update on Americans’ views of the IRS shows significantly more negative attitudes now than in 2009, underscoring the idea that the current scandals’ impact may be more localized to specific agencies rather than generalized to the entire federal government.

In 2014 we’re seeing a population that generally feels that the government holds too much power, and doesn’t necessarily trust the local police—and they still don’t want Holder’s DoJ to interfere. This is big.

The concepts of “Big Government” and “federal overreach” tend to strike an oblique note with those who don’t normally involve themselves in local or national politics, so the fact that this latest poll reflects severe mistrust in a federal agency that is literally defined by a purported commitment to justice is not insignificant. The scandals surrounding General Holder and the Obama Administration are increasingly striking a more personal note with the American people: they want control over their bodies, their lives, and their communities, and they’re finally starting to push back against the destructive agenda that has defined policy in America for nearly six years.

I’m afraid we have created a whole segment of the population that has not been educated to the pit falls of having the government control our lives and have become so lazy that we are doomed!

Maybe I’m just having bad day but can it really take six years to realize what is happening here in the USA.

We are it, no other country in the world can do what we can do and we have decided to diminish ourselves to the point of being inconsequential in the world.

Its a very sad day!

It’s only natural for ordinary citizens to distrust the U.S. Justice Department when the Attorney General himself talks about certain classes as “my people.”

Eric Holder is interested in nothing but “payback” and not equal treatment of all citizens under the law regardless of race, creed, color or national origin.

There’s also this very apparent drive to foster one religion over all others by this crew.

And, yes, there is something quite wrong with that.

Holder apparently thinks he has the power to distribute vast sums of money extorted from the BIG BANKS…and that IS what they did, extort, although it might have been sort of “friendly extortion”.

And who is he distributing that money to? It ain’t the Treasury.

I disagree. “Politics” implies an ebb and flow of power in accordance with the will of the people. That is the farthest thing from the minds of him and “his people” of whatever color. They are dedicated to the seizure of power, the destruction of the Constitution, and grinding the heel of their boot in the faces of the American people . . . . forever.

The goal is “Community Organizing”. Please understand what that wonderfully positive term means, for a simple introspection into it will easily come to show that it means exactly opposite of what it at first glance seems to mean.

First consider the term “community”. Well, are there communities? Yes there are. Are they new? Some are new, most are not. It fact it is found upon a simple yet broad consideration of the various communities each of us will know from life, those communities in our towns, neighborhoods, states, nation and world — that nearly EVERY ONE is actually old, and many very old: Our nation, the US, is at least 238 years old. Our religions, our sects are of varying antiquity: hundreds and even thousands of years old. Our towns range from 200+ years to a few dozen years of age, our counties are many scores of years old.

And these communities are found on the most part to have been already well established, already very well organized.

Thus what can it mean to be a “community organizer”? In any of these old communities, that is in most communities. it can only mean one thing. To be a wrecker. a destroyer of established communities. For until that wrecking is complete, there are no (or very few) communities to organize.

The Role of the Holder/Jared/Obama/Alinsky DOJ is to foment envy, hatred, jealously, strife, bitterness, divisiveness — to make grudges grow and in that growth to encourage disruption and actions deriving from destructive motives such as spite, baseless hatred, fear, envy etc. etc. This is like vats of muriatic acid poured over the concrete of a modern city: it dissolves the very structure of a community and enfogs all in poisonous green gas.