“American combat troops will not be returning to fight in Iraq.” 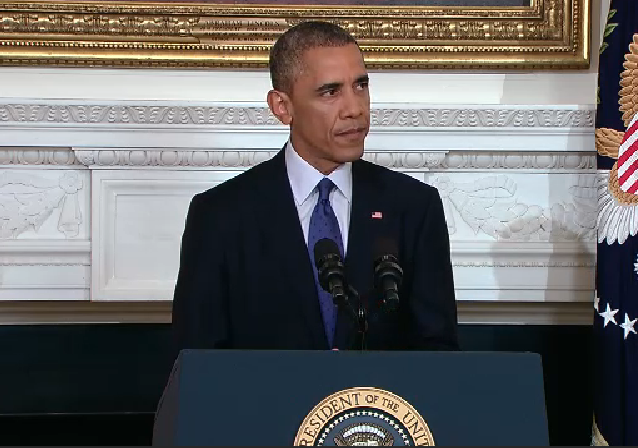 Late Thursday night, President Obama gave a press conference on the devolving situation in Iraq. Although the President does not plan on putting combat troops on the ground, he presented a plan “to prevent a potential act of genocide” against the Yazidi.

Isis forces in Iraq are currently calling for the systematic destruction of the Yazidi, an ethnic and religious minority native to Iraq. Currently, around 40,000 Yazidi are pinned atop Mount Sinjar, surrounded by Isis jihadists. President Obama has authorized targeted airstrikes if necessary to help forces break the siege on the mountain, and prevent the advance of Islamic militants toward American installations in the cities of Erbil and Baghdad.

“The US cannot and should not intervene every time there is a crisis in the world,” said President Obama Thursday night. “When we face a situation like we do on that mountain, with innocent people facing the prospect of violence on a horrific scale, and when we have a mandate to help, and when we have the unique capabilities to help avert a massacre, then i believe that the US cannot turn a blind eye. We can act, carefully and responsibility, to prevent a potential act of genocide.”

Meanwhile, diplomacy is hard at work in Gaza:

Words vs guns. I wonder which will win.

Staring down the next Armenian massacre, and everyone still wants to focus on how dirty rotten Hamas is?

Thinking the Israelis got it covered. Pretty sure everyone knows about Palywood, and how the U.N., Europe, US, have become openly anti-semitic.

“You” (lame current commie leaders) can AT LEAST stop giving millions or billions of TAXPAYER money YOU didn’t EARN – to terrorists like Hamas or others.

Next potus will have a lot to clean up.

Israel has it covered-

Nobody has Northern Iraq covered.

Wow. I actually agree with him. Following his premature evacuation, it would be poorly considered to return in force. Iraq will now stand or fall on its people’s will to preserve their liberty and way of life. America should only be involved when there is sufficient and clear cause to merit intervention.

Not trying to pick a fight, but what you just said was nonsensical, and how you said it was embarrassing.

So what’s Obama going to do now – announce another “red line”?

I will do such things —
What they are yet, I know not: but they shall be
The terrors of the earth.

If only he could actually speak without the teleprompter, Obama could be the next King Lear.

Does nothing in the world exist beyond Hamas on this blog??

You’re right Browndog, it appears that only Hamas is mentioned in your comments. Can you think of something else? (say the “War on Women” or how racist we are)

Dude? Here’s a list of article headlines currently on LI’s page one. 11 of 14 have nothing to do with Hamas. This ain’t like you. What’d the prob – trying to kick heroin or something?

About Second-Guessing Israel on Hamas

What I want to know is where the hell is NASA in all this? Per Obama, it’s their dedicated mission to make Muslims feel better about themselves so they won’t get all stabby and stuff.

First they fund them , then they bomb them- I can’t keep up .

If the POTUS hadn’t decided he was a military genius who didn’t need to listen to the advice of his military leaders we’d still have boots on the ground in Iraq and the odds are ISIS wouldn’t be a problem. Our leaving too soon left a power vacuum that allowed the Islamic Supremacists to move in. Another country that Obama “fundamentally transformed”.

“Crap! You have to let me know these things, people … I’m the boss, I need the info … Okay, fire up the bombers, General, it’s go time.”

Well, of course we will protect them. They are muslims!
Silly.

Obama framed his statement with brag of how he got us out of Iraq. Of course Bush had that scheduled, and only needed Obama to get the SOFA arranged. Obama failed miserably at that, because he has always been a trouble maker, never a real executive.

Obama is an Alynskyite subversive, unfit for service as commander in chief of the world’s only superpower. His lead from behind “strategy” seems more like cover for his affinity to the Muslim Brotherhood, over US interests. So if I have this right, the MB aligns with the Sunni, and Obama couldn’t deal with Shiite Maliki.

So rather than being “innovative”, Obama stormed out (of Iraq), leaving ISIL a path to come take our equipment. But with Iraq broken, he still refused to arm the Kurds, our closest ally in the region, other than Israel.

Now that Obama is getting bad headlines (and he can’t stop the pictures, like he does in the Mexican border refugee crisis), he is taking minimalist U.S. action, and hoping for UN support.

Our military men feel even now, we could use airstrikes and “liberal” rules of engagement to destroy much of the hardware ISIL has acquired from us, in a brief 24/7 “campaign”. But I guess Obama will have to see how that polls, and consult with his radical base, and with the Muslim Brotherhood, before taking that sort of action.

Obama put his red line at Irbil, apparently willing to surrender Mosul and that dam, surrender the largest Christian city where forced conversions are occurring, and maybe surrender Baghdad.

Or maybe Iran/Russia will help Baghdad. If we are on the path to the “three state solution”, where only the Kurds would seem to align with US. Obama wanted his MB Sunni to have a stronger role, but it seems they may be falling in with ISIL.

Last night I heard something about Maliki being removed, but nothing like that this morning. I guess we need Baghdad Bob on the scene to report.

Old diplomatic rule of thumb:
“Whatever you cannot gain on the battlefield, you cannot hope to gain at the negotiating table”
Liberal’s narcissism leads them to convince themselves they can hornswoggle anything they want or need out of anyone they meet simply by dialogue, their superior intellect taking the day, our Narcissist C In C a prime example, a close second is our current Secretary Of State “American soldiers in Vietnam behaving like the armies of Genghis Khan” indeed.

Give the Kurds a couple of squadrons of A-10 Warthogs, then step back and watch the status quo reverse itself.

So he’s going to “take action” now. Wow. I can hardly wait to see the twitter tag he unleashes on these barbarians.
/sarc

With Obama, “take action” is synonymous with “practice swings”.

Obama’s failure rate is simply staggering. They’ll never find a way forward when all of their energy is consumed cleaning up the perpetual trail of messes they’ve left behind.

Maybe as the totality of Obama’s foreign policy failures (and domestic blunders) combines with Dems losing big in the midterms becomes too taxing for Obama’s fragile grip on reality… he’ll pick up his clubs and go home early.

If only we could be that lucky.

The next US president would have to be a complete and total moron not to look like the best we ever had after Obama’s two terms.

“American combat troops will not be returning to fight in Iraq.”

What troops? They’re in the ‘Stan, in cemeteries, kicked out, or being trained to fire on Americans.

In his speech last night, he referred to “ISIL” at least a dozen times, and not “ISIS”. I haven’t seen any reference to this in the media today!

They do this because the Middle East isn’t confusing enough as it is.