Puts in issue why U.S. didn’t reach Status of Forces Agreement years ago, but why didn’t U.S. at least offer help months ago before ISIS gained control of much of country? 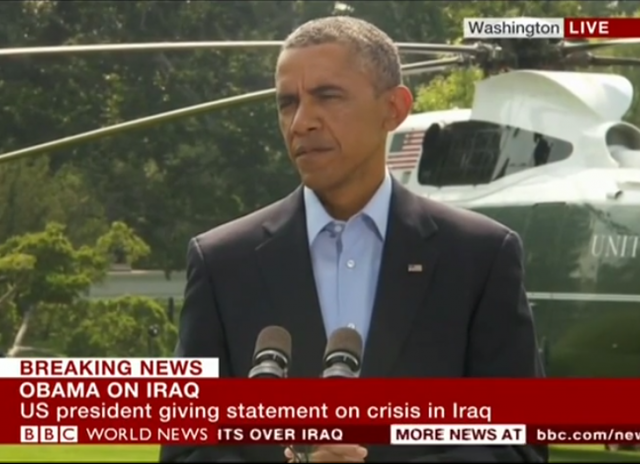 President Obama gave a press conference this morning on Iraq before heading out for vacation:

A particularly controversial portion was the assertion (starting at 7:50 of video) that it wasn’t his decision to pull U.S. troops out of Iraq.

Obama says puzzled by second-guessing of pulling out Iraq troops: "As if this was my decision"

The President is being pilloried by conservative experts and pundits after his remarks this morning.

It's hard to know which is worse: That Obama believes the nonsense he's peddling on #Iraq. Or that he doesn't – and says it anyway.

Obama: I really wanted to keep troops in Iraq in 2012 but my speech writers wouldn't let me.

The progressives at VOX aren’t buying it either.

This new Obama line “I never wanted to leave Iraq, Maliki made me” strikes me as maybe not 1000% accurate.

The lack of American troops in Iraq is widely believed by military and political to have set the power vacuum that the Islamic State of Iraq and Syria has filled with their terror campaign. Obama blames the Iraqi government for not wanting a Status of Forces Agreement — but most experts have debunked that excuse.

As National Review’s Andrew McCarthy rightly points out, Obama isn’t solely to blame for the lack of a SOFA…

Look, I will stipulate that the president’s signature recklessness is abundantly evident in Iraq. He heedlessly withdrew U.S. forces, making no effort to preserve the security gains they achieved in routing al-Qaeda, even as it became obvious that the withdrawal had evaporated those gains and invited the terror network to return with a vengeance.

Still, it was not Obama who agreed to the withdrawal schedule. It was President Bush. And it was not Obama who turned Iraq into an Islamic-supremacist state seething with anti-American and anti-Semitic hatred. Long before Obama came to power, Iraq was an Islamist country, rife with Sunni and Shiite militants who agreed on little else besides their devotion to sharia and their abhorrence of the West.

… but most observers note that Obama and Secretary of State Hillary Clinton didn’t care seriously about negotiating a SOFA with Iraq because they didn’t want U.S. forces to stay in the first place.

In addition, nearly every American would tell you that Barack Obama’s main platform running for President in 2008 in the first place was ending the war in Iraq on his timeline.

He even celebrated the withdrawal of U.S. forces from Iraq during the 2012 campaign.

No, Obama never intended to leave Iraq. Never made a big thing out of it at all. Certainly never mentioned it in 2012 pic.twitter.com/g8RNaSu3Kf

The facts of the matter remain that Obama ran on a platform of withdrawal, not victory. And when the Iraqi government pleaded since last August for help against ISIS, Barack Obama didn’t answer the call.

Speaking of that….have you seen this from Rob Lowe dissing the infant president?

Rob Lowe
Follow
Waiting to hear POTUS explain the disaster the world has become. Noticed what looks like an extra security barrier below his podium.

Obama said the troops would not have been protected from prosecution, so he had no choice but to leave. He of course claims any other argument is bogus. Rove claims a simple agreement from the president is more standard, even though parliament is legally required. Apparently Obama cares about the Iraq constitution more than ours.

“Graham told the story of his personal role in the negotiations during the draw down of U.S. forces in Iraq. He said when he and Sens. John McCain (R-AZ) and Joe Lieberman (I-CT) were in Iraq, Malik agreed to a “follow up force” being left in theater and it was the Obama administration’s intentional refusal to give the Iraqis a solid troop number that destroyed the deal.
http://www.breitbart.com/Breitbart-TV/2014/06/17/Senator-Graham-Obama-Administration-Lying-About-Iraq-Status-of-Forces-Agreement

Bush got parliament approval, but that vote was no longer going to pass. But now we have some boots on the ground, so something changed.

“We basically need a piece of paper from them,” another U.S. official involved in the negotiations told The Daily Beast. The official didn’t explain why the parliamentary vote, so crucial three years ago, was no longer needed.
http://www.thedailybeast.com/articles/2014/06/23/obama-does-a-u-turn-on-immunity-for-u-s-troops-in-iraq.html

If we can do pin pricks now, we could have done a major air assault on ISIS months ago, as they were exposed on the roads. We need to release the dogs of war, instead of being so restrictive and cautious on every engagement. Genocide of Christians IS occurring as Obama golfs, and Iraq could not get extradition of our pilots from the carriers. (though with Obama, who knows)

The easiest explanation is that Obama’s loyalty is to the Muslim Brotherhood first. That put his Christian killing tyrant in charge of Egypt, gets Kerry giving good deals to Hamas versus Israel, allowed the black flags to fly over Libya as ambassador Stevens was murdered, and pits Obama against Maliki.

Cameron has to go to Parliament . Obama is C in C .& does what he likes because the military belongs to him & him alone .

Yeeeup. PRETEND to give a damn when forced to that extremity.

Funny thing is, Pres. ScamWOW has been VERY strong on CERTAIN foreign policy.

He intervened in Honduras when their dictator was…well…getting dictatorial.

He made sure Brazil had U.S. money for development of its oil resources, while shutting down the Gulf.

He had no problem with the U.S. and NATO being the “Libyan rebel air force” when Qa-Daffy was a WHOLE lot nicer and less piratical than ISIS.

And he has NO problem leaning on Israel.

Yes, every time I think it is not possible for me to loathe this arrogant, hypocritical, lying, cowardly POS any more, he somehow finds a way to make me despise him even more.

The teleprompter made me do it!

And hope for a good lie on the fairway always…!!!

More SCANDAL from the Blame-O-Crat Party!

Dunno if you are old enough to remember Birch Bayh, but they’ve been doing that for many decades.

They are not very original, and rarely have a new thought. They just stick with the old lies.

I maintain the SOFA issue was not the gimme that your McCain types argue it was.

Did we really want to entrust the lives and freedom of American soldiers to a handshake agreement with a highly sectarian president in a country with no deep history of rule of law rather than rule of tyrant? If anything happened to Maliki, including a heart attack, would arrests and prosecutions begin, saying Maliki’s agreement was illegal?

Of course the counter-argument is to say no agreement would be necessary because US troops would go to war to protect their own from Iraq’s government if necessary. But one can see why it was preferable Iraq’s parliament ratify the deal, to ensure everyone’s fingerprints were on it.

But they balked, and so we have the current mess. And in fairness, Obama balked too, and the reports that he didn’t try very hard seem quite correct. But even Hillary who was pushing for troops to stay in some capacity thought the parliament ought to ratify. It’s just that mountains were not exactly moved to achieve that result.

ever heard the expression never up never in … so what if the SOFA was going to be hard work …. when you have no intention of doing ANY work on it (like Obama did) it is bound to fail …

Obama: “My 2008 campaign was lynch-pinned by my promise to get our troops out of Iraq and my 2012 campaign hilited that I did just that. BUT, I had nothing to do with our troops leaving Iraq! Oh, and if you like your insurance you can keep it.”

Our military leaders said this sort of thing was possible, if not likely, should we pull all of our troops out before there was a stable government and properly trained army in place. Of course Obama told us those things WERE in place; so much for the wisdom of politicians with no practical experience in the world.

Plain and simple: He’s a weasel.

It really is rather simple: if we had remained in Iraq this would not be happening. Whatever happens from this point forward will be vastly more expensive than had we stayed. This is not going away.

I’d forgotten about this one. I’m sure we were already covertly in Pakistan when Obama was campaigning as “tough on defense”, bragging that he would attack inside Pakistan, with Musharraf refusing (as opposed to Maliki agreeing).

“… They are plotting to strike again. It was a terrible mistake to fail to act when we had a chance to take out an al Qaeda leadership meeting in 2005. If we have actionable intelligence about high-value terrorist targets and President Musharraf will not act, we will.”

For Obama’s campaign opponents, the comments became an illustration of the idea that Obama was too inexperienced to be president — both for having the idea of acting without Pakistan’s permission, and for being green enough to tell people about it. </blockquote"
http://talkingpointsmemo.com/dc/flashback-2008-mccain-clinton-slam-obama-for-saying-he-d-go-get-bin-laden-in-pakistan-video

It came up in the debates later. Obama didn't care about Pakistan sovereignty then, nor about our soldiers being taken into their courts.

And rumors are Jarret was telling Obama not to go get bin Laden, but he finally had to relent, and make that "tough call".

Andrew McCarthy can be brilliant … this is not one of those times … maybe he forgot but Iraq was an Islamist country, rife with Sunni and Shiite militants who agreed on little else besides their devotion to sharia and their abhorrence of the West long before Bush was President. He’s trying to sell books I guess …

Saddam kept the Shiites down . Saddam ‘s Iraq did not put Sharia law as a high priority , it barely made the news 1980-2001 in Iraq.

I think he had to go to Martha’s Vineyard to receive his heavy doses of whatever they give him. I know heavy bi poplars who are hospitalised for 2 weeks each year .to manage any necessary changes in meds .

He goes in all limp & comes out fighting . Who remembers the American Jobs Bill Tour ?