Quotes Isaiah: Be comforted, my nation. 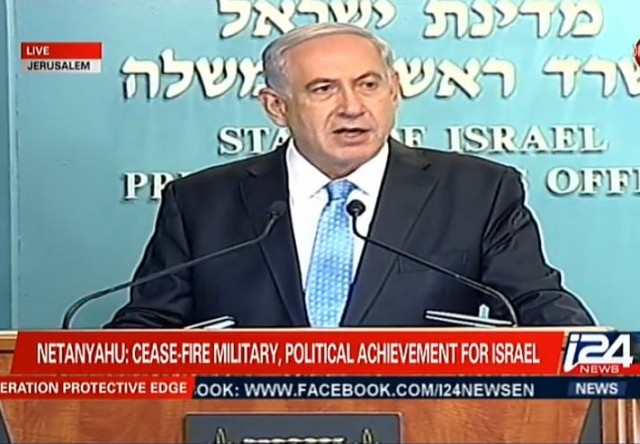 Netanyahu, facing increasing criticism at home, laid out the case why the Gaza conflict was a success: Hamas lost 5-7 years of military tunnel and rocket build-up, over 1000 fighters (including from other terrorist groups), and numerous senior leaders, but receive no benefit in the ceasefire agreement. Israel gained diplomatically among more moderate Arab states, and limited losses from rockets and ground combat.

I’ll have my own take on this (which basically agrees with Netanyahu) later.

I’ll post the video when available. Here are some live tweets:

Netanyahu at press conference: Cease fire is both military and diplomatic achievement for Israel. Hamas hit hard, and achieved nothing.

. @netanyahu: We have great military and diplomatic achievements. Hamas was struck hard, didn't get 1 of conditions it wanted for ceasefire

PM Netanyahu: This is the worst blow to Hamas since it was founded.

. @netanyahu: I think Hamas has become diplomatically isolated. We got legitimacy from world 4 our actions.

Bibi: Hamas demanded rehabilitation of its institutions in WB, money from us. It got none of this.

PM Netanyahu: The World realizes Hamas and ISIS are the same. 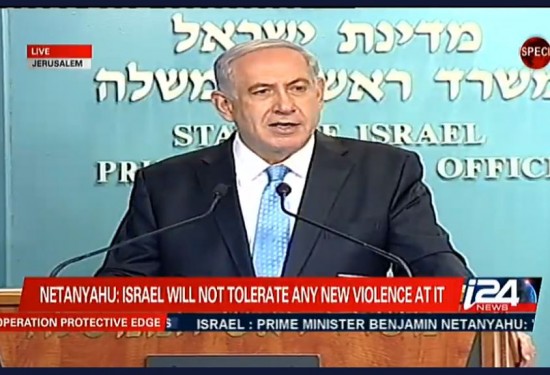 PM Netanyahu: All we have given is humanitarian aid to Gaza, and that we agree to regardless of Hamas.

. @netanyahu: I think Hamas didn't realize how strong and united our nation is. It's wonderful. 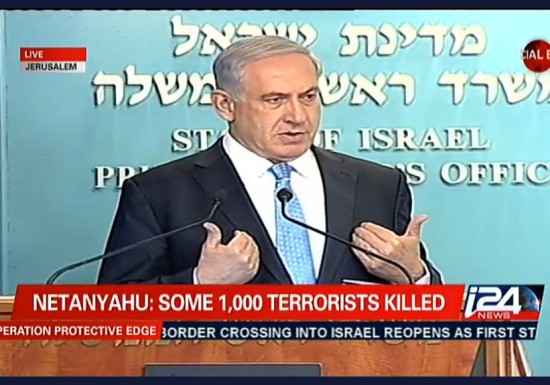 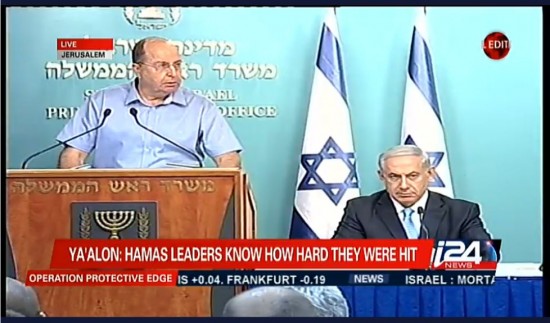 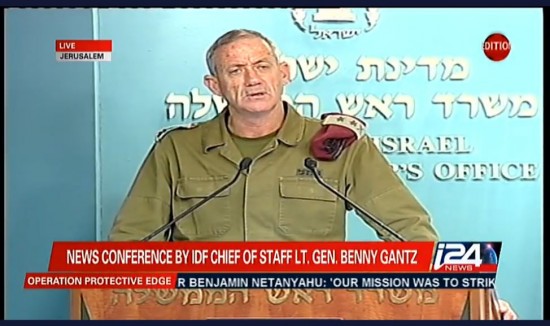 Gantz: This was an extremely complex operation, including in diplomatic context

Ya'alon: Don't get excited by Hamas leaders' rhetoric, delivered moments after they left bunkers defended by civilians above them

“@havivrettiggur: Bibi: I said we don't know for sure that long-term quiet is achieved. We do know Hamas is devastated.”

.@netanyahu: The goal we set was clear. Not conquering Gaza – ppl who suggested that didn't say what we would do w 2 million Palestinians. 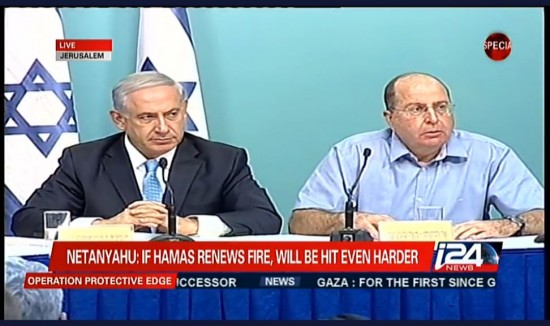 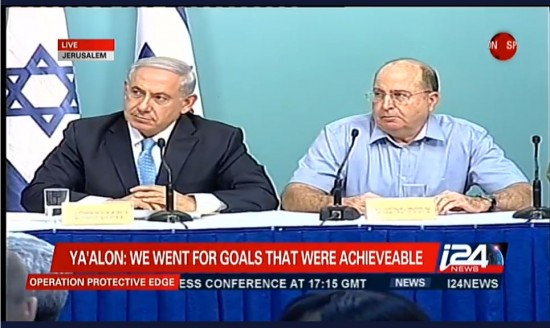 I’m curious which parties the residents of southern Israel ( the areas hardest hit by all the rockets from Gaza and most likely to be victims of Hamas fighters who infiltrate through tunnels into Israel) vote for? Does anyone know?

While I had hoped the IDF would be allowed to fight unto the complete destruction of Hamas my respect for Mr. Netanyahu buys him much goodwill in his decisions. Tactically to fight until Hamas surrendered would take many more weeks and would likely need US support. Who believes Team Obama would actively support weeks more of fighting?

With the ISIS fighting so near the Golan, and the larger threat from Iranian nukes perhaps Mr Netanyahu made the best tactical choice so that the IDF can face those even more urgent strategic threats to Israel??

If complete destruction of HAMAS had been the goal, Israel could have accomplished it in about 15 hours, using conventional weapons. The price would have been about 2M dead. Israel chose not to do this, out of concern for the lives of the people living Gaza.

Instead, Israel worked methodically, giving people in individual buildings warnings, phone calls, and warning shots before destroying Hamas installations, which were often beneath civilian housing, schools, mosques, and at least one hospital. This choice drew out the destruction and killing over time, so that Hamas had time to think it over, and choose whether to end their own bombardment of Israel. By this means, Israel has limited the numbers of deaths and amount of property destruction to the minimum Hamas would allow.

I think had the IDF moved back into Gaza and used ground troops, air assets, and armor they may have been able to shoot every member of Hamas within about a month of very tough fighting. That would be my suggested solution for Hamas. As we see with ISIS within meters of being in the Golan TODAY perhaps the PM didn’t not think another month was a viable tactical situation??

The only plan for actual peace for both Gazans and Israelis is complete victory of the IDF over Hamas…which sadly appears to be delayed.

Happiness would be an Hamas tunnel hitting a large oil deposit 50 yards inside Israel.

Kinfolk said, “Achmed, get away from thar.”

Buy/Sell Netanyahu? I’ll buy. I can’t imagine Hamas will be able to sustain internal support for continued militarization without a common enemy over the next two years. Can Hamas run a civil government after a failed military version? Dubious.

It might be interesting for Israel to develop an inexpensive silenced pistol and air-drop a bunch of them at random inside Gaza. Give the Gazans who aren’t Hamas supporters a real secret ballot.

Netanyahu may well be one of the greatest statesmen/leaders of these times.

Netanyahu has never had the spine to stand up for principle. To win the 1996 election, he accepted Oslo. Then he gave away Hevron. I haven’t trusted him since that day.

To this day he supports the “two state solution”, and Fatah, deliberely ignoring the fact that it is just as bad as Hamas.

He could have stopped the expulsion of the Jews from Gaza (one of the biggest crimes against humanity in any Western country in the last few decades), but he kept the Sharon government alive all the time that it prepared for that crime, and resigned only at the last minute, after he knew it was a done deal, just to escape being tarnished with it.

He talks a good talk, but so did Olmert, who gave one of the best speeches at the start of the last Lebanon war, and then totally screwed it up, and finally exposed himself as a complete leftist, willing to give away almost everything.

So who disagrees? Well, residents of the South do. They’ve fled their homes. Israelis do – Bib’s approval rating has hit sub-Obama territory. And the town where a four-year-old boy was recently murdered by a Gaza mortar do – they claim the army refused to do anything for weeks because two of the four mortars were near a school, and for the other two they were unable to warn the civilians nearby.

As for me, I have no idea. But I would like to think we are acting out of fear of the United States. That would be reasonable. If we are doing this out of “morality”, I just have to shudder.

If the reason was fear of 0bama, Netanyahu had a simple solution at hand: threaten to go public (no need to actually do so, the threat should be sufficient), and meanwhile privately inform the Congressional leadership on both sides of what 0bama is doing. No, I’m afraid the reason was not fear of 0bama but fear of the Israeli High Court, and of the IDF’s own JAG corps, who have been thoroughly infected with this perverted “moral” code.

Nice words. But Bibi’s whistling past the graveyard. Israel will never “win” until Islam is destroyed.