MRC’s latest riff on Chris Matthews gave us a thrill up the leg. 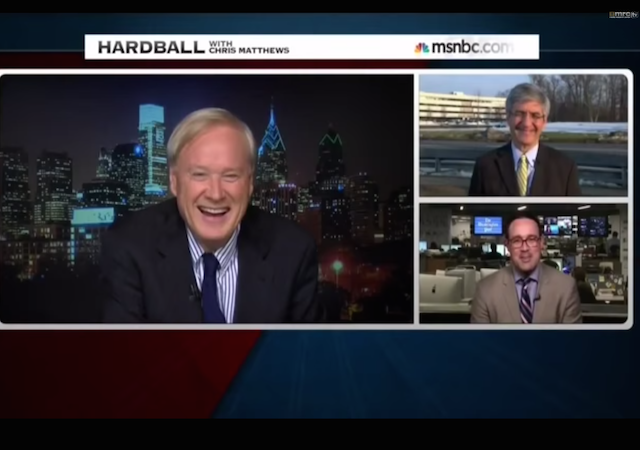 MSNBC may be sincere when it asks its audience to “Lean Forward” each night, but maybe they should have picked a less…riffable…slogan.

The Media Research Center’s new “#LeanOver” media bias campaign takes aim at the talking heads at MSNBC, and they’ve got plenty of material to back up their claim that “MSNBC is where news goes to die.”

The best part about MSNBCers is that their craziness really speaks for itself. All we have to do is show the American people.

MRC Director of Social Media Scooter Schaefer told the Washington Examiner that the goal of this campaign is simply to use social media to shine light on MSNBC’s bias:

“We’ve all seen the MSNBC ‘Lean Forward’ commercials. The inspiration for our #LeanOver parody was to demonstrate the absurdity of MSNBC by simply showing folks clips of MSNBC hosts like Chris Matthews in action,” he told Secrets. “After all, nobody can do a better job making Chris Matthews sound like an unhinged liberal partisan than Chris Matthews.”

You’ll be able to check out more #LeanOver videos here, as they come available.

Amy isn’t it supposed to be a tingle in the leg?

No, that’s the urban legend. He said “thrill” – that’s the original recording clip.

Hmmm. I like the idea but aren’t they close to running against copyright laws? Would this count as fair use?

Are you saying laughing at MSNBC isn’t fair?

I am trying to figure out, whether you meant that as a joke or are totally clueless. Sorry but on the internet it’s sometimes harrd to tell.

I am trying to figure out,…

Wouldn’t want you to hurt yourself, so….

Both parody and literary criticism are specifically listed as fair use.

I’d say this qualifies as both. 🙂

Hmm. I wasn’t aware of the literary criticism clause. I knew about parody, but don’t you have to change something for it to count as parody?
I think it cleary would fall under the spirit of fair use, but the courts can get ticky tacky about fair use.

Similar, but with different connotations and extended meanings, poking fun at the original.

I’m absolutely sure MSBNC and Chris Matthews won’t like it, but MRC is probably safe claiming parody.