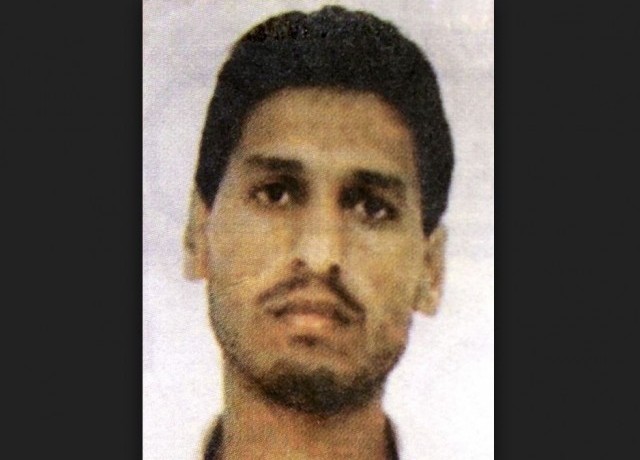 Mohammed Deif is the head of Hamas’ military wing.

Israel has made several attempt to assassinate him over the years, injuring but not killing him.

The latest was last night, but Deif’s fate is unknown:

Hundreds of Palestinians turned out on Wednesday for the funeral of the wife and son of the Hamas military chief Mohammed Deif, who were killed overnight in an Israeli air strike on a house in Gaza City.

Hamas had urged Gazans to turn out in force for the funeral in Jabaliya refugee camp, after an attack which left at least one other Palestinian dead and injured a further 15 people. There were fears that there could be more bodies under the rubble.

The fate of Deif, one of Hamas’s most senior figures who has survived Israeli attempts on his life in the past, is still unknown.

Hamas asserts Deif is alive, but that lack confirmation.

Hamas is trying to say it fired rockets in response to the attempt, but in reality the attempt on Deif came after Hamas broke the truce:

Israel has not officially commented on the report.

Deif’s wife and young child were killed in an Israeli air strike, the Hamas officials said. Hamas has not issued a statement on whether Deif was killed, and Israeli sources speculated Wednesday that he likely survived.

Hamas officials said the assassination attempt represented an Israeli violation of the cease-fire, but Israel says its air strikes came in response to rockets fired from Gaza while the truce was still in effect on Tuesday.

Background on Deif, from Amos Harel at Haaretz, Who is Mohammed Deif?:

Mohammed Deif, the commander of Iz al-Din al-Qassam, Hamas’s military wing, and a wanted man in Israel for about 20 years, has been considered a leader of this group since the mid-1990s. Israel, which made several attempts on his life during that time, stepped up its efforts to eliminate him when the second intifada was in full force. Emerging from the assassination attempts by the skin of his teeth, Deif recovered from his wounds and returned to lead Hamas’s military wing after its commander, Ahmed Jabari, was killed in an Israel Air Force strike on the first day of Operation Pillar of Defense in November 2012….

Deif was behind the kidnappings and murders of Israeli soldiers Shahar Simani in April 1994 and Aryeh Frankenthal in July 1994. In October 1994 he played a major role in running the terror cell that kidnapped and murdered Israeli soldier Nachshon Wachsman: He handed the orders to the cell that held Wachsman in a safe house in the village of Bir Naballah near Jerusalem.

Deif was also involved in the bus bombings that took place during that time.

We will update when more is known.

UPDATE: Hamas is claiming Deif is alive, Israel is silent:

Bibi refuses to answer directly the question as to whether Mohammed Deif was assassinated. All leaders are targets. #Gaza

Ehud Yaari points out that the Hamas statement about Mohammed Deif was more ambiguous than some reported. Doesn't explicitly say he lived

Israel ministers told it’s unclear if Hamas military head Deif was killed, but widespread assessments that he was hit http://t.co/J9HJG8Z6SL

“Hamas asserts Deif is alive, but that lack confirmation.”

A picture of him holding up today’s New York Times and waving would not be sufficient confirmation for anything Hamas says.

It will be a cold day in hell before I pay to read anything on Ha’aretz.

If he’s still alive, it would be better to let him live as a shining example of cowardice and failure.

“Deif’s wife and young child were killed in an Israeli air strike, ”

Translation: that heartless bastard set up his wife and child be killed for a photo-op, but he made plans to get away. We want you to believe he got away.”