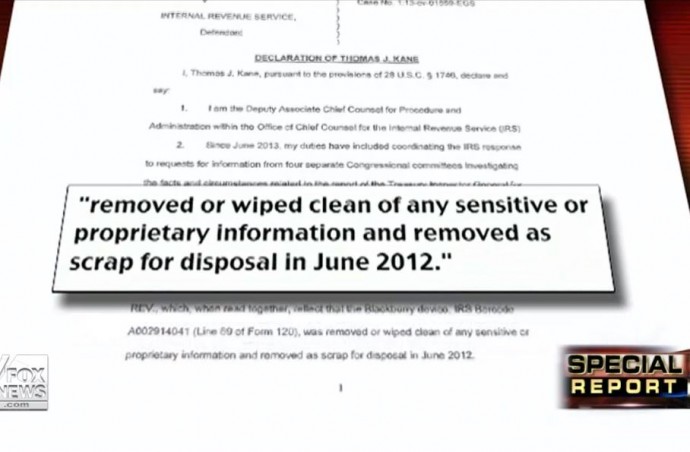 I’m a day late to this, but better late than never.

After admitting that Lois Lerner’s supposedly missing emails were in the back-up system, the IRS has filed court documents in response to a Judge’s Order indicating that after Lerner was summoned to testify before Congress, the IRS wiped clean Lerner’s Blackberry.

Lois Lerner’s BlackBerry was intentionally destroyed after Congress had begun its probe into IRS targeting of conservative groups, a senior IRS lawyer acknowledged in a sworn declaration.

Thomas Kane, Deputy Assistant Chief Counsel for the IRS, wrote in the declaration, part of a lawsuit filed by Judicial Watch against the IRS, that the BlackBerry was “removed or wiped clean of any sensitive or proprietary information and removed as scrap for disposal in June 2012.”

That date – June 2012 – is significant because by that time, ex-IRS official Lerner had already been summoned before congressional staffers who interviewed her about reports of the IRS’ targeting of conservative groups.

“We had already talked to her. Our personal staff and Oversight Committee staff had sat down with Ms. Lerner and confronted her about information we were getting from conservative groups in the state of Ohio and around the country,” Rep. Jim Jordan, R-Ohio, told Fox News.

“If you intentionally destroy evidence, that is a crime. If you make a statement in court saying the evidence is not available and it is, that is also a crime,” said Jay Sekulow, Chief Counsel for the American Center for Law and Justice.

I don’t know if Lerner had the ability to text and instant message on her Blackberry, but if she did, that also could be important since we know Lerner and others suggested instant messaging as a means of avoiding computer back up systems.

“Thomas Kane, Deputy Assistant Chief Counsel for the IRS, wrote in the declaration, part of a lawsuit filed by Judicial Watch against the IRS, that the BlackBerry was “removed or wiped clean of any sensitive or proprietary information and removed as scrap for disposal in June 2012.” ”

What is a lawyer doing, signing a Declaration as a fact witness? If he had personal knowledge of this when it happened, he should be planning on disbarment. Otherwise, he should not be signing the Declaration.

the gop does not care.
if they actually did they would have subpoenaed the exchange server admins.
repeated tweets to Issa about this had (as expected) no replies.
and it hasn’t been done.
they do not want to actually do anything about this.

the exchange admins are the ones who will know how retention and backup policies were applied to the exchange mailstores.

The indifferent and cowardly inaction of the GOP twerps is sad, but it is not dispositive. Judicial Watch has real plaintiffs and evidently a real judge, so this thing is far from over.

Every single IRS employee who had anything whatever to do with this, from Lois Lerner right down to the tech who wiped the Blackberry, should be fired and prosecuted.

It’s time to subpoena the phone company records of all the date/time/phone #s of Lerner’s messages before the NSA/CIA/IRS/HOLDERs destroy them.

I want her in jail. I don’t even care if it ultimately does not come timely. The only way imappropriately partisan bureaucrats are going to learn not to break the law is to start imprisoning wrongdoers. And then she needs to be sued in civil courts to the full extent of her pension above the poverty line.

It is a funny thing that all sorts of action by investigating committees is always promised. And it never gets here. And things like admission of criminal conduct by the regime are never followed up on. And contempt charges are never filed. And still the Institutionals still claim that they really, really want to fight the Left. If they just had any energy remaining after fighting their own base.

OK, so we put all of our energy into fighting – Lois Lerner. Let’s say we jail her – so what? The press will Gosnell it. It will never be made into anything meaningful. And have the applications been approved? I know Z Street was still waiting – and their sin is being pro-Israel.

I think we owe Richard Nixon and everyone jailed under Watergate, an apology and compensation. At this point, the only way to make sufficient amends would be to carve Nixon’s face into Mount Rushmore.

I’m beginning to think the IRS is hiding something. Something important. What could it be?

We could start with their temples, and work around to their eyes…

Or we could start with the soles of their feet.

Whatevs. I’m good any which way we do it.

And I’m being dead serious; we have to burn the tax code down, take this kind of power BACK and never return it.

Our government…according to its charter…needs only some fraction of what it takes now. And that is all we should EVER allow it to have.

And a tax code should NEVER be used for a social engineering bulldozer.

agreed.
the progressive tax code is one of the most intrinsically evil entities ever devised by man.
its ruined a nation.
the my fair share crap only means you did better at life then I did so gimme some crap.

Good idea. Might solve the illegal immigration problem at the same time.

I’ve been in favor of the Fairtax proposal for YEARS now. I wrote my tax law concentration paper on it for Law School (think a slightly smaller Thesis).

Burn down the tax code, implement a national sales tax at 22.5%, and suddenly you free up about $400 Billion annually in economic potential from not having to pay tax preparers, IRS staff and accountants, and restore about $2.2 TRILLION dollars in off-shore monies, as well as causing each-and-every major corporate headquarters of a fortune 500 company to be immediately relocated to the US.

Intentional destruction of evidence creates a rebuttable presumption that the evidence was incriminating/damaging for the party that destroyed it.

That will get you summary judgment in a civil trial. In a criminal trial, which this would be, intentionally destroying evidence before it’s in the hands of the prosecutor is sound strategy. The prosecutor can’t claim the destroyed records covered up any specific crime without other corroborating evidence of that crime. Since Lerner controls all the alleged evidence, QED.

If this were, say, an SEC investigation destruction of records would be a crime by itself, even if the underlying acts described in the records aren’t criminal. I’m surprised that isn’t so here.

Naturally, this strategy only works if the defendant works for the government. Private parties aren’t held to so lenient a standard.

What needs to happen is the FBI walking into the IRS headquarters and take what they need without warning. That’s what would happen if Lerner didn’t work for the government.

Oh it’s still it’s own crime. It just has a much smaller penalty. It would probably be punished by a fine and court costs.

Don’t think for a moment that the DOJ is not colluding with the IRS in this cover up.

Don’t think for a moment that the DOJ is not directing the IRS in this cover up.

Until someone goes to FPMITA prison it doesn’t mean a damn thing.

And so far none of this means a damn thing.