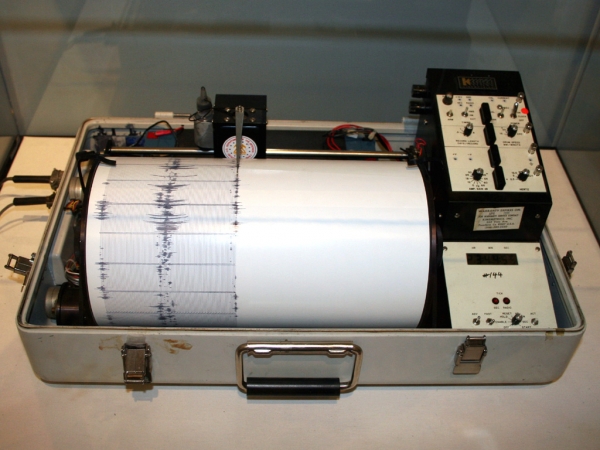 As I was enjoying the history and the beauty of Virginia on the last day of our family vacation, a significant earthquake struck Northern California.

The aftershocks are continuing from the magnitude 6.0 shaker that caused over 200 injuries, mainly lacerations and bruises from falling debris. Most tragically, because of where the epicenter was located, a lot of fine wine was destroyed.

You would think Californians recognize that our state has had a long history of major earthquakes, including the famous 1906 catastrophe and the destructive Loma Prieta quake in 1989, and that this is a reasonably anticipated hazard associated with life in the tectonically active Pacific Rim.

And you would be wrong.

It seems that global warming is at the center of every natural disaster. Here is the current theory being offered: Global warming has caused the drought (ignoring California’s long history of drought cycles). The evaporation of water as a result of higher temperatures has made the crust lighter. So our state’s surface rose, which caused the earthquake.

“I understand the tensions caused to the earth by the drought and also by fracking for oil is leading to increased seismic activity,” said Maria, a caller to a recent radio talk show who described herself as a beautician and mother of two. “How can we know for sure what the impact is of anything we’re doing to the environment? Are we going to cause ‘The Big One?'”

Said Tony, another caller to the same afternoon radio talk show: “I think nature’s working against us because we’re not taking care of nature … it feels like something more is coming … I’ll send you my forwarding address.”

CalWatchdog.com talked to Dr. Adrian Borsa from the Institute of Geophysics and Planetary Physics Scripps Institution of Oceanography University of California, San Diego. Borsa and his research team recently completed the study discovering the uplift from the massive loss of groundwater in California, which is the core of this new global warming disaster scenario.

He discounts this theory entirely:

“The Magnitude 6.0 Napa earthquake is a typical event for the very seismically-active area where it occurred. The plate motion there is strike-slip, which primarily generates horizontal stresses, and the slip from this earthquake was primarily horizontal.

“There certainly can be a tectonic component to the vertical motions recorded by GPS stations, but this tectonic motion is very slow and appears as a linear trend in our data. We remove linear trends (along with seasonal signals) for our analysis in order to isolate multiyear signals such as those generated by changes in water loading from the drought.”

I must also point out that other scientists have concluded fracking doesn’t cause earthquakes either.

Human activity associated with oil and gas production can sometimes cause earthquakes, but the problem is not hydraulic fracturing, a seismologist from the University of Texas told researchers gathered for a two-day conference on Marcellus shale-gas drilling.

When the rare quakes do occur, they’re typically linked to the disposal of drilling fluids in underground injection wells, Cliff Frohlich said Monday at West Virginia University. And the vast majority of injection wells don’t cause quakes, either, he said.

After dealing with the drama of “climate scientist” man-caused disaster scenarios, once again, I need to pop open the lovely bottle of craft cider I brought from Richmond. I need another drink, and our wine supply is a bit low.

“When the rare quakes do occur, they’re typically linked to the disposal of drilling fluids in underground injection wells…”

I hope he actually said no such stupid thing.

“Drilling fluids” are rarely injected. What IS injected is brine FROM the productive zone. Oil field brine is pretty much ubiquitous, which is why you almost always find an appliance called a “separator” on a producing location. It separates the oil fraction from the water fraction of what comes up the well-bore.

Brine is usually injected into wells that have essentially stopped producing oil or gas, and helps drive oil and gas toward still-productive wells. This is in what are called “unitized” fields.

Brine is BEST re-injected, since it is highly saturated with salts. You would not want to water your garden…or pasture…with it.

3 years ago, I worked as a pipeline engineer for a gas production company in Pennsylvania. From what I picked up, they started with fresh water and added sand and minute amounts of some chemicals to fracture the first well (not sure what chemicals because that wasn’t my area of expertise – HCL was one). Explosives create the initial fractures in the rock, then high pressure water expands the fractures and carries the sand with it. Then the water would flow back out of the well, leaving the sand to hold open the cracks in the rock and allow the gas to flow out. When the water came out it was dirty-looking and had relatively high levels of salt and iron that it picked up from the rock and pipe. The water was then treated to remove the iron and re-used in subsequent wells. When the water gets so dirty that on-site treatment is no longer effective for cleaning the water, it can be hauled to a treatment plant where it undergoes further treatment or to Ohio or West Virginia and injected.

Our state has been treating brine water over 100 years and treatment facilities that existed before the shale gas boom are permitted to discharge the treated water to streams and rivers. However around 2011, the state cracked down and since then I gather it is virtually impossible to permit a treatment plant, hence the trend toward injection.

I recall that the treated water from the plants still has trace amounts of salt that aren’t a problem at current levels (and haven’t been in the past 100 years), but could become dangerous to wildlife with too much increase in volume. However, we put millions of tons of salt on our roads that eventually ends up in streams and rivers, so I attribute the policy change to the anti-drilling crowd.

Yeah, your first paragraph describes “fracking fluids”. In my experience, we also added gells and surfactants to make everything flow better (I suppose, not being an engineer).

“Drilling fluids” are often a good part oil field brine, since it has such a high specific gravity. Part of the function…a VERY important part…of “drilling mud” is well pressure control. When you have a column of mud several thousand feet tall, you have considerable down-hole pressure that is INTENDED to contain pressure you might have out of the productive zone YOU HOPE you’ll hit.

This is why on a drilling rig “losing circulation” is an “OH, SPIT!!!” moment. You just lost your first defense against a blow-out.

In my formative youth while roughneckin’, I’ve schlepped innumerable numbers of bags of drilling mud, armloads of straw, sacks of cottonseed hulls, bucket fulls of nearly anything that could serve as refractory and help restore circulation. Old timers said in a pinch, it wasn’t unusual to throw in prickly pears and cow manure!

I’ve lost count of the brine trucks we had unloaded on us. That one man-made object is probably the very definition of ubiquitous; they all look alike, especially at 0300. So do the drivers.

Yeah, in the Permian Basin, it wasn’t unusual to drill into all kinds of fractures and cavities that sucked out all your mud. I’m sure folks in China had that sh!t coming up in their gardens and outhouses, even. In the worst cases, they had to run casing, because it might take days to fill up these voids. So, far from screwing up the subsurface, us redneck roughnecks actually filled in some of lil’ old Gaia’s cavities!

“liberal = mental disorder” — A person has to be totally whacko to even think “global warming / climate change” has any relationship at all to tectonics!

If you received what passes for education these days then the correlation between global warming and earthquakes is a no-brainer … literally.

Let me get this straight… you are going to take the word of a pointy-headed science feller over that of a mother OF TWO (not merely one) who is also a beautician??

Therefore (a little science lingo there) it is important for all Californians to put on as much weight as possible to help stabilize the crust and prevent earthquakes. Burger King meals are a good source of calories.

Well at least it wasn’t the passing of a near-Earth asteroid that was being blamed on global warming. That is still THE #1 liberal, bonehead global warming scare antic. Though this ranks pretty high in ineptitude.

The corrupt hysterics of the left will say anything to useful idiots in the hopes it sticks.

For all the nutjobs who believe that climate change/oil drilling caused this weekend’s quake, please stay off sensible, intelligent websites. I suggest Youtube or Wiki.

The South Napa Quake M6.0 was not an unusual seismic event for that region. In 1898, the same general location experienced a M6.3 event. It was known as the Mare Island quake. Stop subscribing to these blog sites that often do not have all the information.