Illinois Dem Says Nasty Things About GOP in English, Gets Even Nastier in Spanish

Illinois Dem Says Nasty Things About GOP in English, Gets Even Nastier in Spanish

Illinois Democrat Luis Gutiérrez: “They want to punish our community.” 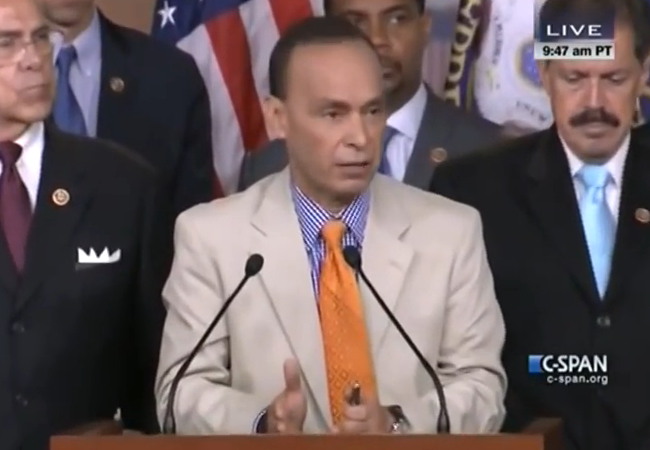 Remember back in 2010 when Obama urged Latinos to “punish our enemies?”

Illinois Democrat Luis Gutiérrez took that concept to a whole new level at a press conference about immigration reform this weekend.

Flanked by members of the Congressional Hispanic Caucus, Gutiérrez offered remarks in English and then Spanish but his tone changed significantly in the second half.

Andrew Johnson of National Review has the details and the English translation:

Gutiérrez​ in Spanish Remarks: GOP ‘Want to Punish Our Community’

Representative Luis Gutiérrez​ (D., Ill.), one of the most prominent proponents of comprehensive immigration reform, offered a noticeably harsher message about Republicans when he switched to Spanish during a recent press conference.

Joining the Congressional Hispanic Caucus as the House awaits a vote on a border bill, Gutiérrez​ first spoke in English, criticizing Republicans’ approach to addressing the border crisis and accusing them of putting political gain over helping the unaccompanied children crossing the border. The remarks were critical, as one would expect; the furthest he went was to claim that Republicans speak about Hispanics “almost as though we are a vile, repugnant community to them that they vilify and demonize in every one of their statements.”

He then said he would make some remarks “en español.” …

They know he’s going to act soon — they want to maintain this crisis to condemn our community, a community without rights for our kids at this moment, our DREAMers, and for millions of others that the president has said he wants to help. That’s what they want. They want to punish our community, and that punishment will be met with an electoral punishment. Be assured that we are not going to forget the mistreatment our community has received.

So much for that “new tone” we were all lectured about.

Time for a full investigation of Mr. Gutierrez.

Let me see if I have this right. His community is lawbreakers, who are illegally in this country and can’t legally vote.

And they intend to “punish” the GOP at the ballot box. He pretty much brags that non-citizens are going to vote against the GOP in retaliation…

Look at his district, which is one of the most notorious gerrymanders in the nation. It looks like a pair of headphones placed on their side. It was drawn that way to unite a Mexican neighborhood with a Puerto Rican neighborhood without the need to chop up the traditional west side black congressional district.

What a little racist puke.

He always has been . How he can have any rspect in the camber speaks volumes for Obama’s lawlessness

Mark Levin read this shitbag’s political resumé on his show the other night. He is a member of every socialist, Marxist, radical Left group you can imagine.

So HIS community, which consists of foreign citizens, is more important to him than his country, the Constitution, his oath of office, the voters in his district or the rule of law. That should be treason!

Treason? In the Peoples’ Democratic Politburo of Chicago that is simply business as usual.

“Move along, nothing to see here!” — Lt. Frank Drebin

I’ve read and heard this person’s remarks on the subjects of “immigration” and amnesty over the years, and they’ve always been charged against those of us who believe in obedience to the law and national sovereignty. I consider that vile and repugnant.

Why is Gutierrez even speaking in Spanish? Is it because Spanish is the de facto 2nd language of the US? Wasn’t supposed to be that way according to Teddy ‘The Swimmer’ Kennedy after ramming through the Immigration Act of 1965.

oh yeah . The old lion of the Senate . The same Lion who made more trips to the USSR than Khrushchev ?

Remember, Obama told us our children had to learn Spanish.

Ha-ha, or rather ai-yai-yai, how passé, or passado, or something like that, the overlords’ language will be Chinese, better learn that

I’m far from being convinced of that.

Is ‘Louise’ thinking that another..

“The nationalists, all identified as Lolita Lebrón, Rafael Cancel Miranda, Andres Figueroa Cordero, and Irving Flores Rodríguez, unfurled a Puerto Rican flag and began shooting at the 240 Representatives of the 83rd Congress, who were debating an immigration bill.

I’m sick of this “our community” garbage. Imagine how the leftopaths and the Latino racists would react if blond, blue-eyed people spoke of “our community” and vowed to “punish” anyone who did not promote their “community’s” advantage.

Do you think Gutierrez et al. would have the slightest sympathy for a bunch of gringos who started massing around the beaches of Mexico and claimed they had a right to live there regardless of what Mexican law said? And then whined about the Mexican government punishing their “community” if it said they could not?

I am a big fan of symmetry.

Think of the border just as you would between the states. The right to travel is a mutual right. If citizens of California can freely travel to the other 49 states then it would be illegal and wrong for California not to allow entry on the same terms.

A reasoned border debate would demand no less from Mexico, or the other Central American counties.

Would the six northernmost Mexican states prefer to seek statehood, in the U.S.A.? This would at least offer a reciprocal right to travel and live, under common federal laws. Debate on such a statehood request would disrupt the vile racist diatribes of folks like Gutiérrez, and the inherently vile racist Congressional Hispanic Caucus.

IMO, Gutierrez has less interest in helping poor Guatemalans and Hondurans than he does in crushing the American culture and punishing the “Anglos” for building a more desirable country than his own “community” has done.

The people coming up from south of the border (or from Puerto Rico) do not want to live in a country that was predominantly shaped by people who look like themselves. It’s true that many of them are indigenos fleeing from a predominantly Spanish ruling class, but that is not always so. In any case, they prefer to live in a country that’s still predominantly white European, and whose institutions were created by white Europeans. Doesn’t that make the illegal aliens “racist”?

Hey this is my state you are talking about! The home of the bold face lie and the land of the fix. Gracious, and we’ll see about that!

Right now we don’t have enough out of work tattooed Latino gang members yet to balance the number of out work black street gang members! C’mon. Give us egalitarianism!

The legal immigration system already permits the importation of almost one million new unskilled Democrat voters every year for the purpose of keeping American wages depressed. Are Americans ever going to wake up and stop being patsies?

i’ve got a little espnol for you luis. “hey cabron”.

Ok, we get it, Luis. You hate America. Now, will you just go away?