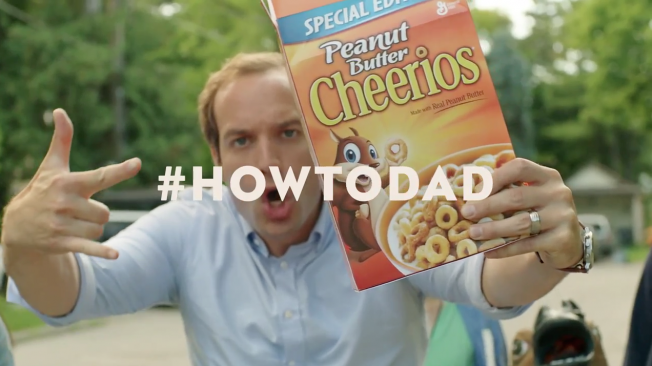 God bless Cheerios for their latest ad campaign. Forgoing the tired and insulting schtick of the ‘dumb dad’ who is too inept to tie his kid’s shoes, General Mills decided to highlight the awesomeness of dadhood to promote Peanut Butter Cheerios.

The longform web ad begins with a man waking up to find his kid sitting on top of him wearing a horse head mask. The man’s response? “Is that a new mask? I like it. It’s really creepy. Good stuff.” And it just gets better. Getting right to the point, “Hey, let me introduce myself. My name is Dad and proud of it and all dads should be.” Take a look:

Far too many companies choose to portray fathers as bumbling morons or inconsiderate burdens. Take this cringeworthy Kraft commercial for example, “here we go again, Dad always messes up everything! Thank goodness Kraft Mac N Cheese is here to save the day, otherwise Dad would really be an intolerable oaf.” Not an exact quote, but that’s the gist:

It’s so refreshing to finally see dads portrayed as the awesome and integral members of the family unit that they are. Hopefully more companies will take a queue from General Mills and make dads the star of the show; they’ve certainly earned a little time in the spot light.

I thought that made some very good points.

I’m glad you posted Klaven’s defense of men as I’ve grown very weary of the put downs in recent years. I’m a female who likes the simple fact that men are not.

And the world would not be better if only women ran it!

The only legitimate reason to fault men for foolishness, is letting women and 18 year olds vote. (Grinning, ducking and running now 😉 )

Giving women the vote; 18 years olds the vote; and stripping the states of choosing senators.

All fine and good, but where does it leave us actual dumb dads?

If you’re thinking twice: YES, view the ad. Yes, it is an ad, but it’s energetic and uplifting. Best line: “Hot stuff coming through: wife AND the coffee”.

Very glad to see an ad with a father (and a white male with white children no less) actually portrayed as competent and in control of things.

Unfortunately, this ad is outnumbered at probably a 5,000 to 1 ratio, and I’m being generous. Let’s hope it represents a new direction and trend in advertising, but I won’t be holding my breath. Btw, nobody’s asking for wives/women to start being portrayed as idiots. I think you can advertise a product without portraying anyone as an idiot.

Another bit of negativity from me, again… I apologize: encouraging as the portrayal of the father may be here, this commercial is still part of an overall trend of modern commercials which are over long, overly impressed with themselves, and spend 99.9% of their runtime having absolutely nothing to do with the product for sale. That will always annoy me.

a priori: normal ‘uncontrived’ women prefer men who are good-as husbands and fathers.
Why do women want to emulate men and emasculate them at the same time?

Sad that the state of advertising is such that this ad stands out so starkly.

I am not sure what to make of the Sprint “Framily Frobison” ads in which dad is a talking hamster inside a plastic hamster ball. The wife and mother, billed by Sprint as the voice of reason, is instead horribly insipid. One son is a freeloading Goth who always insisting his name be pronounced gor-Don rather than Gor-den. The other adult son, Chuck, is supposedly away at college but seems to be home all the time. A younger son looks like he could be the brother to the young banjo player in Deliverance and cause a parents’ teacher meeting when he asks his hackneyed female elementary school teacher to join their framily. The daughter only speaks French. Grandpa is African American. The crazy artist aunt is Hispanic. Oh,yes, in one ad the hamster is bowling.

What on earth are they trying to say about the American family?

Whenever we see a commercial making white males look like boobs, my husband and I cross that product or service off our mental lists of Who ya’ gonna call? and Whatcha gonna buy?

Ditto for ads promoting homosexual and interracial couples under the appearance of normal.

Well I had already enjoyed your comments here a lot, now I have to enjoy them all the more.

And the funny thing is? I was a HARD core leftist just like 2 years ago. The Trayvon fiasco was the thing that really put a crack in my mental bubble. Now I’m about as far in the other direction as you can get.

I’m looking forward to more whites waking up to the all out war on us taking place globally. How deliberate and calculated it is is up for debate, that it is taking place is not.