Has Obama checked out?

Has Obama checked out?

Did he ever check in? 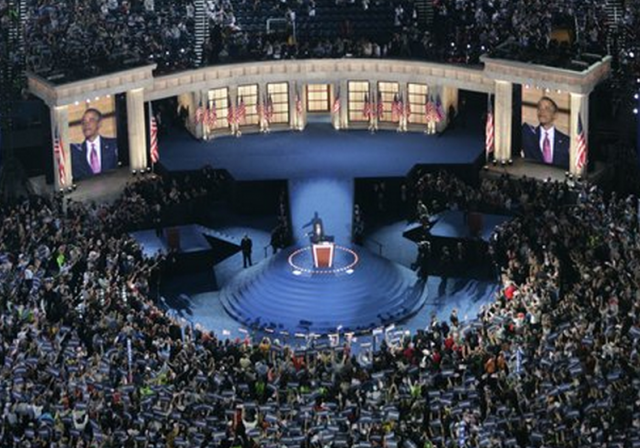 We keep hearing that Obama has checked out and is no longer interested in being president.

But was he ever especially interested in the work of being president? From the very start, what seemed to interest him was giving speeches and campaigning.

For the rest, he appeared to believe that just being his glorious self would somehow magically cause all the things he wanted to happen to actually occur, with a minimum of effort.

And although that sounds rather deluded, in a sense it was reality-based in his case. Isn’t that more or less how much of his life had gone until now?

Obama never was very engaged with the work of government, although much of his career has been spent in government. As president, even his signature “accomplishment” early in his administration, Obamacare, was designed and pushed mostly by others (Pelosi, for example), who did the heavy lifting for him.

That doesn’t mean he’s not an ideologue with leftist goals; it merely means that he wasn’t very interested in the day-to-day specifics of the hard work he’d have to do to reach them.

Obama is used to adulation and feeds off it, and when the adulation stops he doesn’t seem very interested in going on with the activity. Campaigning and elections are tailor-made for a personality such as his. They feature speeches and promises and debates (words) rather than the need to work with others and accomplish something concrete. The main activity is travel—constant movement—and speaking before adoring crowds.

Most important of all, they are time-limited and have an easily-defined and perceived payoff—the election results, which Obama has almost always (with the single exception of his run for Congress to unseat Bobby Rush) won handily.

Campaigns last about a year or a little more, and then the candidate gets his/her reward. It is a relative sprint compared to the longer-distance race that is a presidency, especially a two-term presidency.

Finally, we know that Obama is easily bored. No less an expert on Obama than Valerie Jarrett has said so, in the strongest possible terms: “He’s been bored to death his whole life. He’s just too talented to do what ordinary people do.” That, from the woman who (except for Michelle) probably knows him best and is closest to him.

So, no surprise. Perhaps Obama hasn’t checked out because he never completely checked in.

Apparently it’s also everyone else’s fault he never found something worthy enough to challenge him.

It’s pretty hard to challenge someone whose interest in/knowledge of any given subject is about an inch deep.

There is a reason why, after three years in Harvard Law School, Obama needed a claims adjuster to explain to him how his own auto insurance policy worked (and it wasn’t because Obama was the smartest guy in his contracts class!).

“Obama never was very engaged with the work of government, although much of his career has been spent in government.”

Here, I respectfully disagree. He has been an office-holder. That is NOT governance. Indeed, it CAN be the opposite.

My read is that, having aimed the ship of state for the rocks, Pres. ScamWOW has lashed down the helm, and his only real interest at this point is making sure no one rights the course he’s set.

This leaves him plenty of time to play.

‘You know he didn’t get up there by himself, he doesn’t belong up there, he doesn’t know what to do while he is up there, and you just wonder what kind of a dumb ass put him up there!.’

What makes him too talented?

Convincing tens of millions of people that he’s serious, when all he is a slick salesman pitching “progressive” snake oil.

I am kinda hoping this secretly means he will resign…
….or maybe will finally come out of the closet and propose to his gay lover chris matthews on msnbc then they can both jump off the top of the empire state building.
after admiting he is a arab marxist. *l*

“He’s just too talented to do what ordinary people do.”

That’s a good one! Tell me another fable ~

I heard David Horowitz on the radio recently. He said the left has no interest in governing – they are only interested in destroying.

“Bored”? That’s a front. Obama is a faker. He’s acting at being president, just as he’s been acting at pretty much everything his entire life (while others do stuff.) He spouts lines for the audience, makes speeches, feels comfortable with other actors, bullshits stupid rich people for money, and beyond that, there’s absolutely nothing there going on. Everything he does is the movie about Obama.

I’ve believed for years that Obama is the “life imitates art” instantiation of the movie “Dave”, except Dave was a more humble person.

What will Obama do when he retires to the Malvinas Islands. ?

ANSWER: Upon leaving whatever’s left of the White House, The Infant Majesty will never, Never, NEVER, N*E*V*E*R Ever have the class to shut his F***ing Pie Hole. Just ask his brother in malignant narcissisim, Billy Clinton.

He’s been bored to death his whole life. He’s just too talented to do what ordinary people do.

Well, he IS one of history’s most profligate liars.

..and he can hoodwink the best of them.

“… he can hoodwink the best of them.”

The Best of Us have fought him tooth and nail from the start. The pinheads, low info voters, Lib-Lefties, the CPUSA, etc, etc. bought him toothless & nailess ’till this very moment.

he pulled the biggest con in the history of the world. despite the damage he has done and continues to do there are 40% of the population who would happily and greedily drop to their knees and blow him on command. prog drones make me sick.

Yep, Paul…And, to my aghast eyes, after witnessing his AWOL Perpetual Campaign//No Leadership for 4-years, the koolaid consuming-low information doofuses helped the Lib-Left put him back in office so he could REALLY do some serious damage. NEVER have I been so afraid for my great country. “A World Turned Upside Down”. Truly that, Melanie Phillips.

He is indeed talented! First he told us he wanted to “fundamentally transform” this country and then he sat back while other people jumped to accomplish this goal for him. All he had to do was spout a never ending fountain of high grade bullshit and watch the show as the Lunatic Left and parts of the Mundane Middle ate it up with a ladle. Now that’s> TALENT!’

Tranzi’s the world over are simply agog over the way he sold this country their unAmerican agenda, and made a majority of us kiss his ass in the process.

He reminds me of some of the new hires I had to deal with overt the years who had OD on the self esteem fad in many elementary and secondary education systems. These new hires were always OK for the first couple of weeks when I was watching them closely and providing lots of positive feedback. But they never became truly productive because they became bored as soon as the constant stroking slowed down. Then it was on to a new job where they’d again get praised merely for showing up. .

I’d try to explain that an employer assumes an employee has basic competence an stops praising them for merely competent output after the first few weeks. That a real professionals knows that praise should mean something, that it should be reserved for exceptional work. Those who had become addicted to being told how special they were simply could not function without constant stroking.

Reading your post brought back nightmares for me. At the height of the Internet boom the software company I was part of bought a smaller company in southern California. It was totally staffed by < 25 year-old kids who had been brought up in the coddled leftist culture which you describe. It was impossible to get them to do anything other than bicker with each other and management over who made the most money or who was the 'best' programmer on staff. At that time they could (and did) hop from job to job, demanding 20% raises with every jump, often after just a few months on the prior job. It was an absolutely poisonous atmosphere. We eventually had to shut the office down and move the product back to another part of the country where there is (was?) a serious work-ethic as part of the culture. That was over a decade ago… I'm afraid the prog disease has spread to other parts of the country at this point.

“He’s been bored to death his whole life. He’s just too talented to do what ordinary people do.”

Well, then, Obama (an Al Green wannabe) must be an ‘arteeeeeeeeeest.’ He IS the second coming personification of Karma Chameleon.

“In an interview, Culture Club frontman Boy George explained: “The song is about the terrible fear of alienation that people have, the fear of standing up for one thing. It’s about trying to suck up to everybody. Basically, if you aren’t true, if you don’t act like you feel, then you get Karma-justice, that’s nature’s way of paying you back.”

I well remember the Boy King’s attendance in a baseball broadcast booth early in his presidential immaculation. He told the guys that being a Chicagoan he was a longtime enthusiastic White Sox fan. One of the broadcast guys asked His Infantile Majesty who his favorite ChiSox player was… Mister Smartest Guy in the Room couldn’t name one. Ummmm..a ‘tell’ mayhaps, I think. ((-:

It has long been a source of morbid fascination for me that Mr. Special wasn’t even a blip on anyone’s radar screen at Occidental and NYU(or, was it Columbia..? WhoTF Cares..?) Then—another ‘tell’—as Harvard Law’s review “editor” he published NOT ONE article of his own. That’s darn near unprecedented at that publication. Nor have the transcripts of any of the above been okayed for…cough…our undeserving middle class eyes. Ya know, kinda like John Boy Kerry who, ya know, served in Vietnam for 4-months 45-years ago and hasn’t allowed his Navy Records published. All those heroic wounds and not one day of work missed.(??!!)

I’ve been working 3-days per week at a really good traumatic brain injury place out in east Orlando for the past year+ and have been astonished at how common it is for those damaged guys to take on the mantle of Smartest Guy in the Room. Hhmmmmmmmmm….((-:

I’d love for Obam-Bam to unexpectedly be asked in an interview: “Mr.President, what are your 3 to 5 favorite books on the Arabs? And, as a follow-up, Mr.President, what are the last 5 or 10 works of history, contemporary foreign affairs and/or biography, Sir?” (*Speaking of Arab history, the Great Dr.Bernard Lewis was a regular—“under the treeline/MSM radar—visitor to the White House during Mr.Bush’s 2-terms. So, too, was Dr.Fouad Ajami, I think.*)

Obama isn’t bored, he’s overwhelmed! Barry is in way over his head and he knows it so he resorts to the Alinsky/Community Organizer tactics of diverting attention to one he can demonize as the cause of his problems.

This will remain the best picture of his presidency: when he got clocked in the mouth:

Though it does rival the photo of him picking his nose at a press conference:

Sorry, that was Hillary Clinton. May this one: