Guess who was missing at funeral of highest ranking officer killed in combat since Vietnam War (Update: Hagel attended)

Guess who was missing at funeral of highest ranking officer killed in combat since Vietnam War (Update: Hagel attended) 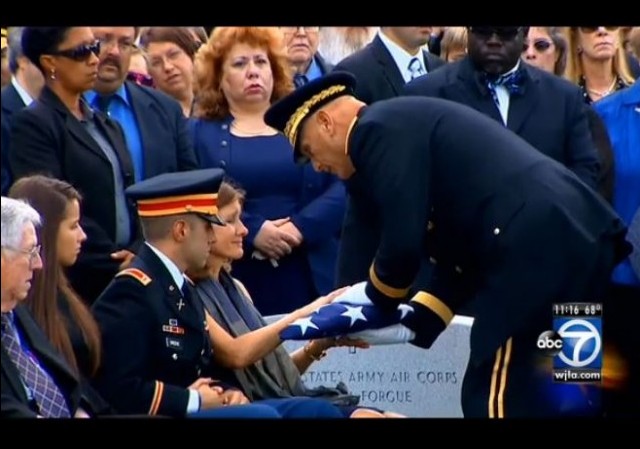 U.S. Army Major General Harold Greene was buried today at Arlington National Cemetery with full military honors, including a caisson, two escort platoons, casket team, firing party, colors team, and a caparisoned horse. The U.S. Army band, “Pershing’s Own,” played softly as the funeral procession made its way down the long hill past the rows of simple white gravestones to bring General Greene to his final resting place.

The graveside service began with a few words, followed by a 13-gun salute. The major general’s widow, Dr. Susan Myers, was seated in the front row. To her right was their son 1st Lt. Matthew Greene, his daughter Amelia Greene, followed by Major General Greene’s father, also Harold Greene.

After three rifle volleys and the playing of “Taps,” the American flag, once placed on the major general’s casket, was carefully folded as the band played “America the Beautiful.” U.S. Army Chief of Staff Gen. Ray Odierno presented the flag to his widow, and additional flags to his children and father.

General Greene, 55, became the highest-ranking fatality in the war in Afghanistan after an Afghan military police officer opened fire on Aug. 5th, 2014.

Each member of Gen. Greene's family lays a red rose on his casket. This is his widow. @nbcwashington #ArlNatlCemetery pic.twitter.com/edS8g9ehXs

Some people were missing at the funeral:

Update 8-16-2014: Byron York confirms Obama was on golf course during the funeral:

To those who asked: Yes, Obama was, in fact, on course at Vineyard Golf Club during Gen. Greene's funeral.

Update 8-18-2014: Byron York reports that the original tweet referenced about Hagel not attending was wrong (and corrected by that person), and the tweet about prior presidents attending funerals was part of a deliberate attempt to spread misinformation by a Howard University law professor and former Colonel (who is an Obama supporter), and was trying to embarrass people who believed his tweet:

Davis’ tweet referred to Maj. Gen. John A.B. Dillard — that last U.S. general killed in combat — who died when his helicopter was shot down in Vietnam on May 12, 1970. Davis’ tweet also referred to Lt. Gen. Timothy Maude, who was killed in the September 11, 2001, terrorist attack on the Pentagon. According to Davis, the Dillard funeral was attended by then-President Richard Nixon, and the Maude funeral was attended by then-President George W. Bush. Obama, Davis said, broke that tradition by skipping General Greene’s funeral.

I played a role in that. On Saturday morning, I tweeted, without comment, a link to the original Legal Insurrection article. A short time later, I added the following:

I was wrong. It turns out Defense Secretary Chuck Hagel did, in fact, attend the Greene funeral, a fact I should have known. Before sending out the tweet, I made a couple of perfunctory checks to see whether Hagel had attended, didn’t see him in the news coverage I read and passed on the information without further checking. If I had looked into it just a bit more, I would have seen, for example, a Stars & Stripes article that specifically mentioned Hagel’s presence. Once I saw that, I sent out two tweets correcting the mistake. (As for Obama and Vice President Joe Biden, it was true that neither had attended.)

On Sunday, I sent a note to Davis asking why, given the credibility that comes with his military career and law school position, he had distributed information he knew to be false. As he had in his earlier tweet, Davis claimed the falsehood was “sarcasm.” …

Just to summarize the facts in this convoluted affair: Hagel did attend the Greene funeral. Obama and Biden did not. Nixon did not attend the Dillard funeral, and Bush did not attend the Maude funeral. There is no “tradition” of presidential attendance at generals’ funerals that Obama “bucked.” The Hagel misinformation (passed on erroneously by me) came from Drachenberg’s tweet, amplified in the Legal Insurrection post. The Nixon and Bush misinformation was a deliberate falsehood spread by Davis.

Based on Davis’ bio on Twitter (and law school, where he teaches) there was no reason so suspect he was someone who would deliberately spreading false information: 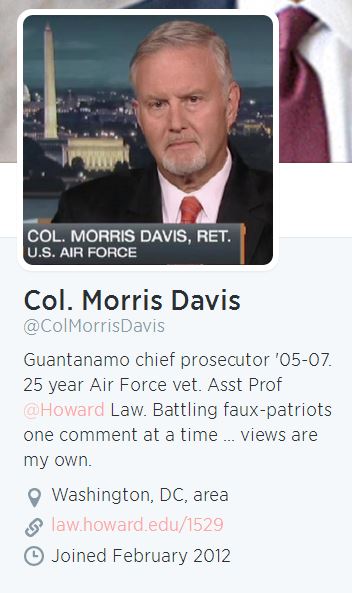 But he did, and bragged about it:

There are several lessons to be drawn from the affair. The first, and most important, is to be skeptical about everything one sees on the Internet and make a good-faith effort to ensure that information one passes on is accurate. I will certainly redouble my efforts on that score in the future. The second lesson is that when one makes a mistake, correct it as quickly as possible, more than once if necessary. And the final lesson, narrower but still important, is: Never trust a word Morris Davis says; it might be “sarcasm.”

The end result is that Obama was playing golf during the funeral, Biden did not attend, Hagel did attend, and a law professor at Howard University successfully pulled off an internet hoax as to prior presidents attending funerals.

I don’t know about Nixon, but Bush did a lot of things that Obama has not.

Obama is merely being consistent: he is showing the general exactly the same level of respect as he has for the troops.

The man difference was that despite errors in major issues, Bush was a good man.
He still bicycles with the vets and has more respect for them that the current occupant of 1600.

Our warriors loved/love President Bush. They knew that he honored them and wanted the best for them. He wanted victory, not some Neutered-Neutral everybody wins zone.

With the world on-fire, the moral midget masquerading as president is sabotaging our armed forces. Breathtaking. Thousands are being given their walking papers. 500-Majors in one recent day. Loathsome. Unforgivable.

The Commander-in-Chief has no respect for anyone he commands.

This is a sad and sorry state we’re all in.

Yep, unlike Neville Chamberlain who was a decent man. Horrendously misguided with all kinds of Gooooood intentions, but a decent human being. With the breathtaking lessons of history there for Obam-Bam to see, he yet chooses to weaken our country in times of great peril. He’s a saboteur, an undercutter and a grifter.

And, to my stunned shock and dismay from which I’ve not fully recovered, America re-elected this Vast Testicular Concavity. Reaping wtf we hath sewn.

Maybe his show of contempt is best.

I know several of the family members of the dead from Benghazi would have preferred never seeing him, given his use of the caskets as props and his lies in their faces.

Perhaps we could ascribe him not being at the general’s service to shame, if it was anyone else.

I don’t think Obama has shame. In any case, I will always carry the image of Obama and H. Clinton dressed in black to meet those caskets from Benghazi and lying through their teeth. But the Sec Def surely should have been there.

Well, I’m not sure Hagel could find the place WITH Siri doing all she could to help him…

he probably did the right thing albeit accidentally.

Per Obama and Kerry, our knuckle-heads of state that willfully do “stupid stuff,” climate change takes precedence over everything including our fallen warriors. This funeral is not as important to him as a “climate disruption” talking point press conference.

“Good for nothing” doesn’t begin to describe Obama and his climate change missionaries.

My thoughts exactly … perfect weather on the Vineyard to get another 18-holes in today … then PAR-TAY like there’s no tomorrow this evening. Why interrupt a great VA-CAY?

Can’t he just do us all (and himself) a favor and resign.

Obama doesn’t have time for that crap. What he wants to know is, “Where did you guys leave my gap wedge?”

Maybe the family suggested no politicians or DoD types show up….

An IRS audit would surely follow in short order.

I’ll bet the family didn’t want the Divider and Chief there! I wouldn’t!

I’m didn’t know MG Greene, but if he’s anything like me he wouldn’t have wanted President Obama there. When I retired from the Army in May I left my letter from him thanking me for my service under my chair. Every other officer in the ceremony did the same. I can’t picture him being at my funeral, and all the aggravation that come with presidential security to boot. My wife and kids don’t need to hear him say “I, me, my” and talk about his “accomplishments”.

My letter was signed by George H.W. Bush and it is framed along with the rest of the documents from that ceremony. If it had been signed by the current CinC (Cretin in Chief) I wouldn’t have touched it, even with white cotton gloves. But I have to give him credit for keeping one of his campaign promises: he has fundamentally transformed the country, mores the pity.

Well Obama hates the military, Biden is a blithering idiot, and Hagel is just an drunk.

Comment by the president…. “Tee for me, death for thee… fore”

This Nation was born from a Commander-in-Chief.

It will die from lack of one.

well… he doesn’t look like he could be his son, so…

Should we expect anything more from the community organizer,’Extraordinaire’?
I hardly think so.

I very much appreciate your observance and photos of the officer’s death. However, it’s no surprise that Obama wasn’t there since he long ago made clear he’s a far left ideologue. Obama can’t be re-elected. I don’t understand why a serious blog such as this wastes valuable time writing about him. The only vehicle that can possibly affect Obama’s actions or help this country is the Republican Party which has made clear it doesn’t want the job. They like the same things he does, massive central government, open borders, taking in 10’s of thousands more homeless Central American kids, but zero Iraqi Yazidi and Christian kids. The GOP has daily access to microphones and refuses to use them. They could’ve used this access to each day demand that we withdraw all Americans from the fake war in Afghanistan that is merely a $6 billion a month transfer of US taxpayer dollars to organized crime along with a few dead bodies.

ONE—Just ONE is all I ask—White House Press Corps Lapdog raises the question:”Is it true, Mr. President, that you were playing golf literally at the time of General Greene’s funeral service?”

Okay, just one little follow-up:”And, Mr.President, with our dangerous world aflame, why are our armed forces being sabotaged, gutted and savagely diminished…By YOU??”

Comfy out here on planet Pluto.