Hamas gets almost nothing but declares victory. 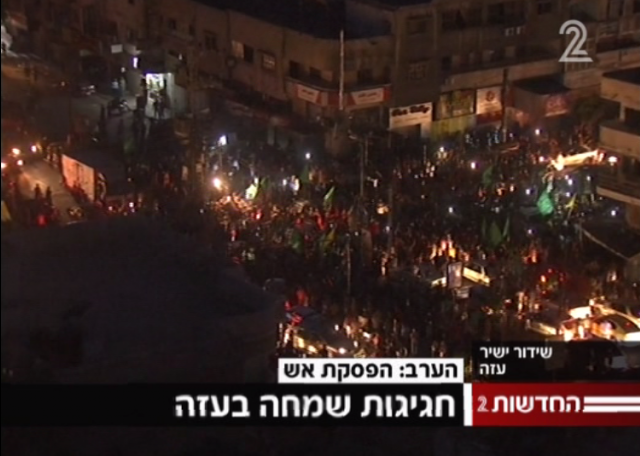 Another Gaza ceasefire has been announced, this time without a time limit.

Army Radio quotes “the most senior and official” Israeli government source confirming that Israel has accepted the Egyptian proposal for an open-ended truce.

The official says the terms do not include any response to Hamas demands, including those for a seaport, airport, prisoner releases, or transfer of funds to pay salaries.

He adds that those issues will be discussed in a month, if the quiet proves itself.

Hamas’s spokesman in Gaza, Sami Abu Zuhri, is hailing victory for several reasons, Army Radio reports — for example, because it imposed what he calls an “air blockade” on Israel, a reference to the suspension by many foreign airlines of flights to Ben Gurion Airport for two days last month.

Israel has agreed to Egyptian proposal for ceasefire that will be unlimited in time.

Needless to say, Hamas is claiming a great victory even though it got almost no concessions in the Egyptian proposal in the streets:

Fireworks and celebratory gunshots are heard in the Gaza Strip as its residents celebrate what Hamas spokesmen have hailed as a resistance “victory” against Israel, Al Jazeera reports.

Gazans out in the dark streets celebrating ceasefire pic.twitter.com/uECTF8rlEq

Seems that truce agreement is blank. Terms to be discussed in a month in Cairo if quiet proves itself #gaza

Ceasefire doesn't include Hamas demands on port, airport, prisoners & funds, Sides will discuss those via Egypt in a month. – @MichaelShuval

If CF holds this time around its a testament to Israel's military pressure and Egypt's diplomatic influence, as Hamas hasn't received much.

What has Hamas accomplished since rejecting that first ceasefire proposal July 15? How many Palestinians has it gotten killed? And for what?

Tweeted out by Hamas, shows how delusional they are:

[Featured Image: Gaza street celebrations after announcement of ceasefire, via The Muqata]

Hamas must have run out of rockets.

Next you will see the requests for concrete in order to rebuild… tunnels.

Anyone taking bets on how long before hamas fires rockets again?

Just prior to the cease-fire, Iron Dome intercepted a fusillade of 15 rockets…pretty much simultaneously.

I’m sure the timing was a mere coincidence.

As far as I am concerned this would be the perfect time for Israel to take a page out of the Hamas playbook and roll the tanks in.

Anyone taking bets on how long before hamas fires rockets again?

However long it takes for them to replenish their arsenal. I give it less than a week. When (not if) that happens, Israel will be denounced for “violating the cease fire” if they retaliate in any way.