It’s not all bad out there. 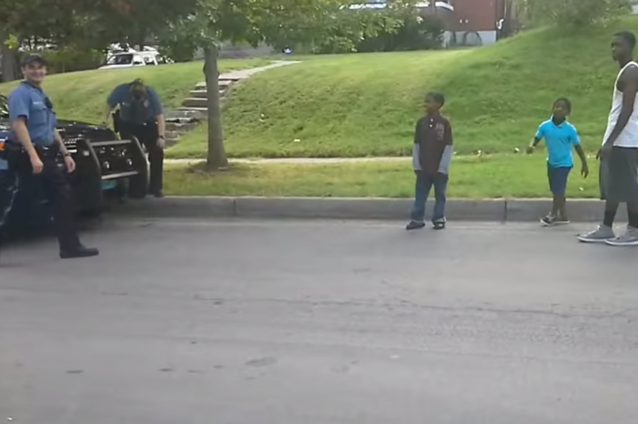 A nice departure from the looting, riot gear, and tanks, this Kansas City cop was caught on camera losing a dance off to neighborhood kids on his beat. This video is making the internet rounds, and rightfully so. Given the over abundance of police brutality headlines these days, it’s good to be reminded that there are good cops out there.

Time has the story:

Out of Kansas City, Missouri, comes a video of a police officer busting a move with some of the local kids in an eastern Kansas City neighborhood. NBC News affiliate KSHB reportsthat after officer Jeffrey Krebs spent Sunday morning dancing in his patrol car, his partner offered Jolly Rancher candy to some kids in the neighborhood if they would throw down their best moves in a dance-off with the officer.

The kids and Krebs delivered, each offering up some moves, including one Krebs dubbed “The Octopus” (which the unseen camera operator reacts to with a quiet “Oof.”)

Krebs told KSHB he hopes the friendly competition will help him work better with the community in the long run: “I feel like if we build rapport with them, then they’re more likely to call us when they need us.”

Funny.
With those moves, he never stood a chance. But nice try.

Now. Kemberlee, THIS is a TANK.

This is a NOT tank.

What I see here is more of the same subtle message: “We are not the same.”
And it is nice to see this good cop trying to reach out, but the problem is in how the media reports it.
I also have an issue with “community leaders” that agitate and promote confrontation instead of peace.

When.are.we.going.to.have.leaders.and.media.that.say:
“We are ONE. We are Americans all of us.”?

But you know what?
That’s just me, so don’t fret. Just go on.

When are we going to have just “Americans” without a hyphen?

Well, we were a lot closer to that prior to The Great Healer’s regime, IMNHO.

I wonder if we will ever see that time, but we can come a lot closer to it again, I think.

We have to somehow find a way to take division as a power base away from those who manipulate it so well. And there really are people on the scene who could help do that, I think.

But just at the moment, we’re looking pretty screwed.

In San Diego, Gay Pride Week is family friendly. In San Francisco, it’s a freak show.
In San Diego, an OWS demonstration is a few people waving cheerfully on a street corner, or a negotiated arrangement downtown that gets dispersed if it gets out of hand. In Oakland, it’s a riot.

If you do not like the way your local government is run, you are capable of changing it.

No, but if you hum a few bars, he’ll try to keep up on the harmonica.

The cop beat those kids hands down on the dance moves. Was he great? No. Did he put some energy and enthusiasm into his effort? Absolutely. Did the kids? Nope. Kids did little more than just stand there.

MouseTheLuckyDog in reply to JackRussellTerrierist. | August 17, 2014 at 5:36 pm

JackRussellTerrierist in reply to MouseTheLuckyDog. | August 18, 2014 at 2:05 am

There’s letting them win when they make an effort with their heart in it, and then there’s rewarding laziness for the sake of blatant ass-kissing. This was the latter.

Ferguson is not a ‘police brutality’ story and ‘we’ don’t need to be reminded there are ‘good cops’ out there, as if Wilson is guilty of the former and is not the latter.

I don’t much care for the posting of this Kaye person; she seems a better fit for Daily Beast perhaps.

Michael Brown put himself where he is and dead mopes don’t bother me a bit.

I couldn’t agree with you more that these staged ‘look things aren’t so bad’ stories in the middle of meyhem are more annoying than anything. I hold the same view regarding the remonstrances people make at such times to remember we are all one.

I will start believing we are all one when our over-lords in the media start treating us thusly. A good start would be to process information according to reliable and evenly applied protocols. If, as a matter of course, your media outlet is generically suspicious of police or perps in stories involving crime and crime scenes, then apply this standard evenly in all cases NOT only when the crime involves allegations of racist conduct and you apply skepticism only to those on the opposite side of the race baiters.

Evenly apply protocols regarding back-story politics. If, as a general rule, you report on political incentives that might encourage political theater then don’t fail to do so when the issue involves black rioting. If Tea Partiers can be examined for astro-turf conduct so can black rioting.

Don’t overly parse reasonable events when the utility of something is obvious. Why, for instance, query the utility of video showing a perp robbing a store before a confrontation with police. The utility is beyond obvious; it illustrates the perp’s state of mind when he encounters the officer.

The sad part of this is that these things happen many times a day in hundreds of cities, but it is not news worthy — aka, will not sell commercial air time. Some people even complain to the brass when they see cops shooting hoops with kids at the park, or just sitting on the car hood and chatting them up. Those same people also complain when some discord between cops and the locals hits the 6 o’clock news. Some people are never happy.

Dana interviewed a “vetted” friend of the Darren Wilson, the cop that did the shooting. she said after the struggle at the car, where the officer was assaulted and hurt and a shot fired, that Brown ran, and the officer pursued and said freeze. Brown stopped and taunted him, then ran back toward the officer … and then the shots were fired, killing Brown.

Now here is a video from the scene, and in the background a guy sounds legit, essentially confirming that Brown turned and ran back at the officer. “next thing I know, I’m thinkin he’s missin’, he starts running coming back toward the police” That critical point is at 7:20, the guy starts talking (in the background) at about 6:30. A little after the 7:20 he again says he kept coming toward him (the cop). He also mentions when Brown starts coming back toward the police, “the police had his gun drawn already” (not that he had fired already).

So that guy just talking to a neighbor not realizing he is taped, confirms the more logical story. More logical than that the officer somehow pulled Brown into his car and then fired his gun in the car (and beat himself up I guess), and that the officer fired while Brown was running away, then executed him while Brown stood there with his hands up.

Another video aired a woman with a handler that claimed she saw that latter story. But when these rehearsed stories are told, with the handler right there nodding and confirming each point, it seems too practiced.

To be fair and “balanced”, this is Tiffany, the far away witness with a lawyer. She (somewhere) says she can’t sleep now, so maybe this lawyer will get her some money from the police for her distress.
https://www.youtube.com/watch?v=8bs2uZN8GAw

Why show this video which by internet time ks ancient?

I bet unlike Chief Metermaid, the cop in the video has never been photographed in uniform flashing gang signs.
http://theconservativetreehouse.files.wordpress.com/2014/08/ron-johnson.jpg?w=640

Or if he ever became a Chief himself, would never have things like this said about him:
http://members.boardhost.com/stlouiscoptalk/msg/1408225093.html

Or have press conferences looking totally defeated, like Chief Metermaid did yesterday.

They want to improve relations with the people? Imprison and fire bad cops, don’t side with them. These days any police department(over 10 officers) that DOESN’T have dashcams probably has a brutality problem.

That’ll sure work to instill confidence in Missouri authorities.

Sorry, Gov. Nixon, you don’t just NOT ride in the front of the bus, you ride UNDER the bus.

He’s splatted against the front bumper, splayed out like Wile E. Coyote after he hit the side of that mesa.

I have heard they have pegged Michael Boden to do the autopsy. You know the same guy that testified that OJ couldn’t have possibly killed Nicole and Ron Goldman.

As for why, I think that’s pretty clear. Despite tissue not being that capable of holding the shape of bullet trajectories. You can determine from the general trajectory whether Browns hands were up or not. I suspect the original autopsy indicated they were down.

I just LOVE the idiots who shape American perceptions…!!!

Rubber bullets… I wonder what they would have thought a condom laying in the street was? A rocket launcher…

A different image of the plugs.
You would think that a reporter would realize that rubber bullets fired are going to be deformed and show signs of being fired.

What? You expect reporters who can’t tell a semiautomatic MSR from an assault rifle, or a rifle from a shotgun, to be able to figure out something as subtle as the difference between rubber riot-control bullets and earplugs? Next you’ll be expecting the media to report that three times as many people are beaten to death with bare fists each year than are killed with rifles of all types*. Or maybe that Diane Feinstein will admit that MSRs are no more lethal than Grampa Fudd’s deer rifle!

I think you’re expecting too much from a media with an agenda.

You just can’t make up this kind of stuff!

I have been laughing my guts out for half an hour!
And then it dawned on me: this are ” the [ignorant] idiots who shape American perceptions.”

Not funny.
Not anymore.

I kinda figure some people thought I was “man-splaining” about the tank thingy to Kemberlee, but I wasn’t.

I would have said the same to David, or Prof. Jacobson or Andrew…well, maybe not to Andrew ’cause he’d shoot me.

But words matter. Things matter. A tank is not an armored car. And while an MRAP is not a Brinks truck, it is a whole lot more like one than a tank.