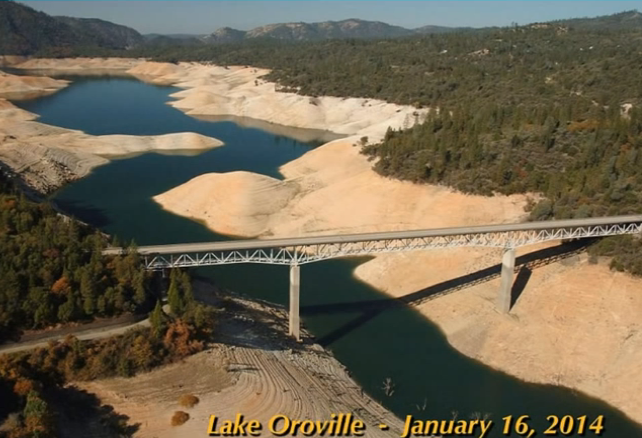 Since late 2013, California has been experiencing one of the largest, most intense droughts in the state’s history. As of August 26, the U.S. Drought Monitor rates the drought in most of California ‘D4 – Exceptional Drought’, the highest rating on its scale. It spread from south-central California, and has since hit even some of California’s usually water rich areas, including Sacramento County.

Water management and the drought have been major talking points across the state for the past year, so logically they have also become huge issues for the coming congressional elections. This is especially true in California’s highly contested 7th District elections, where former Republican Representative Doug Ose challenges Democratic Incumbent Ami Bera.

In the last few months, Ose has begun to focus even more heavily on the district’s water issues, though the drought has been a key part of his campaign since its beginnings: he released a fairly comprehensive water plan in mid-February 2014.

Reform the Endangered Species Act (ESA) to allow greater flexibility in the law so that local communities and farms do not suffer the consequences of a lasting drought.

Waive mandatory mitigation for adverse environmental impacts due to emergency reallocation of water during an emergency drought.

Alternative sources for refuge water: Investing and improving underground wells will help the Bureau of Reclamation to meet water requirements.

Non-permanent crop voluntary fallowing will allow farmers to transfer water to other farmers. This must not adversely affect the farmer’s ability to use water in future years.

The plan also attacks yet another Jerry Brown pipe dream (pun intended) akin to the moribund High Speed Rail: a $25 billion ‘peripheral pipe’ plan to send millions upon billions of gallons of water from northern California down south.

Incumbent Bera lists similar concerns about the drought on his campaign website, though has made few steps to improve water conditions in his district or California as a whole. In fact, Bera recently voted against the Sacramento-San Joaquin Valley Emergency Water Delivery Act, which would direct a large amount of water back into the San Joaquin Valley — water which had originally been diverted to preserve an endangered species of fish native to the area. The primarily Republican-backed bill passed without Bera’s vote.

After making no legislative strides to address the drought, Bera took a lesson from the Obama School of Conflict Resolution and went on a month long vacation, stopping in Wine Country to dine and drink with Nancy Pelosi.

Bera and Ose are scheduled to debate for the first time on Oct 8, in an event hosted by KVIE Capital Public Radio and the Sacramento Bee. Bera has not addressed Ose’s invitations to a series of four other debates.

It would benefit readers of articles like this to note that tree-ring studies going back thousands of years show many long-term droughts in California. Without any man-made CO2 emissions whatever, these dry spells could last for 40 years.

It’s shameful that water authorities and political parties both work to ensure that the public is kept ignorant of these facts.

It’s even more shameful that the leftist/environmental axis is moving heaven and earth to use the current drought as an opportunity to seize more resources from taxpayers and more power over our industrial and agricultural processes for themselves. But then, elect an Obama, and be sure that no crisis will be wasted by failing to seize more taxes and more power for the lefties in government.

The question that pops to this ex-patriot from California is …

Is this earthquake weather?

JackRussellTerrierist in reply to Insufficiently Sensitive. | September 1, 2014 at 1:32 am

I recently moved from CA after living there for 57 years.

The entire problem is the environazis, their lawyers and the judges. They block all attempts at building water retention facilities.

The vote-controlling part of the populace are too naïve and stupid to understand the problem. Farmers and businessmen get it, but that’s where it ends.

*sigh*. This is Cali-freaking-fornia. You can bet that over half of the voters know in their heart of hearts that this is all the Republicans’ fault, that the water they drink does not come from the sky or from rivers; but from the taps when you turn it on. And that it is all a Right Wing Conspiracy that can only be answered by higher taxes and high speed rail.

You can’t help those who are determined not to be helped.

Just ask the residents of Dee-troit, they’ll tell ya’. Clean water when you turn that tap is a HUMAN RIGHT!

In years past, all the good old boys (roughly defined as anyone 18 and up who wears a baseball hat backwards and drives a pickup truck) from the Owens valley used to drive down to the dry, dusty corpse of Owens Lake on Friday night and drink beer and piss in the aqueduct heading to LA.

Maybe they still do. I hope so.