Trapped Yazidis die by the thousands. 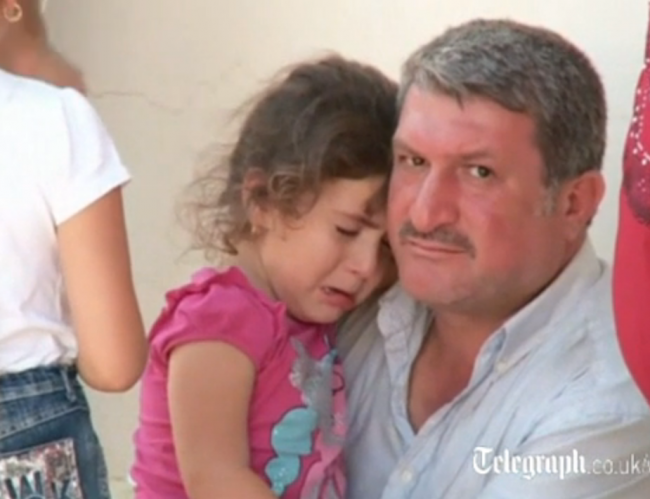 Jonathan Krohn has become to the first western journalist to reach the mountains in Northern Iraq where tens of thousands of Yazidis, a Middle Eastern religious sect, took flight to escape the Islamic State of Iraq and Syria (ISIS) forces that moved into the Kurdish parts of Iraq last week.

Krohn describes the scene of human suffering in stark terms in his first dispatch for The Telegraph.

I was on board an Iraqi Army helicopter, and watched as hundreds of refugees ran towards it to receive one of the few deliveries of aid to make it to the mountain. The helicopter dropped water and food from its open gun bays to them as they waited below. General Ahmed Ithwany, who led the mission, told me: “It is death valley. Up to 70 per cent of them are dead.”

Two American aid flights have also made it to the mountain, where they have dropped off more than 36,000 meals and 7,000 gallons of drinking water to help the refugees, and last night two RAF C-130 transport planes were also on the way.

However, Iraqi officials said that much of the US aid had been “useless” because it was dropped from 15,000 ft without parachutes and exploded on impact.

Perhaps in response to Krohn’s report, late Sunday the U.S. Department of Defense released these two videos showing Iraqi refugees on the ground retrieving the humanitarian aid after being dropped by U.S. forces.

Nevertheless, Krohn reports that the situation on the ground is perilous and the U.S. aid may be too late for the majority of refugees who fled the slaughter by ISIS troops.

Mikey Hassan said he, his two brothers and their families fled up into Mount Sinjar and then managed to escape to the Kurdish city of Dohuk after two days, by shooting their way past the jihadists. Mr Hassan said he and his family went for 17 hours with no food before getting their hands on some bread.

The Yazidis, an ethnically Kurdish community that has kept its religion alive for centuries in the face of persecution, are at particular threat from the Islamists, who regard them as ‘devil worshippers’, and drove them from their homes as the peshmerga fighters withdrew.

There have been repeated stories that the jihadists have seized hundreds of Yazidi women and are holding them in Mosul, either in schools or the prison. These cannot be confirmed, though they are widely believed and several Yazidi refugees said they had been unable to contact Yazidi women relatives who were living behind Islamic State lines.

Kamil Amin, of the Iraqi human rights ministry, said: “We think that the terrorists by now consider them slaves and they have vicious plans for them.”

Tens of thousands of Christians have also been forced to flee in the face of the advancing IS fighters, many cramming the roads east and north to Erbil and Dohuk. On Thursday alone, up to 100,000 Iraqi Christians fled their homes in the Plain of Ninevah around Mosul.

Many Iraqis who have fled ISIS now blame the United States and its coalition partners for abandoning Iraq to the spread of Islamic radicalism that has conquered the region.

Refugees said the American air strikes on IS positions outside Erbil were too little, too late. They said they felt abandoned by everyone – the central government in Baghdad, the Americans and British, who invaded in 2003, and now the Kurds, who had promised to protect them.

“When the Americans withdrew from Iraq they didn’t protect the Christians,” said Jenan Yousef, an Assyrian Catholic who fled Qaraqosh, Iraq’s largest Christian town, in the early hours of Thursday. “The Christians became the scapegoats. Everyone has been killing us.”

They’re full of it. We don’t drop supplies from 15k without parachutes… And our riggers and loadmasters know their craft well enough that the parachutes actually open.

No parachutes? What a stupid thing to claim.

I hope you are correct. Helicopters do not drop with chutes and my fear is that they misjudged their angle of drop. As an old fighter/bomber pilot I can tell you that if you are trying to hit a target on a mountain top and miss high by one inch, the bomb will travel DOWN the entire length of the mountain before it explodes on the ground below. Depending on how tall the mountain is plus the height of the drop you can end up with some pretty big misses.

My thinking, too. Every loadmaster I’ve known was a consummate professional.

humanitarian aid is routinely dropped freefall. LFD (lightweight food delivery) is usually done using the TRIADS system in which cardboard pallets are attached to the overhead cables by static line causing the pallets to break apart in the air as they exit the plane. The food rations are packed in plastic and will flutter to the ground like a leaflet. http://www.loadmasters.com/loader_issues/Loader_15Nov01.pdf

I’m not as familiar with how water drops are being handled currently but it was my understanding circa 2001 that it was normally dropped by parachute in honeycomb cardboard wrapped plastic drums.

I notice that in that video of the helicopter mission, the 20 Iraqi refugees who manage to get aboard are mostly young men. Apparently no ‘women and children first’ rule, there.

First of all, the CIA could have contracted out some of the air drop to some cheeseball U.N. affiliate out of Turkey.

Obama never does anything militarily to be effective. Minimal and feckless; it’s only the talking point that matters. “We delivered aid.”

Secondly, I read the other day that C-17’s out of S. Carolina delivered the aid. Really? REALLY?? Again, if true, feckless.

Lastly, tired of watching F-18’s flown from the carrier in the Mediterranean drop a couple bombs on two guys in a Toyota, and Chuck Hagle says the bombing campaign has been “effective. A million dollars of “defense” to neutralize 34 cents worth of “offense”. Very effective indeed.

Here’s the video of the air drop.

A poster on a previous thread – “I believe it was Kurtis Fechtmayer – said it best. There is no point in rationalizing anything that Obama, Kerry or Hillary may do in terms of acting with the best interests of the US. This indeed, is pointless.
This post by Scott is all you need to know. This man is a Communist; a radical left and Muslim sympathizer, a person dedicated to destroying this country internally by killing its spirit, corrupting its institutions, and stomping on the spirit and hope of its citizens. He has been successful in accomplishing this due to the lack of any credible and sustained political opposition. The opposition, such that it is, is led by men with no imagination or guiding principles, and is frozen with fear and trepidation at the thought of going against a black president.”

This quote form Power Line says it all for me … I’m hoping you guys who know your trade right are correct, but this adm of ob would be cynical or diabolic enough to drop relief to explode.

I can see the spox for the Obama Admin coming out and saying, “We delivered aid, but it’s not our fault that they couldn’t catch what we dropped for them. Once it’s out of the airplane, it’s not our responsibility. The previous Administration chose not to invest in drop-proof crates or proper parachutes – you can take that up with them.”

Both links are eye-openers.

I am calling bullshit on a lot of this . In the Daily Mail I recognised the same old lady in 40% of the photos accompanying different children with various bandages on their heads ( for no obvious injury) . Then there she was laden- ing down some poor donkey Loki g every bit the refugee. It is very similar tactics to the Albanian grannies drama. Also like Kosovo , only the fairest of the children get front feature .

Firstly they are said to be surrounded by ISIS who are at the base . Then we have pics of the Peshmerga bravely aiding their escape on tractors etc . Shock photos of Yazidis being buried alive are those of about 30 walking across a Sandy landscape – nothing is like the titles of articles & sub titles of pics suggest . One pic has a Yazidis girl who escaped up the mountain being carried out wearing pump shoes with Cuban heels!

I admit it is a very good story though – I’m just not buying it .

OK the world is bullsh*t. So tell me why are there a few thousand people on that mountain? Sun tans?

Apparently people need to know what in the hell is going on. So here it is. First – Obama favors ISIS.

But this does not mean that it will always be practicable for him to support them as much as he would like. So from time to time he will have to take a step back and appear to be working against ISIS, helping the victims of ISIS, and even aiding the enemies of ISIS (aka Kurds).

If you think me wrong – just wait.

Remember Lenin – you sometimes have to take two steps back to move forward again.