Possibly overplaying Israel’s hand as to Obama when it comes to Congressional and public support. 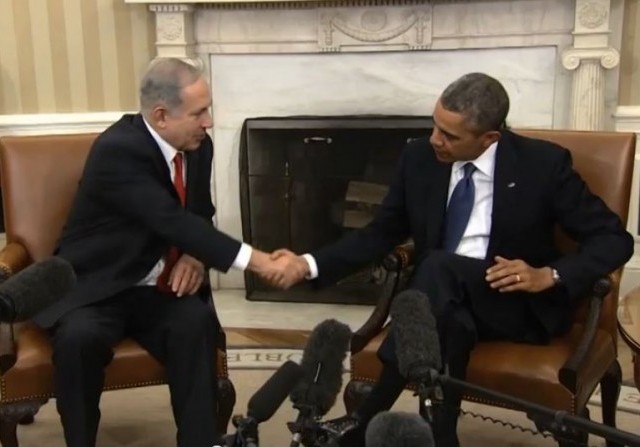 There are more apparent rifts between Israel and the U.S. administration, this time over an interruption of Hellfire missiles at the request of the White House and State Department.

Normal channels apparently were followed, but the administration reportedly has its nose out of joint because the U.S. has been sidelined as Israel and Egypt work together, and Israeli press leaks painted the Obama administration as hopelessly naive and incompetent.

The alleged confrontation has become a hot political issue in Israel, where tension with the U.S. always works against a politician.

White House and State Department officials who were leading U.S. efforts to rein in Israel’s military campaign in the Gaza Strip were caught off guard last month when they learned that the Israeli military had been quietly securing supplies of ammunition from the Pentagon without their approval.

Since then the Obama administration has tightened its control on arms transfers to Israel. But Israeli and U.S. officials say that the adroit bureaucratic maneuvering made it plain how little influence the White House and State Department have with the government of Israeli Prime Minister Benjamin Netanyahu —and that both sides know it….

Then the officials learned that, in addition to asking for tank shells and other munitions, Israel had submitted a request through military-to-military channels for a large number of Hellfire missiles, according to Israeli and American officials.

The Pentagon’s Defense Security Cooperation Agency, or DSCA, was about to release an initial batch of the Hellfires, according to Israeli and congressional officials. It was immediately put on hold by the Pentagon, and top officials at the White House instructed the DSCA, the U.S. military’s European Command and other agencies to consult with policy makers at the White House and the State Department before approving any additional requests.

A senior Obama administration official said the weapons transfers shouldn’t have been a routine “check-the-box approval” process, given the context. The official said the decision to scrutinize future transfers at the highest levels amounted to “the United States saying ‘The buck stops here. Wait a second…It’s not OK anymore.’ “

This paragraph, though, highlights that Bibi may be overplaying his cards:

Now, as Egyptian officials shuttle between representatives of Israel and Hamas seeking a long-term deal to end the fighting, U.S. officials are bystanders instead of in their historic role as mediators. The White House finds itself largely on the outside looking in.

U.S. officials said Mr. Obama had a particularly combative phone call on Wednesday with Mr. Netanyahu, who they say has pushed the administration aside but wants it to provide Israel with security assurances in exchange for signing onto a long-term deal….

While Israeli officials have privately told their U.S. counterparts the poor state of relations isn’t in Israel’s interest long term, they also said they believed Mr. Netanyahu wasn’t too worried about the tensions. The reason is that he can rely on the firmness of Israeli support in Congress, even if he doesn’t have the White House’s full approval for his policies. The prime minister thinks he can simply wait out the current administration, they say.

Bibi is miscalculating. The overwhelming support of the American people for Israel, reflected in Congress, can only go so far.

Congress has no control over military deliveries. Or U.N. votes.

As I have said many times, there is only one person in the world who can destroy Israel, and it’s the President of the United States, who can do so by not acting, by doing nothing, and by not resupplying Israel in time of need.

I’m a lot more invested in Israel’s security than I am in the president’s. But then, I could be the only one.

Obama caves under pressure. I remember the American people getting upset over WH tx of Israel during the Carter admin. They/we’ll rise again and force support if needed. It is a problem that Obama tends to dither for long periods before caving.

I would *LOVE* to do a presidential swap with Israel, if only such a thing could be possible. Reasons?

1. Bibi loves his country.
2. He has experience and conviction to build walls that keep invaders out.
3. He doesn’t lie to his own people. Come to think of it, he doesn’t lie, period.
4. He’s not always on the golf course, or fundraising circuit.

Sigh …. if only it were possible.

The Obama Administrations have consistently proven that they do not play well with others. Should it really come as a surprise to them now that nobody wants to play with them? It isn’t just Israel. The whole world is counting the days until Obama goes home.

But our vain and fickle president supported Christian killing, anti-Israel Morsi, and Egypt had to act against Obama to remove him.

Egypt acted as the mediator in negotiating a truce between Hamas and Israel, and it seemed Kerry/Obama opposed that, and sends relief money to Hamas/Gaza. Of course “relief money” is also fungible to tunnels/missiles, as we have seen. If Team Obama’s real intent is anti-Israel (as it is apparently anti-America) then Bibi’s appeal to congress makes more sense.

Obama sends no military supplies to Ukraine, while whispering to Russia he will be more flexible after the election. And only finally now, under wider political pressure (after genocides and losing the Mosul dam), are some arms making it to the Kurds, our best ally in that theater.

Hoping Obama will in time do the right thing is like the tea party hoping Holder will prosecute Lois Lerner. I don’t know all the intricacies, but it seems the tensions are entirely due to Obama’s disdain for Israel and western culture in general. Congress and other powers in the shadows may not be so loyal to the Muslim Brotherhood as Obama is.

Perhaps Bibi shaming thin skinned King Obama is the wrong approach, or perhaps this gives Queen Hillary (and her lobbyist entourage) a chance to separate herself as the pro-Israel candidate. When Kerry offered Hamas everything and Bibi nothing, perhaps that revealed the true, cast in stone, WH stance, and Bibi feels he must reach out beyond the White House dead end.

I feel conservative constitutional America is in the same position, even though we don’t need weapons … right now. But Obama is fighting on the side of the narco-terrorists, with ICE ordering sheriffs to treat MS-13 illegals as citizens. Obama works against U.S. right up to the edge of impeachment. Hope and trust are long gone.

Great post. Israel needs to employ some more diplomatic savvy. So what if Obama is thin-skinned and has ideological blinkers? Deal with it, he is the leader of the free world whether or not Bibi wishes it was someone else.
The irony of it is that vain egocentric people are very easily manipulated by flattery which is why such folks shouldn’t be in important leadership positions.The Arabs have no problem being obsequious to Obama and Bibi should not either. Loose a little of the personal dignity Bibi, have the Israeli ambassador take Valerie Jarrett out to lunch, and keep Israel safe.

Good point. I am partly extrapolating from my frustration with Israel losing the media war. Israel tells the truth, is a positive influence on the world, and doesn’t hold the world hostage to totalitarian terror. It should be winning the media war, but too often the Israeli spokespeople seem blind-sided at having to deal with all the lies rather than using the time on TV to connect better to the public.

Obama “naive and incompetent”? You mean the guy who went to Cairo early in his reign and announced that now we could all get along because he liked Muslims more than his predecessor and he wouldn’t hurt their feelings? Wasn’t that the most awesome act of statesmanship by an American president ever?

Personally, I blame NASA for failing to raise Islamic self esteem. Another agency that has let Obama down.

What Obama seems to forget is that Bibi is answerable to an electorate that wants to see Hamas destroyed once and for all. Obama thinks that Bibi can just do what he wants by executive order and ignore the electorate.

Israelis are, in general, not politically correct and are very honest and forthright. Many of us like these qualities and think that they are beneficial.

In the upside-down world of international diplomacy, and especially diplomacy in the majority Muslim world of the Middle East, where one has to be very careful about not openly embarrassing one’s opponent, direct and frank honesty doesn’t work. Nobody says the emperor is naked. Everything is euphemistically couched in diplomatic language of “spin”.

Bret Stephens discusses this in a recent talk where he talks about the difference between policy and consequences. For the US, there is room to recover from error. Israel doesn’t have that luxury and Israeli leaders need to be more diplomatic, shouldn’t think aloud and need to think less in terms of tactical maneuvers and more with a view to gaining respect. The talk in its entirety is worth watching, the relevant section is at 1h24min.

The Beastly Day tells me the Obami are insisting all munition transfers to Israel must go though the White House first.

then in some other room, have the real meeting.

In one meeting they will talk about hash tags and humus, while in the other they will address the problem.

This WH is so tone deaf and stupid, they could not tell the difference.

Calling the liars in the White House the leader of the free world is risible. Calling them the most powerful person in the world is equally risible. Calling for Bibi to gain respect in the ME by diplomacy is asking him to build a tunnel from Gaza to his home and fill it with arms and explosives.

When this action commenced, I wrote here of the resupply question. I anticipated Israel’s communications would be severed. Now they are. I am surprised only by the liars’ tardiness in cutting them. Israelis will have to fight more with bodies and hum-int and less with electronics and heavy weapons. Perhaps Saud and Egypt will resupply them. I hope so. Surely they are able. And no doubt IDF has its own quiet logistics tails as well as pre-stocked warehouses. Still, without steady communications, an army collapses into bands of self-organizing (maybe) partisans with unreliable presence and power. Hamas has steady communications.

There are two great truisms of war:

2- a fighting force depends absolutely on its logistics tail, its communications

I guarantee a better quality product will come out of those shops.

By definition, isn’t the President of the United States the leader of the free world? Even if he/she is a liar. It’s the dignity accorded to the office, independent of the person.

Perhaps also Jews in USA will quit being space cadets and vote by reality rather than habit, hope and, from the candidates, pretense. Enough of the lustrations already guys.

Let us hope so.

Are you kidding? Fundamentalist Xtian Teahadist Republicans are the world’s biggest menace. Someone reportedly said the N-word at a Tea Party rally 4 years ago.

Per Prof. Jacobson, Israeli press portrays Obama as naive and incompetent. This erroneous belief is held by some in the US as well. He’s very competent doing what any radical leftist would do given the chance which is to destroy Western civilization. His “competence” is entirely due to the fact that the Republican Party doesn’t exist. As to Bret Stephens, I no longer pay attention to him.