Anti-Semitism and Anti-Zionism — A distinction in theory, but not in practice

Anti-Semitism and Anti-Zionism — A distinction in theory, but not in practice

My guest column at The Hill 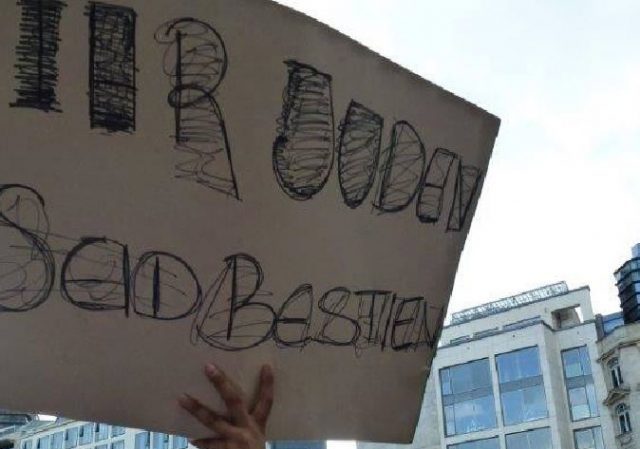 As part of my continuing (but relatively new) effort to gain exposure to new audiences, I have a guest column today at The Hill, Anti-Semitism flares up with Gaza crisis.

How timely given the events just today about attacks on Jewish school children in Sydney.

Here’s an excerpt, head over to The Hill to read the whole thing, and please share with friends via The Hill share buttons:

Certainly, in theory, one can be anti-Zionist but not anti-Semitic.

There are ultra-religious Jews who do not believe in Zionism for religious reasons. And there are some left-wing Jews who side against Israel.

There also are those who truly just want Israel to leave Judea and Samaria (the “West Bank”), although the Israeli departure almost a decade ago from Gaza calls such a strategy into question.

But the exceptions prove the rule. Intellectually one can distinguish anti-Zionism from anti-Semitism. But in the real world, on the streets of Paris, Berlin, London, Boston, Miami and elsewhere, they are one and the same.

Walked right into the lion’s den, didn’t you?

My respect for you just soared another hundred points.

Okay, here’s my problem – the same can be said about Zionism and Racism. Intellectually one can distinguish Zionism from racism. But in the real world, they are one and the same.

There are Zionists who come from every possible racial ethnicity in the world, as far as I know. I am a Scots-Irish Zionist.

Even JEWS are not really A race. They never have been RACIALLY exclusive…just a religious body.

Even the term “anti-Semitism” is kind of stupid, since there are a LOT of non-Jewish Semites, including some of their enemies. Just like you’d expect from a centuries old family feud.

Let’s be honest – if every Palestinian in the West Bank and Gaza converted to Judaism, would Israel give them the right of return, or would they exclude them because of their race?

If you insist that it’s simply religion, do you think Israel would deny a secular American Jew from returning?

In theory, we can talk about Zionism being different than racism, but in reality, it’s implemented on racial lines, not religious ones.

Well, my first impulse is to just observe you are freaking stupid, but…

If everybody in the West Bank or Gaza became a Jew…really, not as a rope-a-dope…Israel would just annex the territories. Duh.

Israel accepts secular Jews from all over the world, every day. Christians are welcome, too. As are Muslims.

How do you identify a “Jew” according to race? Paul Newman? Zero Mostel? Liz Taylor? One of the several Ethopian Jews killed in this latest battle?

I dunno. I may have to revert to “stupid” as my assessment of your comments.

Israel obviously treats Jews differently than Christians and Muslims insofar as right of return. Furthermore, they obviously have a non-religious way of identifying Jews if they accept secular Jews (I’m assuming matriarchal lineage back to an actual believer is necessary, which, ends up being a proxy for race).

Again, one can make an intellectual distinction between Zionism and racism, but in the real world, they are essentially the same.

“Furthermore, they obviously have a non-religious way of identifying Jews if they accept secular Jews (I’m assuming matriarchal lineage back to an actual believer is necessary, which, ends up being a proxy for race).”

“Obviously”…??? WTF are you talking about?

Sammy Davis, Jr. was a convert to Judaism. He was a religious Jew. He had no Jewish lineage.

You ARE an idiot.

Sammy Davis Jr. converted to Judaism, but I’ve got no reference that he became an Israeli citizen or exercised the right of return – if you’ve got a cite, I’d love to read it.

The fact of the matter is this – you’re wrong that Zionism is simply about religion (since secular jews count). While you may believe that mass conversion of Gaza residents to Judaism would be greeted with open arms by Israel, I find that highly doubtful.

In the end, demanding matrilineal ancestry to a believing jew makes Zionism equivalent to racism in practice. You can look towards the Ethiopian jewry that was only officially added to the right of return in 1975 as a historical example of racism (that thankfully, was remediated), but it still works, de facto, as a racial restriction today – as the quoted article said, “the exception proves the rule”.

Yeah, you aren’t just an idiot. You are a liar, too.

I never said “Zionism is simply about religion”.

You never answered how you’d identify a “Jewish” race.

That was your red flag right there, Rags.

“Let’s be honest! Jews are evil racists and their school children need to be confronted on the streets of Sydney and terrorized for it. Let’s be honest! They’re only getting what they deserve. Let’s be honest! If you don’t like my “JEWS ARE BEASTS” sign, you’re a racist Jew sympathizer who deserves to have the windows of your business smashed too.”

Always be wary of the “Let’s be honest! You’re wrong! Can’t we just, as reasonable people, agree about that?!” trope.

You said it, not me, and you were wrong. It’s not just a religious body, since they accept secular jews.

As for how right of return applies to secular jews, my understanding is that it’s matrilineal to a believing jew – which ends up being de facto by race.

Well, here, liar. This should be easy.

Quote the post where I said “Zionism is simply about religion”.

I see your problem (well, you present with a bushel of them, but, keeping it simple…).

You don’t understand words, and you like torturing them according to your misunderstanding.

You CANNOT answer how you would identify a “race” of “Jews” because you know there isn’t such a RACE. So you slide by the issue, after you yourself raised it.

Is there an ETHNICITY we could identify as “Jews”. Well, kinda. Just like there is an ethnicity we identify as Hispanic, while understanding that “Hispanics” can be very different. See, ETHNICITY and RACE are not remotely the same things.

Now, it would be pretty stupid to assert that Israel, the modern state, is even about ETHNICITY, since it manifestly is NOT. Muslims…a quite different ETHNICITY…thrive in Israel in all pursuits.

What we COULD say is that Israel is a PEOPLE, bound by a religious tradition which some of them honor in disbelieving, sharing a belief in democratic forms, and keeping several ethnic identities while making a new one. A little like Americans, in many respects, with at least one important difference; America was not chartered by a world organization to be the gathering place for a people.

Israel certainly is not about a RACE of people, as it has all kinds of people…including other SEMITES…as citizens.

Nor is there any validity to your implication that Gazans are warred against because they are an identifiable RACE, apart from Israelis. We’ve covered that bullshit, and you can Google the FACTS, you moron. Gazans try to kill Israelis (of any race or ETHNICITY) out of hatred. Simple.

I recently read about a young man, who is a Palestinian, a Muslim and a Zionist. That young man is a member of the IDF because he worked it out for himself that Israel is not at fault and that it is Hamas that is to blame.

Israel does a lot for the Palestinians in Gaza. In particular Israel helps with very ill children. The parents of those children constantly show themselves to be less than grateful and fully intend to raise those children not on love but based on their own hatred and biases.

Rags..for all intents and purposes, anti semitism is hostility or discrimination against Jews. If you argue for a broader definition of the word semite, people will think you don’t know what it means today.

I am proudly Jewish and I believe anti Zionism is rooted in hatred towards the Jews. I tried listening to Roger Waters’ explanation for his support of the BDS movement and I came away thinking the guy is a hater who willfully ignores history.

No disrespect to you either because I see how you defend values I hold near and dear to me. So for that, I thank you. I hope there are more of you out there.

If you happen to get on the Kelly File, could you get me a signed glossy of Meghan? I’m sure she’d appreciate your getting it to me.

Irony is these hateful nutcases around the world unwittingly make the case for the need for a strong, secure Israel.

Your ribs are gonna be SOOOO broken…!!!

The good news is the bus attack is less than Prof’s opening point . The bad news if it is totally untrue is there will be a backlash . So sadly , in many ways , some are hoping it is true in part.

I have mentioned before that it is very confusing for outsiders who wish to be fair. It is simply scary to venture into a debate when , judging by the Germanic names , people don’t know if they are dealing with nazis or Jewish . If only Churchill would have addressed this like he did with The enigma of a Russians then we would have something to lean on .

Spare a thought for those trying to make sense of it all .