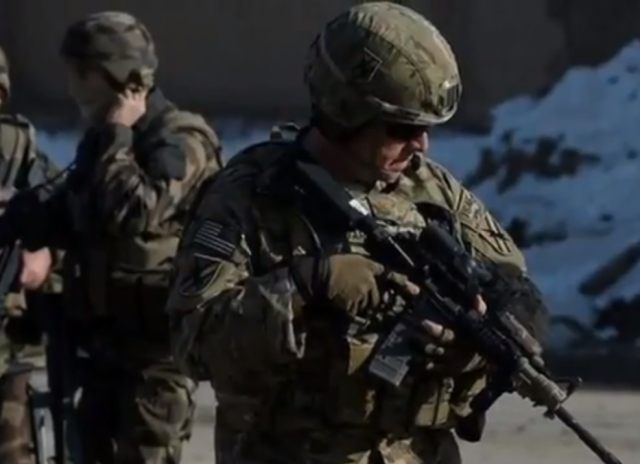 Reports are coming from Afghanistan today about a brutal shooting of American military personnel at an Afghan-NATO training base in Kabul.

A United States Army major general was killed on Tuesday by an Afghan soldier, shot at close range at a military training academy on the outskirts of Kabul, an official of the American-led coalition and Afghan media reported Tuesday. The officer was the highest-ranking member of the American military to die in hostilities in the Afghanistan war.

The coalition official, who spoke on condition of anonymity and would not release the name of the major general, said an unspecified number of other service members of the American-led coalition and Afghan soldiers, including a senior Afghan commander were also shot. Their conditions were not known.

Martha Radditz from ABC News reports the American general killed would be the highest ranking casualty of the entire Afghanistan war.

Other media reports say many more Americans were injured in the “insider attack.”

Details about the attack at Camp Qargha, a base west of the capital, Kabul, weren’t immediately clear. Gen. Mohammmad Zahir Azimi, a spokesman for Afghanistan’s Defense Ministry, said a “terrorist in an army uniform” opened fire on both local and international troops. Azimi said the shooter had been killed and that three Afghan army officers were wounded.

A U.S. official told The Associated Press that one American soldier was killed and “about a dozen” of the wounded were Americans, but declined to comment further. The official spoke on condition of anonymity because the official was not authorized to discuss details of the attack by name on the record.

A senior U.S. military official told Fox News that one of the dead was an ISAF service member and the shooting left a “significant number of wounded, both Americans and Afghans.”

Today’s shooting is the latest in a series of “insider attacks” — incidents in which Afghan security forces turn on their Western military partners. In 2013, there were 16 deaths in 10 separate “insider” attacks. In 2012, such attacks killed 53 coalition troops in 38 separate attacks.

I know its probably nigh on impossible to root out every mole or turncoat but, still, it’s hard to comprehend how they could let the enemy score such a coup. Very depressing.

Its time to just realize that we are not gonna give these savages democracy. We need to pull out guys out, take all of our equipment and support with us, right down to the last bullet, and let these pot bellied savages go back to killing each other just like they have for the past 2000 years.

Then issue a warning that anyone supporting terrorism will be an immediate act of war and we will use a counter balance strategy. The balance will be 1 to 1000, for every american killed by terrorist we will kill 1000 from the country that supported the terrorist.

The surprise is not that it happened but that it didn’t happen sooner or take more victims. The problem is with Islam. Muslims are encouraged to lie to non-Muslims. They pretend to assimilate only to turn later. Not all Muslims, of course, but it only takes a few. And the none radicalized Muslims are not going to rat out the killers. Others have observed that displaced Muslim refugees should only be settled in already Muslim majority countries.

When will we have Muslims killing non-Muslims here in the U.S.? Oh, already has happened. Don’t forget that devout Muslims not only kill non-Muslims but not-devout-enough-Muslims.

For those that say; “you can’t hold a whole country responsible for the action of a few”, I would like to disagree, that is the only way this is ever gonna stop. The only way these countries will stop harboring terrorist is if it becomes to painful to do so. Stop giving them money, stop sending troops to rescue them, stop all support. Then use the strategy I detailed above.

I would bet that within 5 years the number of terrorists attacks would be next to nothing and we would have a great deal more influence in this region of the world.

Drone out 7 warlords for every such attack . That would be the only way to have any effect .

Not likely to happen though .

The Australian press has him as Major General,Harold Green – the highest level American military killed in a war zone since Vietnam.

Haha I down voted myself .

Just to say I checked a lot of US sites & found the reporting ( &naming) to be less than here where it is front page on our guvvie website complete with a nice photo .

Something is very wrong when another nation pays more attention than the US . Is it as if no one cares anymore or just too much going on? .

It saved Obama from having to purge him. (You think I’m kidding?)

It actually saddens me that I realize that you were not kidding immediately.