So why does government feel it has the right to know everything we’re doing? 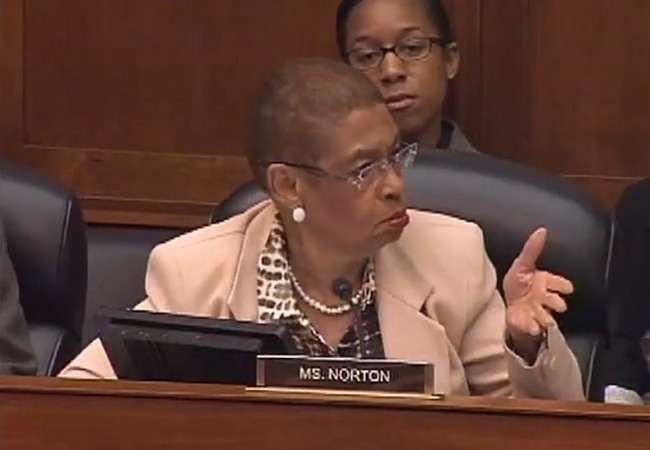 When I first read this report by Sean Higgins of the Washington Examiner, I couldn’t help but notice that Eleanor Holmes Norton represents the District of Columbia:

Eleanor Holmes Norton, the non-voting congressional delegate for the District of Columbia, angrily sputtered during a congressional hearing Friday that the White House should not be held up to scrutiny, saying that there was no right to know what it was doing behind closed doors.

It was, to put mildly, a significant departure from the more traditional liberal stance that openness and transparency are must to prevent abuses of power by government officials. Instead the leading advocate for statehood for the District of Columbia literally argued that even the congressional committee charged with oversight shouldn’t be asking questions in the first place.

Here’s the video. Hat tip to Soopermexican of The Right Scoop.

What a telling moment. Under Bush, liberals claimed dissent was the highest form of patriotism.

In the age of Obama their message is loud and clear: Stop asking questions.

This lady has no clue what separation of powers is all about. And naturally, she doesn’t understand parliamentary government either.
And yet, there she is holding office.

A true reflection of her “constituents.”

Do you think even for a nanosecond that any of her “constituents” has ever given a thought to the idea that a constitution was written to limit the government?

She’s probably as dumb as some of her friends in the CBC … the guy who talked about Guam tipping over, Lee talking about the manned landing on Mars, etc. Birds of a feather, you know.

I think someone needs to donate a couple of wigs to that poor lady. Maybe Maxine Waters or Sheila Jackson Lee could share.

I hate to say it but it is color my friend. That’s all it is. If obama was white she would not have mentioned this issue. When 98% of ANY group vote en masse for a candidate it is much more than ideology. Blacks have circled the wagons for this president and I truly believe they would allow him to become a total dictator if given the option. I am sorry that I feel this way but after many many hours of reading and watching the responses of black politicians and activists I have come to this conclusion. It is very similar to the OJ trial where jury nullification took place and we all knew that justice had been sacrificed for racial payback. The prosecution could have had a video of OJ killing those two people and it would not have mattered.

To a great extent this is true, but the same overwhelming, lockstep, unquestioning support doesn’t apply to black conservatives in politics. It’s weird how race is such a controlling factor in some cases but inconsequential in others. If you criticize a black Democrat, it can only be a result of racism and it must be stopped; if you criticize a black conservative, he or she is not authentically black anyway, so go ahead and pile on.

Most CBC members have been elected from majority/minority gerrymandered districts. This is nothing less than affirmative action applied to elections.

It certainly calls for re-examining the theories of the late Professor Shockley of Stanford, one of the three inventors of the transistor at Bell Labs.

That isn’t what she said, and what she did say is at least partially correct.

It has always been true that some functions of each of the branches of government were held to be unique to those branches, and could not be invaded by the other branches except on the most extreme showing of a “need to know”.

The Supremes do no permit Congress or the Executive to drill them for information on their deliberations.

Congress would rightly refuse a demand by the President to know how their inquiry into an ethics violation is being conducted, and an individual Congressman would refuse many kinds of inquiry into his/her position on issues.

There are areas of the Executive’s activity that are generally off-limits to the other branches, and rightly so.

This seems factually correct as far as it goes. But the point of the piece is that Democrats’ understanding of transparency obligations change quite a bit from a Republican to a Democrat presidency. In the extract above, the point is asserted rather than demonstrated, but it’s quite plausible from what I recall of how Democrats treated Bush.

I suspect that Norton is much more concerned about protecting a black Democrat president than she is about upholding the constitutional separation of powers. If she cared about the latter, she’d be outraged at Obama’s usurping of legislative power. As it stands, I haven’t seen any Democrat express concern about that, unless you count Jonathan Turley.

Dude! You are asking for CONSISTENCY from a Collectivist…?!?!?!

They don’t DO that. But the point here is that…

1. she did not say what was quoted, and

2. she did not MEAN what was stated in EITHER piece we have.

Whatever ELSE is true about this Collectivist, she was making a facially TRUE comment, and she would have made it in defense of ANY color of Deemocrat President.

We NEVER need to stoop to misquoting people or intentionally misconstruing what they say.

“Democrats’ understanding of transparency obligations change quite a bit from a Republican to a Democrat presidency.”

With which I would agree, with the caveat that SOME of us exhibit the same propensity.

But THAT was NOT what Aleister said. First, he misquoted Norton. Second, he misstated what she actually DID say. So did Higgins in the root piece.

As to SOME of us playing the race card here, that is just intellectually lazy. Norton would raise the same points in defense of Clinton (either) or Gore. Her ideology is FAR superior to her racial allegiance, as anyone knows who has ever seen her attack a conservative person of color.

I thought government was something we did voluntarily. At least that’s what some wag from the administration said is the case.

Well, I don’t choose to voluntarily be part of a government that does things in secret and then keeps that information from me. It’s not what I signed up for.

Of course you chose…as do we all…to support a government that “does things in secret and then keeps that information” from us!

Furthermore, we want our governmentSSSSS to NOT tell us every damn thing, since that kind of information would often be detrimental to individuals and to the public at large. That isn’t even “keeping a secret”. It is just being careful with information.

Now, where we do agree…without the hyperventilating going on here…is that THIS regime has been historically secretive OFTEN IN VIOLATION OF LAWS to the contrary. See accounts, email.

Ragspierre; I just want to say I appreciate your ongoing comments on this blog. You sometimes point out inaccuracies or omissions in either the articles or comments that we need to be aware of. You did this in McCain’s response to the freeing of some of the terrorists, and that gave a much fuller picture. So thanks for adding a voice to the conversation.

Just trying to keep up my voter registration in Realville.

Since this woman is a government employee, we have the right to know everything she does, who she gets bribes and kickbacks from, where she travels to, etc. Nothing in her life should be private. She works for the taxpayers.

1. elected members of Congress are not “government employees”

2. have you ever HAD an employee?

3. for how long after you told them “nothing in your life is private”?

4. would you work under the conditions you name?

5. she was not referring to herself

6. she was not referring to a general “right to know stuff” the public has.

Ignorance and Arrogance are a really bad combination of traits in an individual.

This woman is as ignorant as she looks. Worse, she’s running our government.

Sooner or later, we’ll become enslaved to the likes of this poster-girl for Michelle Obama beauty tips.