While you were focused elsewhere, Ukraine-Russia confrontation just heated up

While you were focused elsewhere, Ukraine-Russia confrontation just heated up

On the brink of civil war, confrontation with Russia 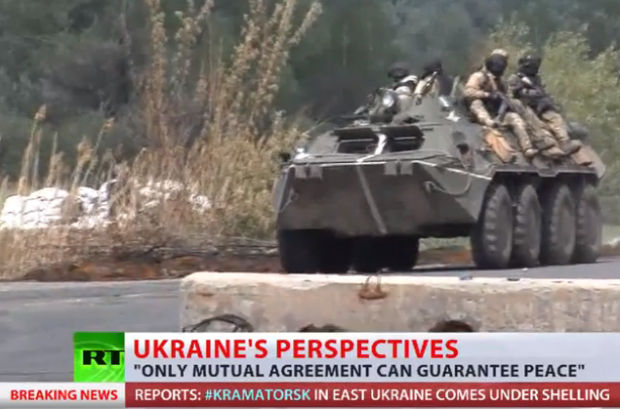 This seems like a broken record, but the last 24 hours have turned the standoff in Eastern Ukraine from a “ceasefire” to a hot war that doesn’t appear to be cooling down soon.

On Friday, June 20, Ukraine President Petro Poroshenko announced a unilateral one-week cease-fire by his government as a way to deescalate the crisis with pro-Russian rebels in Eastern Ukraine. Poroshenko announced to ceasefire with an ultimatum for the rebels: disarm or leave Ukraine.

Poroshenko called the 7-day cease-fire, which was to begin later on Friday, a first-step in a larger agreement, not only giving separatists a chance to disarm, but also for pro-Russia rebels to leave the country, the Kiev Post reports.

He called on separatists to lay down their weapons, or else be “destroyed,” the President said.

“The forces of the anti-terrorist operation will halt military action starting today and through June 27,” Poroshenko was cited as saying by the Interior Ministry on its website.

Probably to no one’s surprise, the ceasefire was violated several times in the last 10 days mainly by the pro-Russian forces.

So as July dawned in Ukraine, the ceasefire was over and heavy fighting broke out in the separatist eastern regions.

The speaker of Ukraine’s parliament, Oleksandr Turchynov, told lawmakers the government’s “anti-terror operation” against pro-Russia separatists had been “renewed.”

The announcement came hours after Ukrainian President Petro Poroshenko said that his country would not renew a cease-fire with the separatists, vowing instead to “attack and liberate our land.”

“Termination of cease-fire is our response to terrorists, insurgents, marauders … and (those who) deprive people of normal peaceful life,” Poroshenko said.

U.S. and NATO officials were quick to blame Russia and Vladimir Putin for not taking advantage of the ceasefire to de-escalate the crisis.

Reports began to trickle in via Twitter early Tuesday morning that Ukraine forces had renewed their efforts to defeat the pro-Russian rebels.

Tank battles in Europe are no longer a WW2 relic. They're reportedly happening now near #Donetsk #Ukraine http://t.co/tJVP5zmlUV

Also on Tuesday, Russian President Vladimir Putin commented on the latest developments in Ukraine but didn’t hint that the fighting would end anytime soon.

Putin did suggest, however, that he believes he has wide latitude to protect Russian people — including in all parts of the world, apparently.

Putin expands definition of a Russian person to anybody "the wider Russian world," anybody who "feels that they are Russian."

While the United States has been mostly focused on the advance of the Islamic army ISIS in Iraq, Ukraine has flared up and again presents a challenge to the West on how to deal with a resurgent and unrelenting Russia knocking on its doorstep.

I don’t think it’s heating up; to the contrary, the battle lines are more or less stable, albeit slowly moving west. The “heavy overnight shelling” is business as usual in eastern Donbas these days, and the cities there are deserted.
What’s to watch in Ukraine right now is the economy. The austerity measures that are coming into effect in connection with the EU association agreement. Additionally, Russia, their major export customer, is raising the tariffs (Russians think it’s a good thing for their country, apparently).

Who/What is this “West” that is challenged? The term is militarily, morally and politically vacuous. It has no referent. There are nations in Europe and the Americas, as elsewhere. But there is no “West.” The term is sociologists’, not real. A pretense of learning, not a surfeit of same. It has no specificity on anything tangible. The criminal organization occupying the White House has no use for it. Neither has any actual actor.

Now, if one denotes whatever it is one wishes to denote by this essay as Latinate civilization or Pax Laticana or something along those lines — heavy on the Latin/Church — then there is substance being denoted. Otherwise, fog of confusion … or worse, positive propaganda. In Ukraine, Latinate civilization meets Russian Orthodox civilization … again. The truth is, it’s time they quit putzing about and joined forces, within India, against the big enemy on the globe at this time: China.

So who is this Laura Mills ? Is anyone on Twitter an expert ? This has gotten ridiculous.

What a farce. The US engineers a coup d’etat to remove the only democratically elected government in Ukraine’s history, installs an openly fascist junta and pretends surprise when large numbers of Ukrainians protest.

The problem is that the Ukraine is an artificial country (like many others) and there are very deep divisions among its residents (I won’t say citizens.) Yanukovych won by majorities of over 60% to over 90% in the east, and lost by equally lop-sided majorities in the west. So, it is hardly sup rising that the easterners would reject the junta. And note that they were not allowed to vote for a candidate of their choice in the recent fraudulent pseudo election.

The only rational solution to this crisis is partition, and the only question is where to draw the boundary.

The utter criminality of the US and EU regimes is fully on display in the Ukraine, north Africa and Syria and Iraq. Our criminal Ruling Class will continue to foment chaos and violence in the world until some external power puts a stop to it. Too bad Russia is too weak to do it.

Ukraine had a revolution because it’s a failed state, and, clearly, it started spontaneously. It was probably funded by the oligarchs, although it’s anyone’s guess.