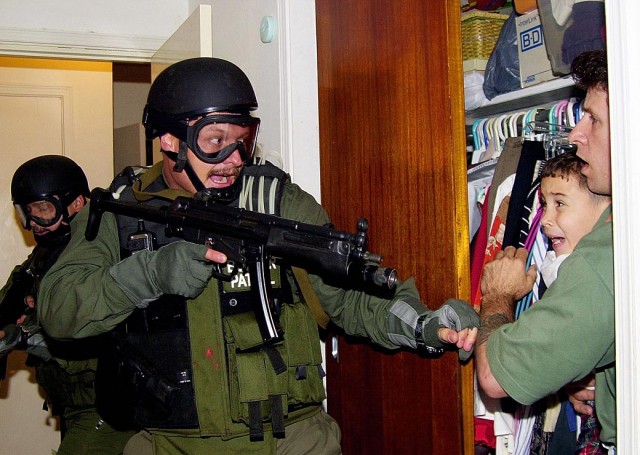 Those of us of a certain age remember the days-long stand off in Miami involving a Cuban refugee child fled Cuba with his mother to escape to freedom to the United States.

Elian Gonzalez was found by a fisherman off the coast of Florida in November of 1999; his mother and other Cuban refugees had drowned during the trip, but Elian survived. Elian was only six years old and his mother had given her life to ensure he made it to the United States. Relatives in the Cuban community of Miami took him in, but the case became complicated. Elian’s father, who was separated from his mom before their journey, demanded that the boy be returned to Cuba.

Elian’s great uncle in Miami gained temporary custody, but the US government ruled the boy must return to his father in Cuba. The drama culminated in a dawn military-style raid on April 22, 2000 by the Clinton Administration’s Immigration and Nationalization Service. In one of the most famous photos of my lifetime, an armed INS agent is shown snatching terrified Elian being from his great uncle at the point of an automatic weapon.

Americans were astounded at the events as they unfolded. Many wondered how the U.S. government could ignore the wishes of Elian’s mother who had died trying to bring him to freedom. The answer came from none other than Eric Holder.

It was then-Deputy Attorney General Holder who invented the “legal” cover for federal agents to forcibly enter the home of Elian Gonzalez’s legal custodians, American citizens all, so he could be returned to the warm embrace of Castro in communist Cuba.

The 11th Circuit Court of Appeals had ruled that once the INS chose a guardian, the guardianship could not be changed. On Dec, 1, 1999, the INS asserted that Miami-based uncle Lazaro Gonzalez was now Elian’s legal custodian. Holder then decided on his own that the court ruling and the INS determination were both invalid and that Elian would be returned to his father in Cuba.

Holder even seemed to deny reality in this exchange in 2000 with FOX News judicial analyst Andrew Napolitano.

Napolitano: Tell me, Mr. Holder, why did you not get a court order authorizing you to go in and get the boy?

Holder: Because we didn’t need a court order. INS can do this on its own.

Napolitano: You know that a court order would have given you the cloak of respectability to have seized the boy.

Holder: We didn’t need an order.

Napolitano: Then why did you ask the 11th Circuit Court of Appeals for such an order if you didn’t need one?

Napolitano: The fact is, for the first time in history you have taken a child from his residence at gunpoint to enforce your custody position, even though you did not have an order authorizing it.

Eventually, the Miami family lost all appeals and the Supreme Court paved the way for Gonzalez to return to Cuba where he has become a useful propaganda tool for the Communist Cuban government.

So fast-forward to today. Eric Holder is our Attorney General and central to deciding how to manage tens of thousands of unaccompanied minors illegally entering the southern United States border. And wow, what a difference 15 years makes for Mr. Holder.

Eric Holder made a very emotional plea the other day when he announced the Obama administration program “Justice AmeriCorps,” intended to provide emergency legal representation to the tens of thousands of unaccompanied minors flooding across our open southern border from Central America.

“How we treat those in need, particularly young people who must appear in immigration proceedings, many of whom are fleeing violence, persecution, abuse or trafficking — goes to the core of who we are as a nation,” the attorney general said, explaining a program to provide 100 lawyers and paralegals for minors brought here by drug cartels and other human traffickers.

Eric Holder established the precedent of “parental rights” trumping immigration law and refugee status in the Elian Gonzalez case. If Holder was consistent, he wouldn’t be ’emotionally’ complaining about lack of legal rights for the children at the border — he’d be arguing that the parents in Central America still have parental rights.

If Holder were to be consistent with his own standards, he’d explain why it was the United States government responsibility to act as parents — when he argued the opposite in the Elian Gonzalez case.

This is all about politics for Holder and President Obama — if it wasn’t we wouldn’t be in the mess on the border at all.

“Napolitano: You (Holder) know that a court order would have given you the cloak of respectability to have seized the boy.”

I didn’t know they MADE cloaks big enough for that.

If Holder were to be consistent with his own standards

He is consistent. He sides with the Communists against the Americans.

He does not share your expectation that he abide by American norms; he is laughing at you.

Thanks for reminding us about Holder’s despicable history.

he was in the waco stuff too wasn’t he?
or was it ruby ridge?

America is a signatory to the international agreement to repatriate disputed children or are they not ?

In any case , we have an American woman being extradited to the US after kidnapping her daughter 21 years ago on an access visit .

The key difference is ‘disputed ‘ . It is unlikely anyone in these godforsaken places wants any of the 52,000 back .

I get your point. Holder is a pig.

And nobody believes that he cares about anyone’s welfare or wellbeing other than his own.

Legally, of course, the difference is that in the instant case the parents either are in the U.S. or sending their children to the U.S.

The man holding Elian in the picture is Donato Dalrymple who was one of the two men who rescued him from the ocean.

Elian’s case made international news. I remember when this story broke and I remember that picture when it all took place.

Holder is the worst of the hypocrites. Impeach Eric Holder.

I expect he would do exactly what he did, send the kid back to Castro.

Remember, he only grants asylum to people who aren’t running from something.

Bruce,
Can you post the cover art of John Ross’s book Unintended Consequences. Reminds of the Elian Gonzales photo

I think the point of this article is that Eric Holder is a hypocrite, but sending Elian Gonzalez back to Cuba was the right thing to do.
The same should be done with these 60,000 children that have crossed the border, not use them as an excuse for demanding $4,000,000,000.00 more from the taxpayer.

Elian Gonzalez’s dad was (is) a piece of shit, but I don’t think our courts or our government should have the right to strip people of their parental rights because of their political affiliation.
That’s what communists do.
This ain’t no communist country.
Oh! Wait…

I am surprised you knew/ know the father. Did you sneak over there – bad boy.

I was still living in Cuba when it all happened.

And no, I have never met that guy in person. I know what he did, and that’s why I call him a POS.

Well, he was a subordinate back then, and he was only following orders.