Video: Israeli troops on break from fighting sing “The nation of Israel will never give up”

Video: Israeli troops on break from fighting sing “The nation of Israel will never give up” 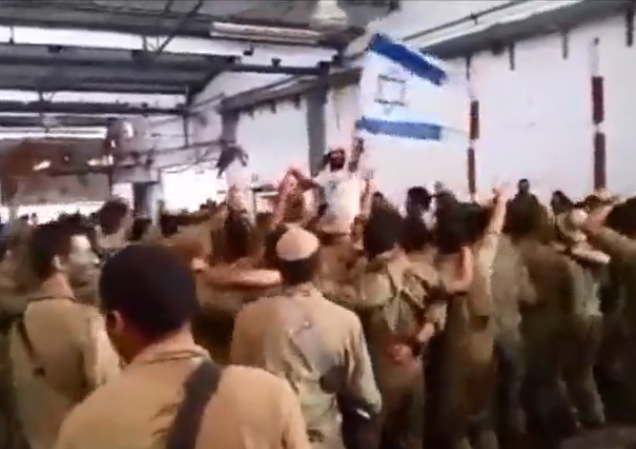 Part of the anti-Israel war effort includes attempts to demoralize Israel and its supporters. That is why Hamas, Hezbollah and others try so hard to kidnap Israeli civilians or soldiers, and even to grab dead bodies.

That psychological warfare is on full display in the media and social media. But it’s not working because Israelis know that Hamas and other Islamic terrorist groups in Gaza, who fire from among civilians towards civilians, leave Israel with no choice but to fight in a war it didn’t want but in which so much is at stake.

Despite losses from infiltrators and in city combat, Israeli troop morale is high from all reports.

The video below has gone viral on Facebook, with over 30,500 likes and almost 20,000 shares as of this writing.

It shows Israeli soldiers on a break from combat in Gaza singing:

The song is “Who Believes” by Eyal Golan. This is a rough translation (thanks to our Israeli family friend Daniel for the link):

THE ONE WHO BELIEVES

Every place, all the time
The old and young has
Beautiful and less beautiful days
Among them answers to all the questions

I stand with Israel and am proud to be a Jew.

Well, THAT is just a crying shame. Good grief. I never thought I’d see such a disgraceful development.

Great article, thanks for the link.

This recent talk from Eugene Kontorovich is also very interesting with new ideas on how Israel should conduct diplomacy talks with the Palestinian and Arab leadership.

The start of the video has the end of a classic Israeli tune to the words:
Kol ha-olam kulo gesher tzar m’od v’ha-ikkar lo l’faheid k’lal

Which essentially means: “All the world is like a narrow bridge and the essential principle (challenge) is to go forward and cross the bridge free from fear”.

Words from Rav Nachman of Breslov.

Or, “the whole world is a very strange carrot, but the farmer is not afraid at all”.

Given that it is basically a song of faith in god, why does the article title make it sound secular?

Of the seven fallen soldiers whose names were released yesterday, two were Americans and one an Ethiopian. I just came back from the funeral of the Texan; we could not get in, the military cemetery was so packed. 20,000 people. This in spite of the funeral being postponed from 9PM to 11PM and being the second one today.

PS – Thank you for posting this. The shouted out word in the middle of the song is “ASHREINU!” – fortunate are we; a word from a prayer originally composed at a time when Jews had to hide their faith.