Advocating armed resistance as the only path forward. 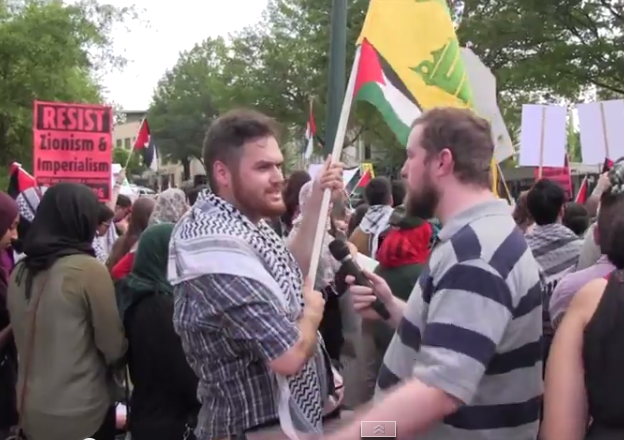 We highlighted earlier this week The threatening face of anti-Israel boycotters in America.

The Capitol City Project attended an anti-Israeli protest in Washington D.C. today, and had a nice chat with an anti-Israel protester carrying a Hezbollah flag:

A man carrying the flag of the terrorist group Hezbollah gathered with other protesters outside of the Israeli embassy this afternoon to display their disapproval of Israel’s latest conflict with Hamas.

When the Capitol City Project asked why he was carrying the flag the protester responded that “in 2006 Hezbollah did something which no other resistance group was able to do against Israel. And that was defeat an Israeli zionist army”. “At this point the only Israel, unfortunately, is able to understand is armed resistance,” he continued.

“I don’t have a Hamas flag but I would’ve been waving a Hamas flag, Islamic Jihad flag” the man said. “Because these are people that, just like the IRA before them, just like the Russians against the Nazis, just like the Americans here in this country, it was armed resistance that gave them their freedom,” he contended.

He said that armed resistance is “just one aspect of achieving the freedom.” “BDS is also something that will be able to achieve that” the activist claimed.

I always feel like people who feel the need to do things like this are total failures in their social lives. It’s the white knight syndrome. Utterly powerless in his local culture so clings to a subculture he can feel important in. Getting attention from shock value is a plus.

Talk about the polar opposite of Mr Hezbollah flag. Bravo.

Thanks for posting this link, what a terrific young gentleman!

Logically it is equally inappropriate to fly any flag in the US bar indigent & historical flags .

The only “imperialism” in the ME is that of the Islamists.
ISIS is trying to create a Caliphate, If they succeed I’m sure the “Palestinians” will get what they deserve.

Time to start exporting some of these flag waving protestors.

The time has come where there is no longer a luxury to indulge these idiots: they’re killing people, and helping pave the road to the next world war.

“A man carrying the flag of the terrorist group Hezbollah gathered with other protesters outside of the Israeli embassy this afternoon to display their disapproval of Israel’s latest conflict with Hamas.”

Aren’t these two groups fighting each other in Syria? It’s hard to keep up with all the splinter groups over there.

Never the less, the simple question one might ask is, “Who fired the first shot?” Another might be, “Which group including the Israelis directs their activity at civilian populations?

The answers are obvious and if I were Bibi, my decision might be to invade Gaza, scrape it clean and relocate the survivors to a walled pen in the West Bank followed by redevelopment of the former Gaza to that of a tourist mecca, large naval facility and industrial zone.

On 9/12/01, who would have thought anyone would wave an Islamist terrorist flag so brazenly in the USA?

What next, the ISIS-Al Queda black flag?

Those are enemy flags and should be seized, spat upon, stomped and burned.

Thank you, President Outreach to Islam