Using old school typewriters will not protect you from snooping

Using old school typewriters will not protect you from snooping

If the spies really want to get you. Just ask former KGB operative Vladimir Putin. 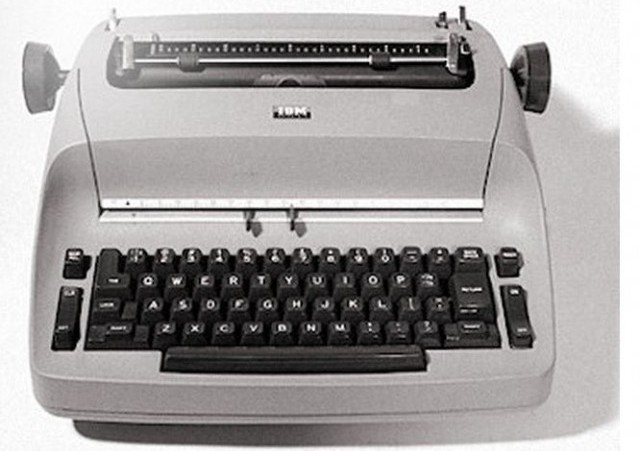 How expansive is electronic espionage?

Israeli Prime Minister Benjamin Netanyahu reportedly does not have a computer in his office, does not use email and does not have a private phone. I read a while ago that he even uses hand signals in some situations, although I can’t find the link now.

There’s every reason to believe many major national intelligence agencies have similar capabilities, they just don’t have Edward Snowdens willing or able to walk off with the proof. You know, imprisoned or dead families could be the consequence elsewhere.

So frustrated with U.S. snooping is Germany that it is considering going to old school typewriters, via The Guardian, Germany ‘may revert to typewriters’ to counter hi-tech espionage:

German politicians are considering a return to using manual typewriters for sensitive documents in the wake of the US surveillance scandal.

The head of the Bundestag’s parliamentary inquiry into NSA activity in Germany said in an interview with the Morgenmagazin TV programme that he and his colleagues were seriously thinking of ditching email completely.

Asked “Are you considering typewriters” by the interviewer on Monday night, the Christian Democrat politican Patrick Sensburg said: “As a matter of fact, we have – and not electronic models either”. “Really?”, the surprised interviewer checked. “Yes, no joke”, Sensburg responded.

While typewriters might be harder to spy on, they hardly are foolproof, as the U.S. Embassy in Moscow discovered back in the day (1986): 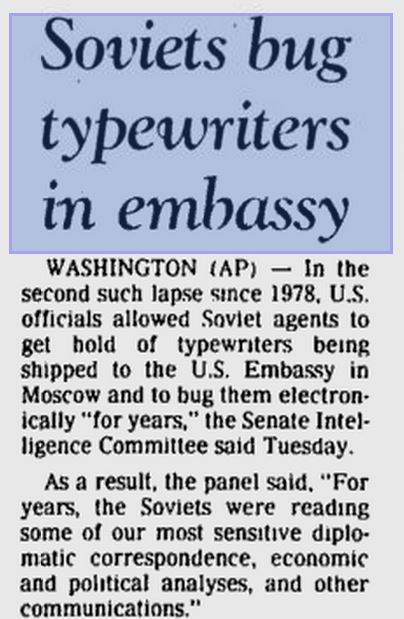 More on the typewriter espionage here:

… beginning in 1976, the KGB successfully installed sophisticated miniaturized electronic eavesdropping equipment and burst transmitters inside 16 IBM Selectric typewriters used by the staffs of the Moscow embassy and Leningrad consulate, which copied everything being typed on the machines, then periodically broadcast their take to KGB engineers manning listening posts just outside….

In the end, NSA concluded that the Soviets eavesdropping operation had most likely compromised every document typed on these 16 electric typewriters over the span of eight years from 1976 to 1984, but NSA and the FBI were not able to provide a more refined and detailed damage assessment because it had gone on for such a long time and because key documents about who in Moscow and Leningrad had used the typewriters had been destroyed by the State Department.

How did it go undetected for so long?

The spy devices were powered either by battery or directly from the mains supply which powered the electric typewriter itself. Once every 82 seconds the devices would transmit 400 microsecond radio bursts of eight encrypted keystrokes. In this way a record of what was being typed in the Embassy was passed directly to the Kremlin.

The Soviets cleverly included a remote on/off switching facility to turn off the data bursts if they felt that security had been stepped up and there was a danger the Americans might detect the devices.

So while using old school typewriters might afford some protection, it’s hardly foolproof.

The KGB was expert at bugging typewriters. Now a former KGB agent is the President of Russia. Yeah, switching to typewriters should work, just fine.

In my Army days, we used to cut up our Selectric ribbons.

Which always struck me as silly. If I were really dedicated, I could have reassembled the ribbons just fine. Like shredding, unless you remove at least half of the shredded material, a motivated somebody can put it all together again.

Didn’t selectrics use film ribbons? Where the film was used once then thrown away? Like those used an the Smith Corona Cartridge Typewriters?

I would have thought that security would demand use of ink imbedded ribbons where the cloth would be usedd many times with literally dowens of characters being stuck over. Almost impossible to read.

Yes. Mostly. You could get conventional ribbons for Selectrics, but the film ribbons were used by the Army, hence they were cut up. Otherwise, you could just read the stinking film.

Difficult, but the last layer was readable, sometimes.

The films were just begging for a security breach. Better if they were burned and pounded, before installation.

I ran the Incinerator for a while on a Cruiser. The Radio gang would bring up burn bags of message traffic and they also had typewriter ribbons with the papers. This was late 70s, early 80s.

I don’t know if the Krauts use Tempest-level physical security, but they’ve been exposed to it for decades, and that will discourage low-tech evesdropping on low-tech equipement.

Lets just see the NSA try to eavesdrop on a pencil writing a message on paper. 😉

My 1973 Adler manual typewriter and 1970 Olympia electric work just fine. I wonder if Ze Germans would like to buy ’em back.

Also, typewriter keys or balls are like snowflakes…no two are exactly alike, which means that a document can be traced back to a particular machine. Try that with a printer.

Most laster printers have micro printing, serial numbers hidden in the letters. Not sure about inkjets, but most lasers since the early color LJ have had to so that the treasury could trace back counterfitting.

How quickly everyone forgets!

Only I know how to code & decode – with my Little Orphan Annie Decoder Ring.

Vlad the Bad, the KGB and the Chinese cannot break my codes. The decoded messages are safely locked inside my head waiting for voices to tell me their meaning.

I’ll let you have a ring IF you bring me a shrub.

In the 1970’s I served as communications center OIC for an army base in Germany. The CC served a major US Army (not NATO) command. I could not get funds to renovate the CC for Tempest. So I asked for an got a security audit from the ELINT assessment team in Augsburg. In short order they demonstrated the ability to copy electronic signals from the teletype in the clear using the chain link fence around the facility at an antenna. Did I get the renovation money then? No, I got transferred.

Yeah, I can’t speak to whether this was true or not, but a co-worker served at a base in Thailand back during the Vietnam War. He said they could pick up miniscule surges in electric currents caused by electric typewriters. They could monitor electric power lines in the Soviet Union and reconstruct documents being typed up.
Sounds similar in concept to the description in this post.
An old mechanical typewriter would be safer ….

I could rant all day about my own experiences, but “preaching to the choir”.

LOL! That may well have been the same base where I spent about a year of my enlisted life in their secure communications facility about the same time you were the OIC. On a lark one day I followed the communication lines from our facility. They crossed over the main access road to the base in conduit, then went into another (unguarded) building. There was one room in that building where all the communications cables for the entire base passed. When I peeked in the door, I found a foreign national in there mopping the floor. Anybody could have put any kind of listening device in there. Yes, communications security was surely a joke back then.

I have no problem guessing the hand signal Netanyahu uses for Obama.

Yeah…. and it is efficient too. Saves 4 fingers.

…mumbles something about enigma machines…

Yes, typewriters can be bugged. Just like you can find any place on the globe using a map and compass. PC’s and networks, like GPS, just make it orders of magnitude easier. The lesson here is not to just give up. The lesson – as always – is not to be the low lying fruit. And check your goddam typewriters before you install them in the beeping high security wing.

The Guardian said that the Germans were considering using MANUAL typewriters, as in purely mechanical and don’t plug in to the wall. From the other linked article, the Soviet espionage was on IBM Selectrics. They were, you know, ELECTRIC and the bugging was in essence keylogging.

I’m not saying that manuals might not be susceptible to bugging at all, just that the two articles seemed to not be talking about the same thing.

I picked up on that also. I don’t remember about the Selectric IIs, but Selectric III had a memory and you could program disclaimers, and other repetitive blurbs and the machine would type them when you hit the correct keys.

Yes, and there was a control signal to move the ball so that the desired letter struck the ribbon; IIUC that was what Soviet Intelligence was intercepting.

It could also be done merely on the sound emitted from the keys being tapped. Takes a little time to tune it, but each key on each machine is different enough to log based purely on the sound it makes when struck.

I have Hitler’s secretary’s biography . The typist can always talk later . Not that she let on major secrets but they really needed to round all Die Madchens up & kill them if they wanted things to go no further .

Being a typist can be rather dangerous .

Growing up, my parents had a family friend who had been a typist on the Manhattan Project at Los Alamos. She was recruited right out of a rural New Mexico high school, where she had studied no chemistry and only basic math and science. No one in her family had ever completed high school and worked as ranch hands on the family spread. What she could do was type close to 100 words a minute with zero errors. She had won state-wide typing competitions. They taught her to use a Dictaphone, and she spent a lot of time in conversations with the “chemists” (as they were described to her) so she could get to understand “their funny accents”. She understood none of what she was working on, but understood that it was important. As to the secrecy, when she or the other typists messed up a page, they called the supervisor over. The paper was taken and placed in a burn bag. All carbon was used once and when the multi-page document was finished, the carbon sheets went into a separate burn bag.

They never wondered about the secrecy, because they were young and “there’s a war on”. Even when Trinity was exploded, they were told that an Army munitions dump had blown up, but that seemed strange, because all the “chemists” seemed to be in a good mood the next few days!

Read the “Tower of Secrets” by Sheymov. The Chinese acoustically bugged the Russian embassy. The Chinese used fake chimneys to channel the sound into wave guides and recorded the information outside the embassy fence. It was only discovered when it was discovered that the chimneys did not draw.

I understand that typewriters can be recorded by the vibration they induce on windows around a building. Proper analysis of reflections in eyeglasses can be read in photographs. There are a lot of ways to get information……

Sure, typewriters can be bugged, but at least it requires some effort. Storing and reading email, on the other hand — easy!

And this: Russia switched to typewriters: http://www.bbc.com/news/world-europe-23282308

Nothing is foolproof. But if you can make it more expensive and troublesome for the bad guys to snoop on you — more so than the expense and trouble you go to avoid being snooped on, it’s a win.

One of the reasons the Soviet empire fell was because of the huge expense of maintaining a security apparatus. That was money that didn’t go into the consumer economy.