As all sides in the conflict point fingers, victims’ families are left waiting. 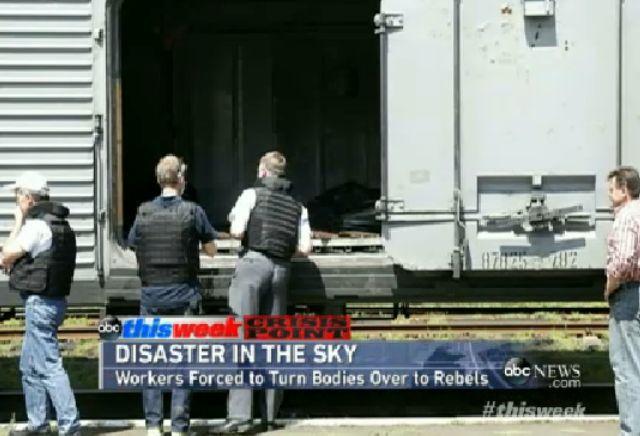 The remains of nearly 200 passengers from downed Malaysia Airlines flight MH 17 have been removed from the wreckage and placed in refrigerated rail cars in a rebel-controlled area of eastern Ukraine.

It may be some time before the bodies of the victims of Malaysia Airlines flight MH 17 are returned to their families.

In an exclusive interview with ABC News today, the leader of the self-declared Donetsk People’s Republic said they would not be turned over until international inspectors come here to inspect them.

“We can and we want to give bodies to the relatives but experts have to examine the bodies here. That is international practice,” Alexander Borodai said.

He feared that if the remains are turned over to the Ukrainian government they will be used as evidence to blame his fighters for shooting down the plane, something he again denied.

The problem is that the team of international investigators remains in Kiev. Despite what has been described as a “preliminary” agreement on their travel to the crash site, there has been no announcement about when they might finally arrive.

The report indicated that the remains of passengers are currently being stored in refrigerated rail cars. Borodai said he was willing to turn them over to the Russian government.

But given recent statements, including from Secretary of State John Kerry, about Russia’s suspected role in providing separatists with weapons that could have shot down flight MH 17, that seems an arrangement that would likely draw some opposition.

A NY Times report described a chaotic scene at the site, “where an incoherent recovery effort is being carried out by motley groups of mostly well-meaning but untrained people” – local miners, residents and “poorly equipped” emergency service workers.

The Organization for Security and Cooperation in Europe (OSCE) was trying to negotiate with separatists to move the bodies out of the conflict zone and under Ukrainian government control, Reuters reported.

Meanwhile, many have expressed concern that the crash site has been virtually unguarded, though Borodai dismissed such concern, according to the ABC News report.

The U.S. State Department on Saturday criticized the reported security conditions at the crash site.

In a telephone call, Kerry told Russian Foreign Minister Sergei Lavrov that “the United States remains deeply concerned that for the second day in a row, OSCE monitors and international investigators were denied proper access to the crash site,” the State Department said.

“The United States is also very concerned about reports that the remains of some victims and debris from the site are being tampered with or inappropriately removed from the site.”

Kerry’s spokeswoman Jen Psaki said the United States condemns “unacceptable” insecurity at the crash site, calling it an “affront to all those who lost loved ones and to the dignity the victims deserve.”

And on Sunday, Kerry again expressed outrage over the management of the crash site and removal of bodies and evidence, according to the National Journal.

In a full run of the Sunday morning news show gauntlet, Secretary of State John Kerry attempted to push the Obama administration’s developing line on Russia after last week’s MH17 crash: Everything is on the table. Except troops.

On Fox News Sunday, Kerry said that the investigation into the crash has been “seriously compromised” by “drunken separatist soldiers” who have been removing bodies and evidence from the scene “unceremoniously.”

Pro-Russian separatist militiamen have taken custody of about 200 of the 298 bodies found at the wreckage site of Fight 17, according to Ukrainian officials. Kerry condemned the behavior and again pointed the finger at Putin.

“What’s happening is really grotesque, and it’s contrary to everything Russia and Putin said they would do,” Kerry told NBC’s David Gregory. “The separatists are in control.”

As accusations continue to fly on all sides, families wait to say goodbye to their loved ones.

Video report below from ABC News.

The notion that nobody can get in there to find and disposed of the remains, and get them back to their families because the RUSSIANS will murder them on site is absurd.

The cowardliness and ineptitude of the world community is beyond a disgrace.

They enbalm their own heads of states and put them on display, so why not?

It was state secret how they did it . Now every Hollywood actress looks like they belong in a frilly satin neck piece in an open coffin. Eeerie . I think Gorby sold the formulae but left out a few steps like – check if dead.

“He (Alexander Borodai) feared that if the remains are turned over to the Ukrainian government they will be used as evidence to blame his fighters for shooting down the plane, something he again denied.”

The rebel’s refusal to release the corpses to their families and international investigators makes them accomplices to those who shot down the plane.

It takes weeks / months to clear air accident corpses & identify parts scattered . Fact is most of the corpses will be missing many bits . Some tissue will have had to be burnt for disease control .

. So families might as well chill out . Dey ain’t no more .Dey iz a gonna .