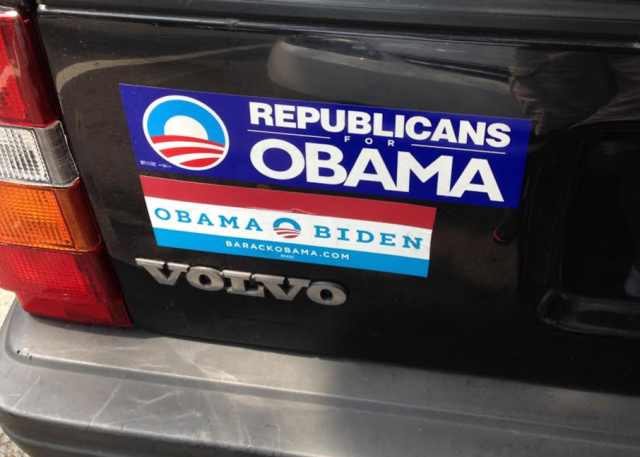 While walking in Chelsea (NYC, not London) last Sunday, I came upon a Volvo with a bumper sticker proclaiming “Republicans for Obama.”

The Republicans have a big tent, from religious, social conservatives to libertarians, but I have a hard time believing any Republican could be this stupid.

Thank you so much, Professor.

Volvo? With his Main summer house, Christopher Buckley always struck me as the Land Rover type …

Maine, not Main, of course …

That looks like a Volvo 740 or 940 – twenty years old, and not likely to be a Buckleymobile.

“but I have a hard time believing any Republican could be this stupid.”

1. Chuck Hagel
2. Ray LaHood
3. John “I-will-not-shut-down-the-government” Boehner
4. You guys continue, I have to go to work…

My first thought was Grahamnesty or McCain.

“… but I have a hard time believing any Republican could be this stupid.”

I don’t. Over the years, the Democrats have moved to the extreme Left, while the Republicans have gone over to the near Left. Conservatives, on the other hand, remain on the Right.

You see the truth of the matter – progressives have been rowing to the left, and towing most Republicans with them. (I liken it to the boating term “warping.”) Yet the left cries that real conservatives are “moving farther to the right,” when in fact they haven’t moved at all.

I live in lower Fairfield County, Connecticut. There was actually quite a bit of the phenomenon here: lifelong fiscally conservative, socially liberal upper and upper-middle class Republicans who supported the well-spoken, well-creased-trousered Harvard Law Review president over the awkward professional military background McCain and the socially de trop Palin.

It was a class-based vote, in many cases, with the added plus of supporting the first black president (aren’t we tolerant!). Obama sounded like ‘one of us’ and knew how to mingle with ‘us’. McCain was bad enough – USNA is acceptable, but career Navy, son of career Navy admiral, not so much – but third tier state college and thoroughly petit bourgeois Palin was ‘beyond the pale’. All those awkwardly named children, that husband, that accent! No, no, no …. And then there was the whole ‘war on women’ thing – those good Republican country club women who lunch can easily be terrified by the prospect they can’t arrange a legal, safe, abortion if Muffy slips up, even if they only discover she’s pregnant when she starts to show at 5-6 months. You’d be surprised…..

I can see this being true, but I sure as hell hope that they would have got over it by the 2012 election.

Ahhh … so you’re in RINO country … home to Mr. Shea. I despise RINO’s as much as I despise liberals and democrats. So Palin did not go to a ‘stellar’ school, and I’m sure the media raises won’t let us forget that … but don’t forget that Lieawatha went to a law school ranked 184 at the time … and BTW, when does Harvard hire professors from laws schools ranked hire than 10?

That’s about one of the best explanations I’ve seen for what goes on with NE Republicans. And you’re right, it is a “class” issue. They don’t want to associate with the likes of the traditional, so-called fly-over country members of the Party. That’s why we’re better off being known as conservatives instead of by the party identity.

I’ve kept this list of “stupid conservatives” who endorsed Obama bookmarked for 5 or 6 years now. It’s painful to look at the names of so many people prominent in Republican politics who joined the irrational cult-like Obamamania frenzy back in 2008.

Just as Robert “The Prince of Darkness” Novack was a Demicratic because if you live on DC, Republicans have no chance to vote for anybody that matters, these are probably true RINOs, living in a community that is so far majority Republican that registering as a Democrat is an Ct of self-mutilation.

I have a hard time believing any Republican could be this stupid.

It’s a “concern troll” revealing himself to the world.

And need we say, Professor, it’s “Republicans for Whom” … *ducks*

That’s one of the toughest, along with worse or worst. 🙂