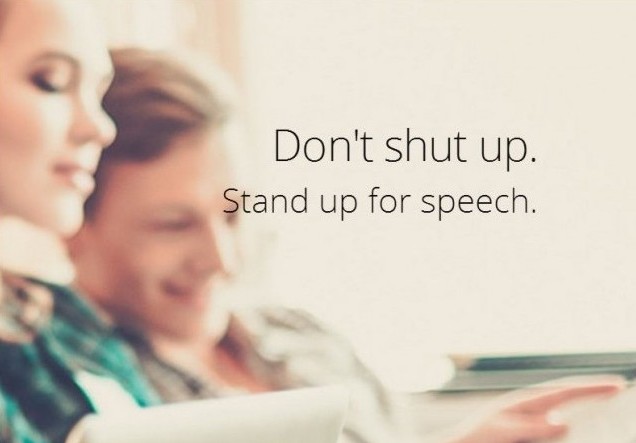 Speech codes are closely related to other forms of campus oppression, like the stripping of due process rights for men accused under vague and overly-broad definitions of sexual assault and subjected to kangaroo courts.

It all part of enforcing compliance with a dominant campus ideology (almost always progressive and radical feminist).

Our friends at The Foundation for Individual Rights in Education (FIRE) have led the fight against speech codes for years, and today they announced a major litigation effort:

This morning, the Foundation for Individual Rights in Education (FIRE) coordinated the filing of lawsuits against Ohio University, Chicago State University, Iowa State University, and Citrus College (Calif.). The filings launch FIRE’s new Stand Up For Speech Litigation Project, a national effort to eliminate unconstitutional speech codes through targeted First Amendment lawsuits. The project and lawsuits were announced today at a press conference at the National Press Club.

The Stand Up for Speech Litigation Project is described as follows:

FIRE’s new Stand Up For Speech Litigation Project is a national effort to eliminate unconstitutional speech codes through targeted First Amendment lawsuits. By imposing a real cost for violating First Amendment rights, the Stand Up For Speech Litigation Project intends to reset the incentives that currently push colleges towards censoring student and faculty speech. Lawsuits will be filed against public colleges maintaining unconstitutional speech codes in each federal circuit. After each victory by ruling or settlement, FIRE will target another school in the same circuit—sending a message that unless public colleges obey the law, they will be sued.

How insane are campus speech codes?

When a student is threatened with discipline for handing out copies of the Constitution, you know something is very, very rotten in the State of Campus Speech:

You can donate to The FIRE here.

I think the Campus Speech Codes should be recognized as the next stage of the targeting of values, attitudes, and beliefs via OBE in K-12. The consistent declaration among those wishing to use education for transformational change is that they want to foster a certain Worldview. Acceptable perspectives of how the world is to be perceived.

The Campus Speech Codes essentially dictate that anyone without the mandated Worldview needs to shut up. It is outrageous and I am glad FIRE is in this fight. The battleground though is the entire push to prescribe acceptable beliefs in the 21st century on the basis of what’s supposedly conducive to economic and social justice. I should know. I just finished reading Robert Dahl’s After the Revolution: Authority in a Good Society that could not have been more graphic on where this is all going.

OBE subjected to PC would lead to a Humanist Utopian Caliphate which would then lead to despair, dystopia, nightmares, Newspeak and Victory Gin.

You have to admit, the US Constitution is a pretty radical document.

Great work by FIRE. It’s about time we started using the courts to push back against these fascists. Take a page from Alinsky’s manual and make them play by their own rules. They love intimidation by litigation, so give it to them — good and hard.

I’m going to go make a contribution to FIRE. This is an effort that deserves our support — financially and otherwise.

The thought that ‘administrators’ outnumber teaching faculty on college campuses – and that they think up abuses of their petty powers as the MJC staff did – points to the need for some serious restructuring in the post-secondary education world.

Just limit the administrative budget to half of the teaching budget, for starters.