They ignore the reality of Jew hatred as a powerful motivating anti-Israel force. 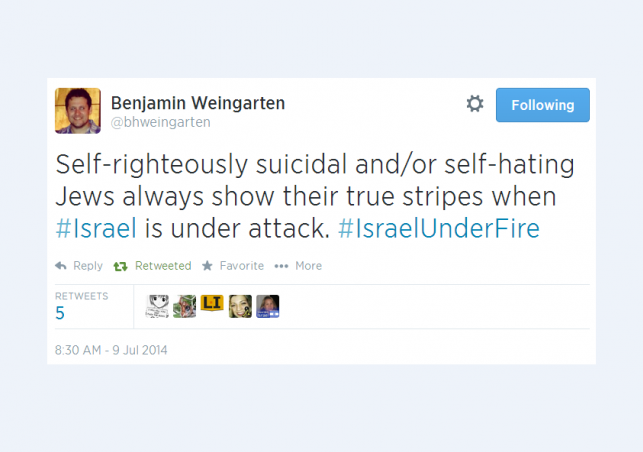 Seems way too subjective, and the exception not the rule for those left-wing Jews who see only evil in Israel, and only good in Israel’s enemies.

Certainly, there are self-hating Jews, many of whom populate the anti-Israel boycott movement.

But for the most part, they don’t hate themselves. They adore themselves, and consider that they alone have found the proper formula for being a good Jew. They have a superiority complex.

That they ignore the reality of Jew hatred as a powerful motivating anti-Israel force is not a matter of self-hatred, but I’ve never known what to call it.

It captures the essence of much left-wing Jewish hatred of Israel, which is divorced from the real world and dependent upon a structure of the conflict that never existed except in their own minds.

Of course, I’m not by inference saying that Christians do a better job of living a Christ-like life.

Considering the rivers of Jewish blood spilled over a period of almost 2,000 years by people who called themselves Christians, this is a pretty sick comment. And for the record, you made the Moslems look good by contrast. (Or course, the Atheists were the worst.)

Remove the beam from your own eye (yes, the Rabbis also knew that phrase), please.

Did it ever occur to you that the relentless pressure on Jews to give up their religion may be the cause of a lot of this?

However, the Rabbis did point out that the worst anti-Semites were always Jews. “I only set up your enemies from amongst yourselves.” What we mean regarding self-hatred is that they hate the Jew in themselves. A perfect example is Karl Marx. Although Christianity is the only religion he practiced as an adult (then atheism, of course), Paul Johnson points out that Communism is basically an expansion of anti-Semitism to a class.

Sadly, until the arrival of Israel, Jewish people often projected weakness. The weak are preyed upon.

I remember walking out of a synagogue when the Rabbi said the road to peace was to “love your enemies more then your friends”. This not uncommon thought pattern breeds narcissistic anti-Israeli Jews. Actually implemented it destroys any chance of group cultural cohesion. I now understand why Moses broke the tablets in shock. There is a cultural depravity in much of Judaism.

“The weak are preyed upon” Having a Jewish state doesn’t mean that Jews are not preyed upon, look at the recent shootings in Belgium or the daily incidents in France. If a misogynistic man beats his wife we do not say that the solution is for the woman to be stronger although if she could, it would temporarily help the situation.

Also your statement “There is a cultural depravity in much of Judaism”. I think this comes across as much different to what you intended it to convey surely?

Readers can interact/click with a Twitter link. Not with JPG images.

I agree a link to the Twitter post is more useful, but for posterity purposes sometimes it’s required to take a screen-cap. People delete their tweets constantly, especially if they’re controversial.

Great post. The key question is how can we prevent these liberal Jews from taking the rest of us down with them as they commit “self-righteous suicide”?

One idea would be to offer them a free holiday in Malmö, with the proviso being that the men have to walk around in public wearing a yarmulke and the women have to have an Israeli flag pin prominently displayed. I wonder if that would do the trick?

Or as Pamela Gellar refers to them “Jewicidal.”

Good one. There is also JINO from Debbie Schlussel – Jews In Name Only.

“They adore themselves, and consider that they alone have found the proper formula for being a good Jew. They have a superiority complex.”

Yup. And their religion is of nature, not of nature’s creator. In other words, idolators. Not Jews at all. The classical rabbinical definition of “Jew” via race and maternity causes continuous confusion. A parallel is classical Asharite assertion of Islam as a nation. Both assert as ultimate something that is less than ultimate. A really bad idea. Corpus Christianum was/is another parallel and equally bad idea.

My term for these self-adoring (nature-worshiping, idolatrous) ones is fascists.

Actually, the rabbis considered an idolater is a Gentile for just about all purposes.

But today we generally work wit Maimonides’ assumption that a person not brought up in his religion cannot be a heretic.

If I believed the stories about the atrocities committed by Jews against the Palestinians, I’d be against Israel, too. The Palis have been churning them out according to the terms of the Hamas Covenant for decades, now, and even though they are regularly debunked, they have an effect, especially on those whose research skills are weak or nonexistent. Add to that the Jewish delight in oddities, and you have a recipe for a receptive group of idiots, which is continually replenished each generation.

About those debunked stories of atrocities by Jews: case in point, from today.

I’ve said this over and over. Hatred is overrated as a motivator. The bulk of the Moslem/Arab world, and a large portion of the rest, simply “believes things that ain’t so”. And the Western media is complicit, as to some extent is the Israeli media.

Self righteously suicidal could also be applied to all the radical feminists who obsess about the so called patriarchy in Western civilization even as they ignore the status of women in most third world nations.

But, really, ALL Collectivist thought is fundamentally misanthropic.

Collectivists just don’t like people, don’t trust people, and their systems all tend toward extinction…for everyone but them.

A lot of people don’t connect how un-unified Jews were in WWII with Jews with the “Jew flu” today (hat tip Tamar Yonah podcast for that term).

If you limit your reading to just the non-fighting side of Jews in the holocaust, you cannot make this connection, but it exists and it is baffling. The Jew flu is the same mentality that made it so easy for the Pograms and WWII holocaust to occur.

In many ways I see Israel as the Sparta of our time. If you fight one, you fight them all, and even if you manage to win, they will make damn sure you are not better off for it. God I love them for that while still being a nation of compassion.

As a pro-Israel gentile, I’ve pondered this phenomenon a lot. Here’s my take:

A superiority complex manifests as self-righteous behavior.
The suicidal tendency is inadvertent as the lofty intent is to coexist, no matter how delusional.

But these anti-Israel Jews have tweaked the pinnacle of self-actualization.

Oikophobia is the rarefied air over Maslow’s Pyramid. These people see no more divine show of nobility than to ruthlessly criticize their own. They think it sets them apart. It goes hand in hand with the group-think conventional wisdom of the left that common sense is by definition almost always wrong. Common sense is pedestrian and for the unwashed masses, especially those without law degrees or other advanced degrees.

Also almost always wrong these people believe is clear cut right and wrong. They believe there are no simple truths or answers. Everything is nuanced and right and wrong infuses all parties to a conflict. It’s the Hollywood formula these days. A formula so formulaic it’s almost a new branch of chemistry.

That rarefied air of noble self-vilification is inviting. But the leap off the pyramid leads straight down to the reality of the hard ground. That where the truth lies.

Or, it’s just that Lib-tard moronity knows no racial boundaries.

Thanks for this very interesting idea (and educational for me – I had to google Maslow’s Pyramid and oikophobia), it makes a lot of sense. David Suissa has a terrific article that I think takes the same tack
http://www.jewishjournal.com/david_suissa/article/the_honesty_of_war.

Basically, it is wonderful to feel like you are a sophisticated, intelligent, self-actualized superior person. But the reason that Israel is such a defining issue, whether one is Jewish or not, is that the lives of millions of Israelis depend on a person being able to deal accurately with reality, however different one might wish it to be.

this comment was intended as a reply to LukeHandCool.

As you may know, RuthC, this phenomenon is not limited to leftist Jews.

Many American leftists seem to live to endlessly find fault with America.

I saw the same phenomenon among leftist Japanese when I lived in Japan. They seemed to expect that it would please me, a Westerner, immensely to hear them bad mouth their own country and culture endlessly.

I think the ability to soul search and admit faults and shortcomings is indeed an admirable trait. It’s the antithesis of tribalism.

But these people delude themselves and do it for show. They have fetishized it and feel like they belong to an exclusive group.

The problem is, we and our children and grandchildren will have to live with any effects this ego-inflating luxury of theirs causes.

Thanks for the link. I agree completely with what he said and would bet he’d agree with what I said.

If they are not here in Israel, they are homicidal, not suicidal.