Only one side uses civilians as human shields 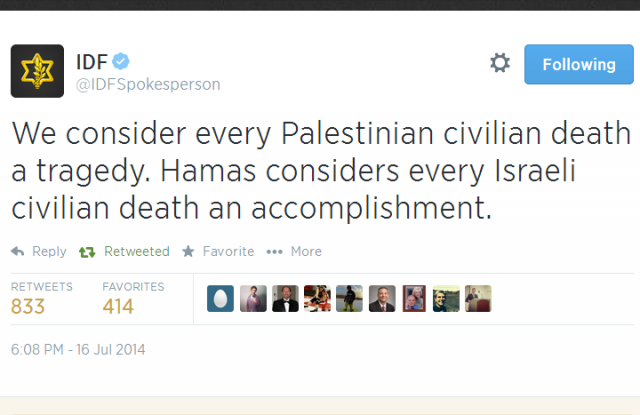 The killing of four boys on a Gaza beach has generated enormous criticism of Israel.

Israel itself has expressed sorrow at the killing (see Featured Image Tweet).

But one fact not reported anywhere except WaPo is that the area was known to be used for rocket launching:

This clip is from British news. Note how the interviewer doesn’t even attempt to hide his bias. Welcome to British media, and increasingly, U.S. left-wing media.

Mark Regev, a spokesperson for the Israeli Prime Minister’s office, held his own and handled it well:

In other news today, even the United Nations refugee agency admitted that rockets were found hidden in a school:

Yesterday, in the course of the regular inspection of its premises, UNRWA discovered approximately 20 rockets hidden in a vacant school in the Gaza Strip. UNRWA strongly condemns the group or groups responsible for placing the weapons in one of its installations. This is a flagrant violation of the inviolability of its premises under international law. This incident, which is the first of its kind in Gaza, endangered civilians including staff and put at risk UNRWA’s vital mission to assist and protect Palestine refugees in Gaza.

There’s only one side doing that.

Update: UN not quite truthful that this was the first time:

.@UNRWA says discovery of rockets at its Gaza school is "first [incident] of its kind." This, of course, is false: http://t.co/EtIEdBRRky

“This is a flagrant violation of the inviolability of its premises…”

Israel is expected to have Superman’s X-ray vision.

I think circus clowns know and dress better than to wear that sort of a tie together with orange socks. It bespeaks of his “judgment” (or lack of it).

That interviewer is just evil. Nothing short of it.

The Washington Post journalist in the area quoted as saying rockets were launched from the area had better leave Gaza.

OK, armchair criticism here but I think that Mark Regev should have done a MUCH better job. This was an opportunity to talk directly to the British public and he was not effective. He should have had a graphic showing how many rockets fired from Gaza fall short causing civilian casualties. He should have pushed back on the casualty figures as these have way overestimated the number of civilians as was shown in 2009. He did not forcefully defend Israel but blamed Hamas, a typical member of the public would have read this as “whining”.

My recommendation is for Mark Regev to take lessons from Rep. Trey Gowdy for how to effectively communicate, or to refer the BBC to Prof. Jacobson who can effectively explain the facts.

shouldn’t there be an “unexpectedly” in the post headline? 😉

While the deaths of 4 children is tragic, didn’t this current conflict begin because 3 Israeli boys were murdered by Palestinians?

My understanding is that the current escalation of the conflict was Hamas dramatically increasing the level of rocket fire into Israel. This was hard on the heels of the kidnapping and murder of the three Israeli teenagers (whose killers have still not been apprehended).

It seems that the killings of Gilad, Naftali and Yifrach strained the international standing of Hamas at an inconvenient time for them when the US was supporting the “unity government” with the PA. On the other hand, although Israelis have suffered far too many terror attacks, in fact a young Israeli girl was brutally murdered right before these murders, the widespread cheering of the attacks by Palestinian society really hardened Israelis hoping for peace into a sober realization of the strength of the hatred directed towards them.

During the search for the teenagers, the Israeli police and army seemed surprised to discover to what extent Hamas had stockpiled weapons and built a terror infrastructure in Judea and Samaria. This may have contributed to an enhanced sense of the need to curtail Hamas activity.

This action is specifically defined as the war crime of Perfidy in the Geneva Conventions. Only the Islamists are actually committing war crimes as defined in law here.

“Update: UN not quite truthful that this was the first time:”

If the UN HAD been truthful, THAT would have been a ‘first time’ !

They were shocked, shocked! To some extent, UNWRA is Hamas. They ought to be disbanded immediately.

Two missile warnings just now. (I have them automatically playing, but it doesn’t say from where. There have been a LOT lately.)

What the hell is wrong with WaPo? The reporter gave an honest report, even started with a pro-Israel header. Doesn’t he value his life. (You understand why they shoot from near the hotel; they use foreign reporters as human shields.)

The comments are horrible. Where are the other commenters?

Another missile warning. Didn’t make it through the clip. There’s another one.

(They’re not where I am; I’m in the North We did have one at work, and I slept through one at home.)

There were a couple of warnings from the Golan (near Syria).