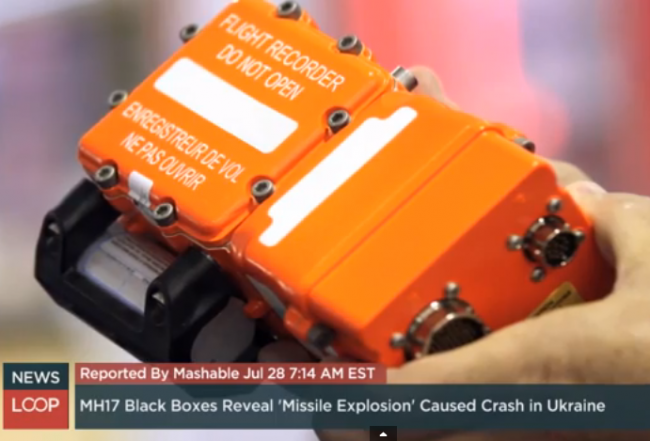 British and American media are reporting that Ukrainian government officials have seen data from the say the downed Malaysia Airlines’ black box recorders. According to these officials, the airliner suffered an explosive loss of pressure after it was punctured by multiple pieces of shrapnel from a missile.

They say the information came from the plane’s flight data recorders, which are being analysed by British experts.

However, it remains unclear who fired a missile, with pro-Russia rebels and Ukraine blaming each other.

Many of the 298 people killed on board flight MH17 were from the Netherlands.

Dutch investigators leading the inquiry into the crash have refused to comment on the Ukrainian claims.

Meanwhile those same Dutch investigators in charge of finding out what happened have yet to visit the crash site, view the wreckage or see the human remains from the aftermath of the downing of the plane.

The latest setback came Monday, when a 45-person team of Dutch and Australian experts, accompanied by monitors from the Organization for Security and Co-operation in Europe, abandoned their effort to reach the site after hearing explosions and being warned of heavy fighting in the area.

“We all know there are still human remains out there exposed to the elements, number one,” he said. “Secondly, it is one of the biggest open crime scenes in the world as we speak, and it is not secured. There’s no security perimeter around the 30- or 35-square-kilometer site.”

According to unconfirmed reports from pro-Russian rebels, Ukraine’s military broke through to part of the crash site Monday and had stationed armored personnel carriers and dug trenches there.

Both Russia and the pro-Russian separatists in Eastern Ukraine continue to deny responsibility for shooting down the aircraft despite a building body of evidence put together by United States military and diplomatic officials in the past several days.

Meanwhile, the United Nations Commissioner for Human Rights on Monday called the downing of the passenger jet a “war crime.”

I am watching this story. There were up to 37 Australian citizens and residents on board. Some of the residents were not citizens, such as the Van Hende family, and the German national who was a teacher at a local international school. All of them are considered to be Australian. The situation is complex because many of the victims were Dutch with dual citizenship.

The whole thing is very sad, but it is up to the Ukrainian authorities to ensure that the investigating team from Holland and Australia can reach the site and perform their investigation in safety. The Russian separatists need to leave the area, and I might add I believe that pressure should be placed on Putin to get the Russian backed separatists to back off and to leave the site ASAP.

Possibly a war crime, probably not.

A war crime would require the crew and people who ordered it knew it was a civilian plane.

If the crew in good faith thought was military it is not.

Reports seem to indicate that Ukrainian Air force was operating in the area.

Investigate yes. But don’t throw speculative charges into the mix before investigating.