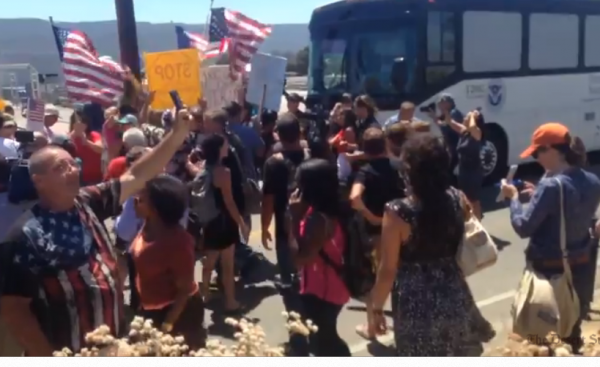 Thousands of unaccompanied minors have flooded across our border, overwhelming border agents leading to immigration officials opening processing centers around the country.

Protesters gathered in Murrieta on Tuesday where around 140 undocumented immigrants, including lone children, were brought to be processed at a Border Patrol office.

And when the buses arrived carrying the immigrants, the drivers ended up turning around and leaving when the protesters refused to let them pass. The buses instead headed for another border patrol station.

The immigrants had arrived in San Diego earlier in the afternoon at Lindbergh Field.

The Desert Sun has additional details with a timeline (and a video at the link):

3:21 p.m.: Union representative Ron Zermeno tells The Desert Sun that the Murrieta Border Patrol station will not resume normal operations but instead send its entire staff to the San Diego area to help with the processing of the re-routed immigrant families.

3:09 p.m.: With the protest too much in Murrieta, Border Patrol union representatives confirm the buses are heading to a San Diego County processing center.

2:55 p.m.: The crowd of protesters in Murrieta blocked buses from entering the Border Patrol station. Officials did not immediately say where they were going to be detoured.

The Desert Sun report also noted that 3 more flights of immigrants were slated to follow.

Between the gross violation of law and risk of infectious diseases, Californians aren’t the only ones unhappy with the crisis. For example, fellow blue staters in New York are also complaining.

Customs and Border Patrol has been shipping illegal immigrants to facilities all over the country and reportedly are even looking at using an abandoned Walmart in New York, according to Congressman Chris Collins (R-NY).

“It is unacceptable the federal government is trying to force the hardworking taxpayers of New York to foot the bill to house undocumented immigrants,” said Congressman Chris Collins. “The President’s actions have fueled the current crises along the southern border, and now New York residents are being directly impacted by his irresponsible actions. If President Obama was committed to enforcing the immigration laws currently in place, this would not be an issue. Instead, the President has decided to pick and choose which laws he wants to enforce, creating an environment where wrongdoing goes unpunished.”

In San Antonio, federal officials say a child in a temporary shelter is still recovering from swine flu.

As Americans look forward to celebrating Independence Day, many of them will be discussing their plans for Election Day.

Good. We need more citizens like this pushing back against this lawless and corrupt administration. To quote a well-known community agitator: “get in their faces!”

If Deval Patrick were still in the fedgov, he’d be trying to prosecute the protesters.

(As far as I know, to this day he has never acknowledged that he did wrong.)

It will be interesting to see the FedGov reaction to this. I am curious if they expected any push-back or where caught flat-footed and are surprised by it.

With these people standing up, others in the U.S. will do the same.

The U.S. Government vs. the people. I know what side I am on.

I’m sure Obama will be appropriately concerned – just as soon as he reads about it in the papers.

You “assume” he can read.

“Undocumented immigrants”? How about. “Illegal aliens”?

The common term is for a tsunami of illegal activity is “crime wave”.

This is the first thing we can and need to do: stop using this misleading phrase “unaccompanied minors.” (Note for this blog: could you consider not putting it in headlines.)

They are “badly parented children,” they are children in “the temporary custody of coyotes.” I’m sure some phrase can be put together that addresses the facts of their arrivals, so people understand it is the irresponsible behavior of their parents that started all this. Nothing to do with our perfectly fine immigration system.

There are certainly minors crossing the border, but there appear to be as many, if not more, who are adults. Breitbart’s site had some photos a couple of weeks ago of illegals in detention centers near the border, and most of the Guatemalan group appeared to be overweight, middle-aged women.

Most everything Liberals do is a sham, from man made global warming…uh, climate change,…uh, climate disruption, to the war on women!

Well done! We need to pack the streets in front of the White House and the Capitol to show our dissatisfaction with these politicos.

Petulant Obnoxious does not care about American citizens or American economy, law and order, system of government.

He is a relic of Islamist and Communist ideology.

He needs to be put in his place (Kenya, Pahkeestahn or Indonesia)

An unexpected side effect of the Supreme Court’s decision in the Arizona case a few years ago perhaps? If I recall correctly one of the tenets of that decision was that states are powerless to handle things under the Federal domain! Even if the Federal government chooses not to enforce or is incompetent at it (Holder’s Justice Department…yeah yeah I repeat myself I know)

Hit them where it hurts…. set up tent camps on golf courses that Obama uses.

Charter a busload to arrive at the next birthday party for one of Pelosi’s grandkids. Post video of her face as they disembark the bus, and compare/contrast to her expression at the little meet-and-greet she did.

No… there is no room in Alaska for them either… SEND THEM HOME!!

What a great idea!

This town is in the sparsely populated farm country of Michigan’s Thumb.

They are stashing these illegals all over the country so they can’t be tracked.

It’s no coincidence all this started just as school was let out for the summer–as it gives the Feds time to get them (re)located and enrolled in schools for the fall.

“¿Cuál es el nombre de esta ciudad?”
(What is the name of this town?)

I can’t remember which one it was, though we both know it.

I saw the story on Mlive a couple days ago, and tried searching for it earlier so I could link it, but can’t find. Not knowing the town’s name doesn’t help the search-

Vassar is barely in the Thumb, though.

This is the civil disobedience Rags and I have been promoting as a way for grassroots Americans to fight this crap. Ain’t nobody else gonna fight it for us.