Western governments try to hit Putin’s pocketbook in wake of shoot down of Malaysia Airlines plane. 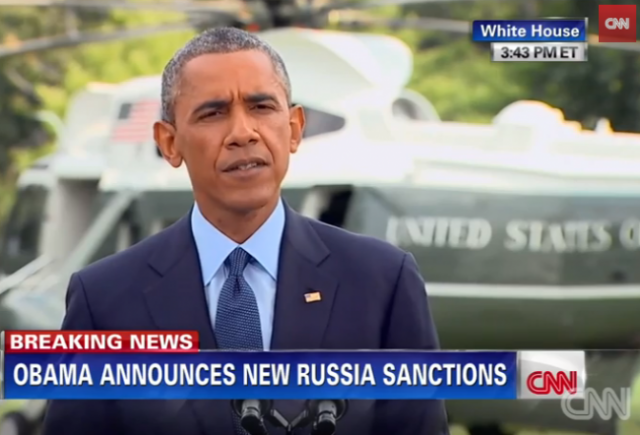 In another of his frequent ‘announcement drops’ before entering Marine One, President Obama yesterday declared that the United States and the European Union had agreed to a new round of sanctions against Russia. These new sanctions come within two weeks of Malaysia Airlines Flight 17 being shot from the sky over Ukraine.

From The Wall St. Journal:

The EU targeted the energy, arms and finance sectors, with details due soon. It’s not a profile in courage: The EU only blocked future arms business with Russia, not past deals.

The U.S. restricted the access of three additional Russian banks to American capital markets and blocked future technology sales to Russian oil companies. The U.S. stopped short of broader sectoral sanctions on Russia’s banks. Vladimir Putin himself could be included on a future asset and travel ban list.

The question remains whether these latest moves by the West are enough for Vladimir Putin to give up his support of the pro-Russian separatists still battling the Ukrainian government on the ground in Eastern Ukraine. It is possible that the West still isn’t willing to do what it needs to do to maximize the economic pressure on Putin’s Russia.

The U.S. sanctions, however, are notable for an institution that is not on the list: OAO Sberbank. Sberbank, majority-owned by the Russian government, is the country’s dominant lender. With more than 19,000 branches, it controls a plurality of Russia’s banking assets and boasts the highest market share in retail, business and corporate banking. It also has substantial investment- and corporate-banking activities throughout Europe.

But the EU sanctions also have a notable gap. The EU subsidiaries of the Russian banks are exempted from the sanctions, according to European officials familiar with the sanctions.

The theory behind sanctions is that Putin feels so much economic pressure at home that the cost of supporting the weakening Eastern Ukraine rebellion becomes too high a price. However, the West now has a long track record of misjudging nearly everything Vladimir Putin does — or reacts to.

In fact, there is already a return volley from Russia following Obama’s announcement.

The first sign of retaliation came after Russia announced a ban on most fruit and vegetable imports from Poland.

Russia buys more than 2 billion euros (£1.6bn; $2.7bn) worth of EU fruit and vegetables a year, making it by far the biggest export market for the products.

Polish fruit growers said the ban was political but Russia said the move was for sanitary reasons.

Poland has been one of Putin’s strongest critics and has urged Germany and the United States to take stronger action against Russia since the Ukrainian crisis began.

Meanwhile, the feckless Secretary of State John Kerry seems to be floundering in the Ukraine crisis as he is in the Israeli-Hamas conflict. Today, Russian Foreign Minister Lavrov appeared to throw Kerry under the proverbial bus.

Lavrov said that Kerry had agreed with the need to return to “the firm basis of the consensus reached on April 17”. “We agreed that the meeting to be held in Minsk must be directed towards working out agreements on the implementation of the Geneva Statement and the roadmap proposed by the OSCE Chairperson-in-Office and Swiss President (Didier Burkhalter) as a follow-up to the Statement,” he said.

“This once again raises the question of ability to come to agreement because literally an hour after my conversation with Kerry, he (Kerry) spoke at a news conference with Ukrainian Foreign Minister Pavel Klimkin and said that Ukraine was finally ready to cease fire and begin a dialogue and that all components for the dialogue with the militias were in (Ukrainian President Petro) Poroshenko’s peace plan,” Lavrov said.

“Kerry did not mention the Geneva Statement publicly and referred to Poroshenko’s peace plan, which says that the militias must surrender their arms and hope for amnesty or they will be destroyed. You will probably see the difference,” the Russian minister said.

On the ground, the Ukrainian army has re-taken a lot of territory from the pro-Russian separatists in Eastern Ukraine. So much so that a last stand in the city of Donetsk is expected in the coming days.

If the rebels falter, Putin has a choice to make. Will he allow the Eastern Ukrainian separatists to whither on the vine? Or, like in Crimea, will Russian tanks cross into Ukraine and raise the stakes even higher for Europe and the United States?

I guess Hillary’s plan is to have Kerry make her look good.

We should buy Poland’s fruit, since California is withering. I don’t care from whither my fruit comes, and don’t mind supporting Poland as much as Californica. Or maybe Poland could send us their fruit, and we give them the missile defense systems.

Putin’s economic pocketbook is better served by annexing the Crimea.

You are being sarcastic, right? Crimea is a dead weight on Russian economy. They are thinking about opening casinos there, and I’m sure eventually tourism will pick up, but I seriously doubt Putin can turn it around.
Ironically, the best way to economically deprive Russia is to get them to modernize East Ukrainian industry.

Sorry accidental downtick . (I never downtick -after all a comment is only that .if I can find a kink in the logic or error I reply why )

There is going to be war for markets for every commodity & every product . The only category for this modernised east Uke industry is to be a colony for Germany . ( which of course was the aim in the first place before Nuland stepped in & took over ) .

Interestingly , Turkey is wanting to join the common import block of a Russia Byelorusse ,, Kazakh , Armenia . They have been rebuffed by the EU for 20 years whilst pauper gypsy tribes have been let in .

As to The Crimea , China is moving in . They want to build the bridge to Russia & set up shop on land .They’ve done this in East Africa & Madagascar . A few infrastructures & a few ‘ business zones’ & residences & wham – There they are!

There are worse fates in the world than being a German colony.

Just lightly OT , yesterday the post re The Black Boxes .

What disturbs me is not the findings that will come for we have coved most of the possibilities on LI but the suspension of logic .

It was a statement by the Ukrainian government not the official body set up in the Netherlands to put together the iNvestigation. ( Ukraine had handed over its authority) .Nor was it the official findings from the technical experts in Britain ( who don’t make statements ) . Nor was it from the legal owners of the black boxes – Malaysian Airlines.( to whom they were handed over & who placed them with the British team) . Even the manufacturers would have precedence on the info Chanel than the Ukrainians . It was taken as proof enough by all .

The first reports are due at the end of next week according to the Dutch .

I have a little bit of experience on these heavily political air crashes . I cannot name the person but I. Knew one of the organisers of the official ‘on e Ground Team ‘ at Lockerbie . What has happened to our objectivity – we have evidence of the effect of airline explosion . Why are we thinking this should be easily solved”? It took 8 years for the Iranian airliner , similar for Lockerbie which really is still not a certainty. The hasty release of Mahgrebi just before his new appeal was facilitated by Pgordon Brown even though the Scots took the fall . This we know now , as Libya falls apart again.

I have to add, Poroshenko is suing for peace, right? But he’s winning, so why is that? Well, because, although “Ukrainian” “army” is winning (lets not talk about how and lets not talk about the possibility of the Northern Ireland scenario)), they are having difficulties completing the 3rd rotation with anti-draft demonstrations in the west of the country turning violent. According to Russian news sources, Ukrainian soldiers are deserting. 2/3 of Lviv recruits don’t make it to Donetsk. Everything they say should probably be divided by 3, but still…
Did you know that Ukraine is now a non-NATO ally of the United States? What are we on the hook for?

I had a look at Lviv landscape / hostels / cityscape . it looks very UN Ukrainian .

I went in with only a vague idea of the place & on seeing the pics , I immediately said old Jewish Town.

Of course I was right . Lviv is cursed & no good can come of it .