…oops? Really bad optics of how campaign sausage is made. 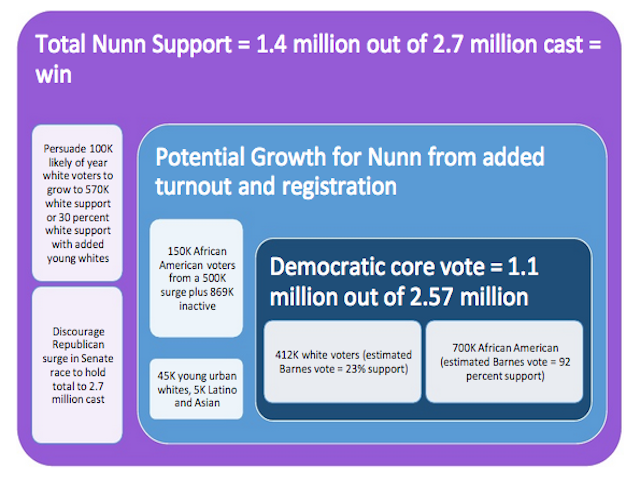 Every campaign makes strategic mistakes, but it’s not often that a high profile campaign’s biggest mistake is that it publishes its own “eyes only” strategy plan.

National Review reported today that back in December, Michelle Nunn’s campaign made the mistake of publicly posting on the internet their comprehensive campaign strategy for the 2014 midterms. Nunn, who is Georgia Democrats’ best hope for recovering the Senate seat vacated by Saxby Chambliss, is now facing criticism over strategies revealed as a result of the blunder. Via National Review:

The documents reveal the campaign’s most sensitive calculations. Much of the strategizing in the Georgia contest, as is typical in southern politics, revolves around race. But the Nunn memos are incredibly unguarded. One is from Diane Feldman, a Democratic pollster and strategist who counts among her clients Minnesota senator Al Franken, South Carolina representative James Clyburn, and former Los Angeles mayor Antonio Villaraigosa. Feldman, who did not return calls seeking comment, is frank in her characterization of the demographic groups — Jews, Asians, African Americans, Latinos, and gays — that are essential to a Democratic victory. The Nunn campaign declined to comment about the document on the record.

As a rule, campaign strategists break down voters (and donors) into their various demographic groups as a way of gauging which groups need more attention. Although Americans tend to accept the idea that candidates target messages to voters based on race, or ability to donate, the contents of this memo will undoubtedly shine light on the fact that even “color blind” Democrats are keenly aware of the political differences separating voter demographics.

National Review notes the attention paid to potential voters and donors in the Jewish community. The consultants and strategists who contributed to the leaked memo noted that Nunn’s position on the current crisis in Israel would largely determine how Jewish voters would behave on Election Day. As of the publication of the memo, Nunn’s campaign team had no messaging plan on the issue, and her campaign website does not mention Israel.

Nunn’s team did not hesitate to make recommendations on outreach strategy based on various demographic groups’ donor potential.

Asians are also identified as key fundraisers. The community is described as “very tight,” one in which people work to “become citizens quickly.” Nunn’s strategists also say there is a “huge opportunity” to raise money from gays, bisexuals, and transgender individuals, who are described as having “substantial resources.”
…
As southern whites have moved to the right, Democrats have been forced to cobble together a coalition of minority voters. Feldman recommends as a goal winning just 30 percent of the white vote while working to increase turnout among African Americans and Latinos. So while Jews, Asians, and gays are characterized as potential “fundraisers,” African Americans and Hispanics are the ones the campaign needs to get to the polls in historic numbers, the document makes clear.

Although most campaigns do tend to target their messaging toward groups that show interest in building relationships and becoming more involved with the candidate, this frank breakdown of who Nunn should target based on ability to donate substantial amounts of money could prove disastrous for the campaign, especially in areas (such as rural Georgia) where voters don’t feel like they can connect with Nunn.

According to the Real Clear Politics Average, Nunn is polling at a slight disadvantage to David Perdue, the Republican nominee. With such a small margin separating the two candidates, the field is wide open for Perdue’s campaign to exploit Nunn’s vulnerabilities–especially with regards to Israel–so conveniently laid out in the now-public memo.

Also working against Nunn is her lack of commitment to a policy plan, and her tendency to dodge questions on controversial issues like Obamacare. Although voters and grassroots activists are sure to hold her accountable, her campaign has worked hard to secure the support of the mainstream media:

Her strategists are optimistic that the media won’t prove much of an obstacle. They write that at some point her opponent, who at the time the document was written had yet to be determined, will be “shoveling research” against her. But they say they anticipate they will often have “fair warning” about negative news stories and can work to “kill or muddy” them.

Unfortunately for the Nunn campaign, the whole of the internet is now fully aware of those intense vulnerabilities they were so concerned about covering up. It’s now up to the media and conservative organizations to cover them.

You can read the full campaign memo here.

Hopefully the Democratic party won’t be counting on the Jewish vote any more.

Ditto. They need to get over their childhood WWII brainwashing, the union thing, and FDR already.

and yet they won’t…

at least not the lieberal jews i know here in Lost Angels.

Did this come from that web site also? The keep referreing to the leaked Nunn campaign documents….

“On Nunn’s watch, the Points of Light Foundation has given a total of over $33,000 to Islamic Relief USA, a charity that says its goal is alleviating “hunger, illiteracy, and diseases worldwide.” Islamic Relief USA is part of a network of charities that operates under the umbrella of Islamic Relief Worldwide: On its website, it says that it is a legally separate entity from its parent organization, but that they share a “vision, mission, and family identity.”

What does that matter? Because Islamic Relief Worldwide has close ties to Hamas, which the U.S. and many other Western countries have designated as a terrorist organization.

I liked this bit:

Well now. If the shoe were on the other foot, there’d be outraged cries of “vote suppression! from all corners of the Democrat media machine.

Exactly! I am a new GA resident, having relocated from liberal New England. It’s great to live in a RED state.

I feel suppressed by her comments. Can I sue? Do you think Rev’run Al and Jesse will come down to support me?

No – but that should not matter:).

“…added turnout and registration” is code for voter fraud.

So, you’re saying that Southern Democrats have a “codebook” ?

You betcha it is!

“It’s now up to the media and conservative organizations to cover them.”

The media…?
Was that an attempt at humor…?

A sneak test to see who is paying attention. 🙂

Man, they just can’t put down that race card, can they?

Are racial groups really that monolithic? The fact that Barry-O is living in the White House would tend to disprove this.

Barack Obama has done more damage to relations between the races than all the slaveholders put together.

Are racial groups really that monolithic?

According to the Collectivist Democrats, yes. Any individual who is not part of that monolith is suffering from “false consciousness” and needs to be “educated”.

Obama’s behavior during his presidency and that of his Attorney General, Holder, have set race relations back. Not just because of the blatant suppression of whites…but also because many (a bridge too far to say ‘all’) now have an even greater detrimental sense of entitlement and victimhood. It’s not going to go away anytime soon because once people are geared toward ‘getting’ – they’re not going to be ‘giving’ up – anything.

LOL – the very group that voted for 0bama at a 95+% clip – blacks – will be splitting the entitlement pie with the ‘new’ crop of illegal hispanic invaders – oh the irony. As Margaret Thatcher famously noted, there is only so much of other peoples money to go around.

I doubt, and admit to being very cynical, that “Nunn” voters will read about her strategy and if they do will understand the ugliness of it, and if they understand, will care.

Voting for country instead of party, race or gender? Not important for most. I wish I believed differently but I cannot see what I see and do that.

Another lefty political cipher. Like Obamacare, they’ll have to elect her to find out what’s in her.

Many Obama voters will continue to vote Democratic because they have been trained to do so by their givernment – and that is NOT a typo! They don’t understand that the D’s are the party of the KKK, the party that passed laws disallowing blacks firearms ownership, the party that worked to keep slavery alive.

As long as they can still get their Obamaphones, Visions cards, and all the other goodies that WE are paying for (some still think BHO is paying for all this out of his OWN money!), they’ll keep voting for us to pay for their “freebies”! I wonder what will happen when we refuse to do that anymore?