While visiting the NYSE to ring the closing bell Wednesday, Medal of Honor recipient Ryan Pitts seemed surprised as he then accidentally broke the gavel. 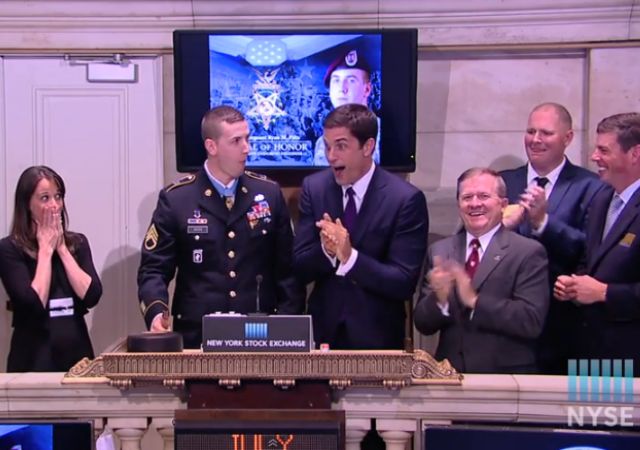 Former Army staff sergeant Ryan Pitts was awarded the Medal of Honor on Monday. In a White House ceremony, President Obama commended Pitts for “the humility and the loyalty that define America’s men and women in uniform.”

Pitts helped defend his outpost in July 2008 as it came under attack from insurgents in eastern Afghanistan in the battle of Wanat. Here is an excerpt describing the events of that evening, from the NY Times:

Mr. Pitts was staffing his outpost when the sounds of enemy fire pierced the July night. Four of his fellow soldiers quickly died and nearly all the others were wounded.

Shrapnel had shattered both of Mr. Pitts’s legs, but he managed to pull himself onto his knees to take position on a machine gun. The insurgents returned fire with mortars and rocket-propelled grenades, pounding the outpost and killing four more Americans. By this point, Mr. Pitts was the sole remaining soldier alive at Observation Post Topside.

Mr. Pitts crawled to the radio and whispered a need for reinforcements to the company commander. Mr. Pitts, who was 22 and thought he was going to die, “prepared to make a last stand,” Mr. Obama said.

“As the insurgents moved in, Ryan picked up a grenade, pulled the pin and held that live grenade — for a moment, then another, then another — finally hurling it so they couldn’t throw it back,” the president said. “And he did that again. And he did it again.”

Mr. Pitts fought off the enemy fire just long enough for four more Americans to arrive at the post. One of those men became the ninth casualty.

On Wednesday, Pitts visited the New York Stock Exchange to ring the closing bell. And as he hit the gavel to close out the day, Pitts seemed surprised by his own strength when the gavel suddenly broke, leaving the former US Army paratrooper holding nothing more than the handle.

But all was good – the crowd cheered and laughed, and surely it will be a moment that he and others will remember with a smile. Watch it on video below, from the NYSE.

But it breaks my heart that nine of your brothers died. I’m wiping the tears as I write this.

A real bang for your buck!

Brave Army staff sergeant Ryan Pitts is the real return on courageous investment in this country. May God bless him with good health.

Thank you Army staff sergeant Ryan Pitts for your service.

They need to get the military grade M1A2 OD Green assault gavel. It’s much tougher.

Yes, but it costs $85,000 and requires theater-level support to keep it working.

Gavel made in Detroit by Union workers?

Americans’ “honoring” of veterans is what Bonhoeffer called “cheap grace,” meaning, in this case, “no skin in the game.” Less than 1% of Americans bear the burden of protecting the other 99+%. “Thanks” is cheap because you guys have no risk. And despicable usury by Wall Street/White House. Vomit. http://magazine.nd.edu/news/49015/