Just not a priority anymore to those who decide what gets reported. 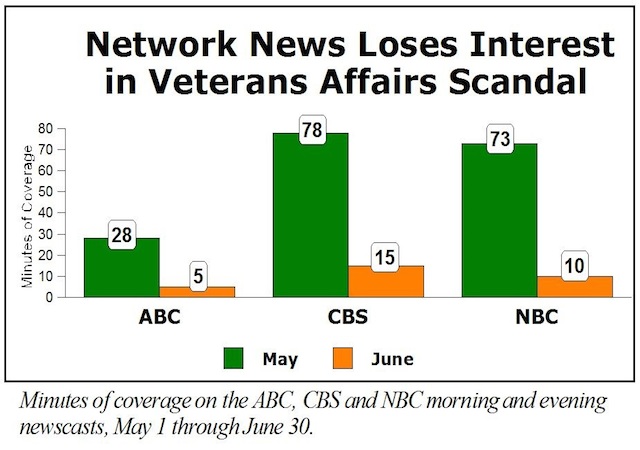 This past April, a whistleblower at the VA Medical Center in Phoenix revealed to the world that agency officials were falsifying their wait lists in exchange for bigger bonuses and the appearance of efficiency. The scandal gave birth to a flurry of media activity, and journalists, politicians, and the public joined together in their demand for answers–how could this have happened to the people who risk everything to protect us?

That outcry was short lived.

According to a report by the Media Research Center, the mainstream media has drastically cut back on how much screen time they’re devoting to the ongoing crisis at the VA:

The coverage of this scandal, involving at least 40 veterans who died while awaiting care, has been problematic from the start. The story broke on April 23, but the networks didn’t get around to it until 13 days later, May 6. But the 180 minutes of coverage in May faded substantially in June.

This pattern follows the waning interest in the Internal Revenue Service targeting of conservative groups. In May of 2013, ABC, CBS and NBC devoted 52 stories the first week. That plummeted to seven by week three and just one by week five. Over the next ten months, the networks managed just 14 more stories, ignoring the damning developments.

So, what did the mainstream media deem more important than veterans dying due to lack of medical care? The OJ Simpson trial, and the opening of the world’s largest water slide, apparently.

It would be unfair to blame the mainstream media for the American public’s ongoing “scandal fatigue” and growing indifference to political scandals; this, however, feels different. The story is still developing. Or, is it?

Perhaps in a sign of things to come, the month ended with only the NBC Nightly News reporting on the nomination of Robert McDonald to be the new Secretary of Veterans Affairs. On June 30, anchor Brian Williams only allowed meager 22 seconds on how this impacted the future of the VA.

The Obama Administration’s problem with this scandal, and thus the mainstream media’s problem, is that it affects both sides of the aisle. The left realizes how risky it is to attempt to put veterans in a box and turn this into a purely “Republican” problem, and the mainstream media is acting accordingly by ignoring it as opposed to reporting on it.

Progressives know that losing the empathy of the public over a scandal involving veterans would be fatal. What’s troubling is the media’s willingness to go to great lengths to embrace the Administration’s incompetence and cowardice.

I came to understand the Cult of Obama through this article. Obama represents, to the left (of which the MSM is a HUGE part), a means of taking out the United States, of taking out the Christian-Judeo ethos that binds it together and of taking out, in a wider sense Western Civ.

The MacGuffinization of American Politics

Watching Chris Matthews [consider CM simply a stand-in for the left generally] interview Obama, I was struck by just how uninterested in policy questions Matthews (and his panel) were, and how almost every question seemed to be, at heart, about Obama’s emotional response to difficulties– not about policy itself, but about Obama’s Hero’s Journey in navigating the plot of President Barack Obama: The Movie.

As with a MacGuffin in the movie, only the Hero’s emotional response to the MacGuffin matters.

Again and again, Matthews and his panel focused not on weighty questions of state, but on what toll these important-sounding MacGuffins took upon the Star of the Picture, Barack Obama.

Matthews was not terribly interested in hearing about the problems with Obamacare, or how Obama planned to address them.

But he was very interested in learning how Obama was coping with the challenges.

Matthews didn’t care all that much about disputes over the budget. But he was keenly interested in Obama’s thoughts on his opponents in such struggles.

07/02/2014
Here in Town –the East Valley Tribune is quite, Gannett/The Arizona Republic —is doing their best–considering all points, CNN is quite, and the other super-controlled stations are quite as the NY AG flags an old story that lead to the Vampires of Charities.

Now it gets a little more interesting—finding out those in charge are out there partying with our cash—don’t be surprised. The old saying—“follow the money”—- it is what it is!
I call it, a GIANT SKIM, as the murders go covered up here in Phoenix and all the Politicians Local/State/and Federal are closed-lipped even though they are sitting on a 650 book on the history of the VA,—and now there is a 250 page Book on the Month of June—called, “The Tag”; and another book called, “The Aftermath” of the Explosion —–as we can see—your article Amy Miller will go down in History. Thanks for the great Journalism! The Arizona Republic got to the GAO reports back in 2005—that is a good start but I would review the 1989 video on C-Span. Again thank you Amy for the work put into to this article.

This scandal will be like most of the rest in the Obama Mis-Administration. In another six months the dust will have settled and people have forgotten. Everyone can go back to watching ‘Dancing With The Stars’.

For decades our young men defended the rights for everyone in our Nation. One of those rights, paramount to none, is the existence of our First Amendment rights. Those First Amendment rights are used by the media more than the “People” themselves. We have come to a juncture, where those that use those First Amendment rights for profit, are now abandoning the very individuals that have put themselves in the line of fire to protect that right among other rights regardless of political party.
The media are abandoning us just as certain as the Veterans Affairs has been found to abandon us on this critical issue as we know the VA hospitals are not the only challenges veterans face at the VA. Freedom of Speech is not a God given right but rather a right exercised here in the United States of America, more than any other industrial nation, because of the high costs paid by the only true minority left in our Nation. Throughout our Nation’s history only about one percent have worn our uniform with the highest percentage serving during in WWII (the exception being the Civil War). Our military now consist of less than one half of one percent of our population.

Yes, we no longer have the public strength for our cause to be pursued by the media without risking their alienation by political parties, yet we risked and all too often gave our lives. We have come home physically and mentally wounded but walked the path many would or could not. We have been abandoned by the media just as certain as our “12th Man” (our Nation’s public) abandoned us Vietnam soldiers.

Now our Nation’s “12th Man” is supportive of the protectors of our rights and safety. Now it seems we have lost our voices, which appear to be censured by those who profit most from our First Amendment right, the media.

May our veterans forgive the media executives and personnel as we have our “12th Man” during the Vietnam war, as after 40 years, we now know how our Vietnam era “12th Man” must be judging themselves, as these media personnel may judge themselves in the future for abandoning our cause this day.

That the networks are talking less about the VA scandal this month is not necessarily an indictment of the news coverage. They only have so many minutes and the news lately has been on other things: Iraq, Ukraine, the IRS scandal — oh, right, the networks are barely covering those as well.

Now that Team USA is out of the World Cup perhaps there will be a minute or two for the news in the broadcasts?

As I said at the time, allowing Shinseki to be made the scapegoat for a corrupt and failed system would mean the end of media scrutiny.

New Director named, scandal over. Back to “business as usual” at the VA – maybe no more bonuses paid for phony numbers, but no recriminations, seizures, or criminal charges for four years of falsifying data for cash.

“[A]llowing Shinseki to be made the scapegoat for a corrupt and failed system would mean the end of media scrutiny.”

This comment is precisely why, after the “Fast & Furious” scandal under AG Holder, when many in Congress were calling and/or petitioning for his dismissal, a lot of us were screaming, “NO!”

It leaves questions unanswered, but everyone – media and individuals – lose interest; everyone, of course, except those of us who want answers.

Besides which, “dismissed” or “resigned” does not equate to “held accountable.” In the VA scandal, 40 cases of veterans dying while awaiting medical care have been reported and confirmed – there’s no telling how many actually have died awaiting care, and I suspect the actual number is much higher. 40+ deaths, and someone resigned. That’s not good enough; someone should be in prison.

Not just resigned, but also presumably receiving a pension afterwards. You see it all the time in government, where people are allowed to resign rather than get fired so they can preserve pension and health benefits.