Lois Lerner can spell, but she’s still an …

Lois Lerner can spell, but she’s still an … 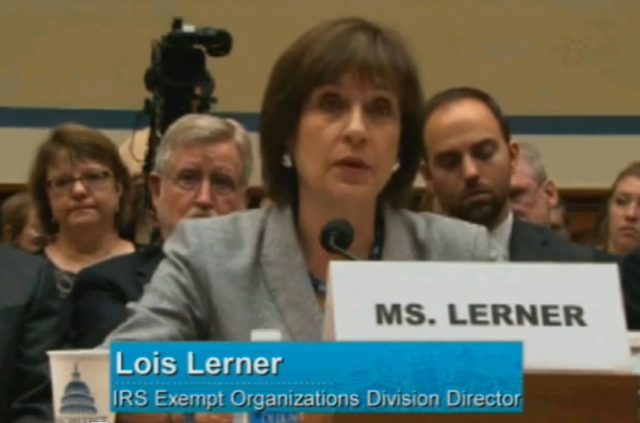 The November 9, 2012 email exchange with an unnamed colleague – the person’s name was redacted in the copy Camp’s staff released publicly – took place while Lerner was in the United Kingdom.

‘Overheard some ladies talking about American[s] today,’ Lerner wrote. ‘According to them we’ve bankrupted ourselves and a[re] through. We’ll never be able to pay off our debt and are going down the tubes.’

‘Well, you should hear the whacko wing of the GOP,’ the person replied. ‘The US is through; too many foreigners sucking the teat; time to hunker down, buy ammo and food, and prepare for the end.’

‘The right wing radio shows are scary to listen to.’

‘Great,’ Lerner wrote back. ‘Maybe we are through if there are that many a**holes.’

‘And I’m talking about the hosts of the shows,’ came the reply. ‘The callers are rabid.’

In the final message of the exchange, Lerner wrote that ‘we don’t need to worry about [illegal] alien terrorists. It’s our own crazies that will take us down.’

“This email shows that Ms. Lerner’s mistreatment of conservative groups was driven by her personal hostility toward conservatives,” Camp wrote in a letter to Attorney General Eric Holder. ”This new evidence clearly demonstrates why Ms. Lerner not only targeted conservatives, but denied such groups their rights to due process and equal protection under the law.”

Camp’s letter recounted that his committee has found that Lerner personally directed the IRS to audit Crossroads GPS, the group run by Karl Rove, and hinted at seeking a job with Organizing For Action, the group aimed at helping to re-elect President Barack Obama.

Camp said all of this evidence combined shows that a special counsel is needed to investigate the IRS and Lois Lerner, who has refused to testify before Congress by pleading the Fifth Amendment.

Conservatives on Twitter made the point that the “missing emails” and “scratched hard drive” now seem more explainable.

Reading those Lerner emails, I can't imagine how her hard drives got accidently deleted…

American exceptionalism. Three things rise to the top – cream, oil, and excrement. Only one of those three rolls down from the top.

“It’s our own crazies that will take us down.”

She’s right. She just mis-identified who the crazies are.

Of all our agencies, the IRS is one of the most important to apply equal protection under the law to our citizens. Otherwise, our precious voluntary compliance with the tax laws That compliance truly is precious, because the cost of compliance on an unwilling populace gets into the prohibitive range very quickly.

I’d note this and stay focused on the organizational conspiracy leading back to the White House.

Don’t reduce it to one person’s animus.

We all know that Obama refused to stop using his personal Blackberry phone, and refused to use the required FBI issued, secured cell phone!

Don’t you know the Chinese and Russians have hacked into that personal Blackberry like crazy!

Remember, this is the woman who was angling for a senior position at Organizing for America shortly before everything blew up. Imagine what she could have done there…

Lerner IS an IRS conspiracist who apparently holds a deep seated hatred of conservative groups. In letting her hatred be known she involved coconspirators at many levels with her conversations and emails.

The evidence of her misconduct which, once finally revealed, Rep. Cummings, is not based on hearsay or from a partisan witch hunt.

In fact, Lerner’s discrimination and decision making bias are detailed verbatim! You can read it for yourself Rep. Cummings in between your partisan theatrics.

Rep Elijah Cummings, are you taking note of all of this? And, are you complicit in any of this?

If you’re a government hack whose entire livelihood comes from being firmly attached to the govt teat, why WOULDN’T you despise fiscal conservatives?

NBC Nightly News finally got around to mentioning Lois Lerner again tonight. Guess they figured they had no choice, so they didn’t try to sugar-coat the emails, but they just couldn’t let it go through without an attempt to protect Obama, closing the segment with the ‘news’ that no evidence linking the scandal to the White House has been found.

It was suspected some time ago that Lerner is a “true believer,” hired knowing that she’d put the screws to conservatives without requiring explicit orders to do so. This is exactly why true believers are hired – to insulate the leadership from their machinations because they act autonomously and exactly as if they had been directed to do that which the leadership dare not order.

Exactly. “Will no one rid me of this troublesome priest?”

Good luck with that. Holder will no more investigate Lerner than he will investigate any other example of Federal corruption, like the EPA’s lost emails.

Well I think we have solid proof for motive now.