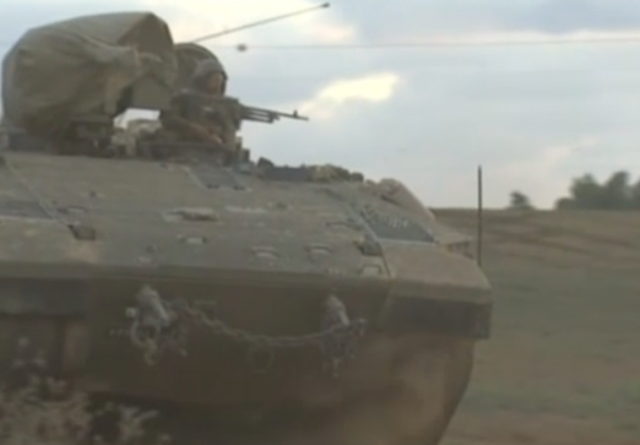 This is night two of the ground invasion of Gaza.

It does not appear to have moved into the large Gaza City, yet. The focus has been on uncovering tunnels, of which many have been found.

(added) Overnight there was another tunnel attack where Hamas terrorists emerged on the Israeli side of the border and were confronted. Two Israeli soldiers were killed.

Also, Hamas sent a donkey loaded with explosives towards Israeli soldiers — the animal exploded without causing Israeli casualties. More details on all of these below.

Destroyed house of the Israeli civilian killed by a Hamas rocket today pic.twitter.com/dtgVfdnrku

A short time ago, 2 Hamas terrorists fired at IDF soldiers in S. Gaza. We returned fire and killed the attackers. No harm to our forces.

Hamas' social media rules: "Anyone killed or martyred is to be called a civilian from Gaza" http://t.co/gex2P45r9f

Watch: The IDF prepares to target a terrorist, but calls off the strike after watching him enter an ambulance http://t.co/2mg7Jqm1YO

Photos from the field: More tunnels that we uncovered today in the southern Gaza Strip pic.twitter.com/88EdeojVNF

should’ve smoked him before he hid in an ambulance #PaleoCoward

when i saw the enemy playing ‘Dare Ya’ games i would have hit that ambulance with a missile so fast . Then send them a postcard ‘I’ve seen that game before !’
yes , i know UN would cry & whine .

Time to give them 48 hour notice, then turn the area into glass.

If one posits that Hamas is seeking to invite “atrocities” as it has in the past by using tactical necessity, that is, the war crime of placing weapons and weapons fire among civilian and UN observers, then the logical expectation is that there are tunnels and serious weapons caches located in the most densely populated areas. We already know they like to use hospitals as headquarters. Cleaning up this mess could be slow, especially if the IDF continues to attempt to clear civilians from the immediate areas.

God bless the IDF, and God bless Israel. These people have acted with far more care for the safety of alleged civilians than I would. These people are adhering to a higher moral standard than mine.