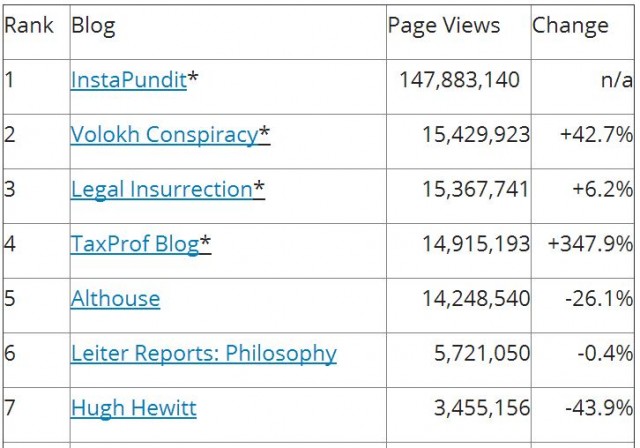 TaxProf has released the rankings of blogs run by law professors, for the 12 months ending June 30, 2014.

Go to Law Prof Blog Traffic Rankings for the full list, including percentage changes from the prior year.  The Top 7 are in the featured image.  [Note 10:25 a.m. – after our publication, TaxProf issued revised numbers based upon additional Washington Post data for Volokh Conspiracy. The current Featured Image now reflects the change.]

Plus College Insurrection comes in at #21, a drop of two places even though traffic was up from the prior ranking period:

The asterisks reflect that the numbers are generated from the reliable Google Analytics, as opposed to Sitemeter, as to which some websites had reliability problems.

Be forewarned — next Quarter’s annual rankings will not look so good for us, as traffic has been slow the past few months.

Wow! That TaxProf blog is really burning up the charts…!!!

We gotta take out Instapundit. Is that a non-profit?

Someone once commented on my blog:

“It’s hard to find your articles in google. I found it on 22 spot,
you should build quality backlinks , it will help you to get more visitors.
…just search in google – k2 seo tricks.”

So, I need “quality backlinks” and no doubt a whole lot more than that.

LI, on the other hand, sans the egregious word “TAX” IS the bee’s knees!

Congratulations! It is well deserved (both for this site and College Insurrection).

Congratulations and kudos to the max Professor. You run just about the best law blog around.

Thank you for all of your good work.

I tried to ask the Law Prof Blog traffic ratings site these questions and can’t get access:

If anyone has access to the site and/or can answer these questions I’d appreciate it.

(Here answering Henry Hawkins’ battle cry to “knock off InstaPundit!!!” Or at least the low hanging fruit of Volokh….