Kerry and the illusory “peace plan”

Kerry and the illusory “peace plan”

It’s extraordinary to think that this man is our Secretary of State. 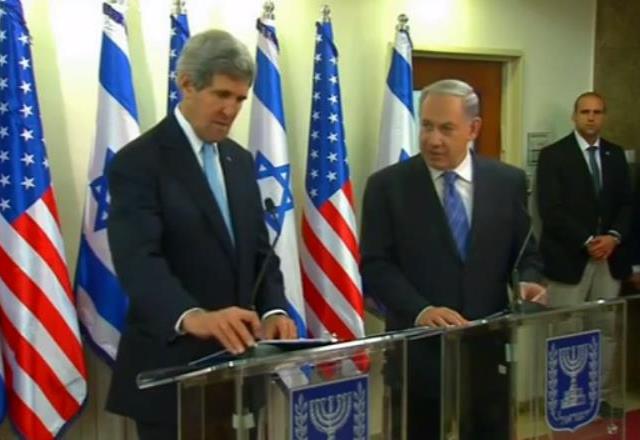 There’s a long, long article appearing in TNR that professes to be “The Explosive, Inside Story of How John Kerry Built an Israel-Palestine Peace Plan—and Watched It Crumble.” It’s worth reading, but perhaps not for the reasons the authors intended.

The problem with the article and so many other treatments of the subject is that its premise is that there is a peace plan that can be built and that can crumble—and that someone like John Kerry has the smarts to do it, if it were possible to do it. But the whole thing is a chimera at this point.

The piece’s conclusion contains a more realistic appraisal of the situation, from Avi Dichter, former head of Israel’s Shin Bet:

The American effort will always be multiplied by the amount of trust between the two leaders. So if Kerry’s pressure represents the number five, and then Obama’s help brings the number to ten, it really doesn’t matter. You’re still multiplying it by zero. The final result will always be zero.

The amount of trust—or distrust—between the two leaders reflects the amount of distrust between the two countries and their peoples. Peace plans sometimes have been entered into by these two groups (or Israel and other Palestinian groups) for temporary tactical reasons, but that’s about it. The Palestinian government does not recognize Israel’s right to exist and Hamas is a terrorist group dedicated to its destruction. But for various reasons both have become the darlings of Europe and the Left, and that helps tie Israel’s hands to a certain extent. But “partners for peace” they ain’t.

As for Kerry, long before Obama became well-known as a narcissistic leftist and a self-serving liar, those terms described Kerry very well. Here’s a passage from the article that tells you a lot about the man:

[Netanyahu] opened the meeting by playing Kerry a video on one of his favorite topics: Palestinian incitement. It showed Palestinian children in Gaza being taught to glorify martyrdom and seek Israel’s destruction. “This is the true obstacle to peace,” Netanyahu told Kerry.

“It’s a major issue,” Kerry replied. “And nothing justifies incitement. I hate it. I’ve read Abbas the riot act about it. You know I have. But it is worthwhile to try to understand what life looks like from the Palestinian point of view.”

“This has nothing to do with the occupation and the settlements,” said Netanyahu.

Kerry pressed on: “When I fought in Vietnam, I used to look at the faces of the local population and the looks they gave us. I’ll never forget it. It gave me clarity that we saw the situation in completely different ways.”

Kerry went on to add that the situation in Israel “can’t be solved if you can’t see it how they see it.”

This is beyond inane on Kerry’s part. Who cares whether Kerry “hates” incitement, or whether he’s “read Abbas the riot act” about it? Certainly not Abbas. But that’s the way a narcissist like Kerry talks.

What’s more, understanding the Palestinians won’t help or change a single thing, and it’s a travesty that Kerry is saying that it will. One wonders whether he says that to the Palestinians about the Israelis, too; but even if he were to say it, it would be an equally useless statement. Understanding what the Palestinians want, and what they might stand to gain and lose from negotiating or failing to do so, and then what pressure can be brought to bear on them, is much more to the point.

Kerry was in Vietnam for barely four months over forty years ago and went home early, and his time there was spent on a Swift Boat. How many South Vietnamese did he get to encounter, and under what circumstances? And how could he possibly have a clue what they were really thinking when they looked at him (except for the ones he was shooting at), or why, or whether they “saw the situation in completely different ways” from him? How about the ones who fled the country after we left, or those who were killed or re-educated; how did they “see the situation”?

Kerry has long been fond of making sweeping pronouncements on what the South Vietnamese people wanted and didn’t want, and how they “saw the situation.” Perhaps he was a mind reader then, just as he’s a mind reader now. According to his 1971 Senate testimony on the subject, here’s what they thought:

We found most people didn’t even know the difference between communism and democracy. They only wanted to work in rice paddies without helicopters strafing them and bombs with napalm burning their villages and tearing their country apart…

So that when we in fact state, let us say, that we will have a ceasefire or have a coalition government, most of the 2 million men you often hear quoted under arms, most of whom are regional popular reconnaissance forces, which is to say militia, and a very poor militia at that, will simply lay down their arms, if they haven’t done so already, and not fight. And I think you will find they will respond to whatever government evolves which answers their needs, and those needs quite simply are to be fed, to bury their dead in plots where their ancestors lived, to be allowed to extend their culture, to try and exist as human beings. And I think that is what will happen…

I think that politically, historically, the one thing that people try to do, that society is structured on as a whole, is an attempt to satisfy their felt needs, and you can satisfy those needs with almost any kind of political structure, giving it one name or the other. In this name it is democratic; in others it is communism; in others it is benevolent dictatorship. As long as those needs are satisfied, that structure will exist.

It’s extraordinary to think that this man is our Secretary of State.

its been what, well over 40 years now?
at what point do people give up on “peace plans?”
israel needs to stop caring about them and settle the threats once and for all.

Peace plans, did they say that?

Piece plans…
is what I thought they said.

you make some excellent points about how Kerry is clueless regarding the Vietnamese, let alone about the Palestinians.

Just like they came to the USA, the Vietnamese did take a dangerous journey to Australia. They fled by whatever means they could flee. Over the years I have come to know many of these Vietnamese families that fled from Vietnam when we pulled out. THEY DID NOT WANT TO LIVE UNDER COMMUNISM. They feared the Communists.

As it turns out, I live in a parish where we have had the pleasure of having some seminarians come to stay for a short time. I had the pleasure of getting to know Br. Vincent, a young seminarian from Vietnam. His testimony is at variance to what Kerry said, not because he lived through the war but because he attested to what came afterwards. The Communist government persecutes Christians, especially the Catholic priests. The very first homily given by Br Vincent was in fact a testimony to torture and deprivations that many suffered under the Communist regime. It is the reality of Vietnam that has lasted for a long time after the war ended.

John Kerry is an embarrassment to the entire human race.

A professional glory hound, he put himself in for Purple Hearts for minor injuries (one required a Band-Aid, the other no treatment at all) when his superiors refused to. Then he got rich – twice – by marrying wealthy widows – twice.

And those are the high points of his life.

“This has nothing to do with the occupation and the settlements,” said Netanyahu.

Kerry pressed on: “When I fought in Vietnam, I used to look at the faces of the local population and the looks they gave us. I’ll never forget it. It gave me clarity that we saw the situation in completely different ways.”

Kerry went on to add that the situation in Israel “can’t be solved if you can’t see it how they see it.”

This explains so well why John Kerry can’t ever negotiate, especially with the Israelis and Palestinians.

In fact, he will NEVER be able to see Israel’s viewpoint. He is that dense, that sold-out to his ideology. Plus, as he reveals in his self-focused navel-gazing comment about Vietnam, he can’t see the the truth about the United States, and who we are and have been since our founding; his warped, hate-America view is all he can see…….

How horrifying that he is our Secretary of State. And that most of the US Senate voted to put him there. *facepalm*

I would still like to know how a self-confessed war criminal managed to be confirmed as Secretary of State. You’d think a “little detail” such as that would be a disqualifier!

Hypothetically, Kerry may be right here: ‘the situation in Israel “can’t be solved if you can’t see it how they see it.”’

If the Israelis regarded the “palestinians” with the same blind, irrational, racist hatred and savagery, they would eradicate all the Gazans. Then there would be peace in Gaza.

Reality intrudes. The Israelis are a fundamentally moral people, not given over totally to their lower natures. It is impossible for a moral people, who nonetheless are not without sin, to have the view of racist, hate-filled, truly evil savages.

The American effort will always be multiplied by the amount of trust between the two leaders. So if Kerry’s pressure represents the number five, and then Obama’s help brings the number to ten, it really doesn’t matter. You’re still multiplying it by zero. The final result will always be zero.

I find this very profound – especially applied to the “trust factor” between Arab Palestinian’s leaders and Israel’s leaders. The Arab Palestinians will NEVER “trust” Israel, or acquiesce; they will never accept Israel as a nation with a right to exist – unless FORCED to do so. So, their multiplier will always be zero.

Because of the Arab Palestinian zero multiplier, “…the final result will always be zero.”

I wonder how many world leaders care what Kerry or Obama have to say. Also, have there been any Obama appointees who have achieved anything in a positive way? Anyone?