Illegal and unafraid in D.C.

Illegal and unafraid in D.C. 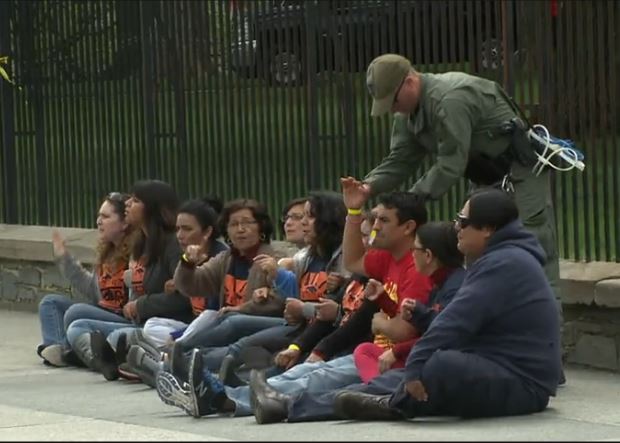 Illegal immigrant activists in America would like you to know that they’re not terribly concerned about being arrested and deported.

In fact, they’re so unconcerned that they decided to stand in front of the White House this Monday and demand that the Administration offer a reprieve for parents who have illegally entered the U.S. with their children.

This isn’t the first protest of its kind, and it certainly won’t be the last.

The Obama Administration has defined its participation in immigration enforcement by the deliberate dismantling of existing enforcement mechanisms via Executive Order. Starting in 2009, President Obama began bypassing Congress to create the environment that makes today’s protests possible.

An Immigration and Customs Enforcement official indicated that even if the protesters end up getting arrested by D.C. police, they’d have to be serious criminals for ICE to get involved.

“Unless the individuals meet ICE’s enforcement priorities, it’s unlikely that the agency would get involved in the case,” the official told FoxNews.com.

Under a policy that’s been in effect for several years, ICE focuses deportation mostly on serious criminals and – in some cases — those caught in the act of crossing the border. The agency prioritizes deportation for felons, repeat offenders, gang members and others with a serious criminal record. But the agency largely gives a pass to other undocumented residents.

The problem with this philosophy of non-enforcement is that it breeds optimism in the thousands of people who illegally cross our border.

James Carafano at the Heritage Foundation recently articulated what Republican legislators, foreign leaders, and even residents of border states have been saying for months: our illegal immigration problem is Barack Obama’s problem:

Why the dramatic upsurge? It comes following the president’s 2012 declaration that his administration would defer, virtually automatically, deportation of minors unlawfully present in the U.S. Over the last year, “coyotes” have been using that promise as a marketing tool for their people smuggling business. Coupling this announcement with disastrous policies towards El Salvador, Honduras, and Guatemala — the three countries from which most of these children come — Obama has done much to undermine all the enforcement measures that had stemmed the tide of illegal migration.

When Barack Obama made the decision to stop enforcing the law (which is, of course, his one job) he created an incentive system that rewards bad behavior and highlights the apparent senselessness of languishing in line for a visa which may never be awarded. That incentive system has led to a border crisis involving the apprehension of over 50,000 fugitives–many of them minors–from Mexico and Central America, Bangladesh, Nepal, and Sri Lanka.

Now, Americans in states like Texas, New York, Maryland, and Tennessee are being asked to devote their time and tax dollars to help clean up the Obama Administration’s mess.

Three times Barack Obama placed his hand upon a Bible and swore an oath to uphold and defend the very same constitution and federal laws that he has been willfully and deliberately violating since taking office in 2009. He has even admitted — in public — that he does not have the constitutional authority to issue the executive order amnesties that he has issued.

And yet the congress and the courts sit back and watch Obama repeatedly violate his oath of office . . . and do nothing.

This is what we call “living in the shadows” in America! Now, the part about “doing the work that Americans won’t do” is obviously not true! We got plenty of Americans that will sit on their ass and protest!

Are these protesters legit or are they someones useful idiots?

My guess would be the latter.

And then, of course, are the useless idiots. Sometimes we let them run whole countries.