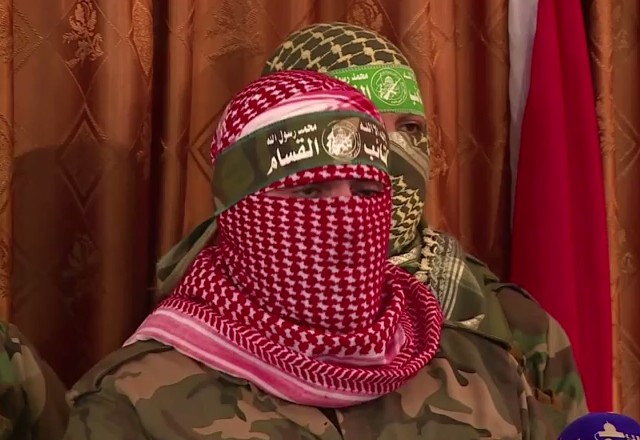 A few articles this week effectively absolve Hamas (and more generally the Palestinians) for the latest escalation in the Middle East and put the bulk of the blame on Israel. I’m only going to focus on two.

Max Fisher wrote How Israel is punishing ordinary Palestinians for three murdered Israeli students for Vox. Fisher’s premise is in the title. Israel is not justified in striking back, so any retaliation is “punishment.” Of course this brought plenty of criticism. David Harsanyi sums up Fisher’s illogical case against Israel.

In Fisher’s view, Israel is pining to kill, longing to occupy, aching to inconvenience. Israel wants to waste millions of dollars tracking down Hamas terrorists; it craves the international backlash that will inevitably follow, and it just never feels quite whole until hundreds of its own citizens, and thousands of Palestinians, are put at risk. There’s nothing quite like persecuting the elderly Arab shopkeeper. Mission accomplished!

The Free Beacon asks why GE is underwriting such anti-Israel propaganda and Twitchy put together the best critical tweets.

But I’d like to concentrate on Fisher’s last two paragraphs. Fisher writes without regard to context. His assumption are incomplete or false. Yes what he writes follows from those premises, but the foundation’s rotten, so his arguments don’t stand up.

Hamas is not so much a victim here, though. There is an important and valid case to be made that Hamas leaders, or at least some members of its armed wing, do bear some responsibility for the teenagers’ deaths. The group has previously encouraged and funded kidnapping Israeli civilians as a tactic. Hamas is labeled a terrorist group by the U.S. and E.U. for good reason, after all. But that does not mean that the group is directly responsible for this kidnapping. More to the point, Hamas joined in a Palestinian unity government in April, which would seem to at least potentially shift its incentives a bit away from militancy and toward cooperation.

In any case, the Hamas political leaders based in Gaza seem unlikely to have participated in a kidnapping in the West Bank committed by rogue Hamas militants, so it’s not clear that air strikes on Hamas political leaders in Gaza are an appropriate or justified response. Whatever you think of Israel’s political leaders, they’re intelligent enough to see the distinctions here. It’s hard to conclude that the air strikes are anything other than either blunt collective punishment or an attempt to damage Hamas’s political position. What the strikes are not doing, though, is deterring future kidnappings of Israeli students or punishing the suspected culprits of this one.

Sure Hamas joined a unity government in April. But Hamas denied that the agreement meant that they had to give up their weapons. A member of Hamas was later quoted saying that Abbas assured Hamas that “we agree on among ourselves.” Fisher’s arguing, without proof, that the unity government demonstrated the moderation of Hamas, when, in fact, all available evidence shows that it meant that Fatah would tolerate terror.

It’s also interesting that Fisher invents the idea of “rogue Hamas militants.” But it’s hard to give much credence to such entities when leaders of Hamas regularly call for kidnapping Israelis and Israel has established that Hamas has an operative in Turkey who’s running operations in the West Bank.

Of course all of Fisher’s unsubstantiated claims are building to his conclusion that Israel’s only goals would be deterring future kidnappings or punishing the specific culprits. Given that Hamas is an organization, disrupting its operations and arresting its personnel certainly would deter kidnappings. Also one of the reasons for the arrests was to get information about the suspects so it’s very clear that Israel’s actions against Hamas are part of the effort to apprehend the kidnappers.

Finally Fisher’s acting as if Hamas only kidnaps Israelis. It actually has a huge arsenal and has threatened to strike Israel with it. Attacking Hamas in Gaza is fully justified on these grounds. So it isn’t Hamas’s “political position” that Israel is attacking, but its military and operational one. Hamas, of course, knows that by hiding its arsenal in populated areas means that there will be people like Fisher objecting when Israel acts in self defense.

As bad as Max Fisher’s argument is, the New York Times has published an op-ed that’s even worse. The Deadly Politics of Revenge by Ali Jarbawi doesn’t just ignore Hamas’s terror and blame Israel for the violence but actually argues that kidnappings of Eyal Yifrach, Gil-ad Shaar and Naftali Fraenkel served Israel’s interests. Like Fisher, Jarbawi uses half truths and evasions to build his argument, but the op-ed reaches bottom in the middle when Jarbawi writes:

The current operation has several goals. It serves to humanize settlers in general, after they had come to be viewed in a negative light globally. The international outcry over the disappearance and death of the three young men, and the sympathy for their anxious and grieving parents, has led to a portrayal of settlers as victims of terror rather than as illegal occupiers. Even if the Palestinian Authority bears no responsibility for the abduction, which Mr. Abbas condemned outright, it has hurt the Palestinian cause, at least in the short run, and elicited sympathy for the settlers.

Jarbawi’s assertion that the three teens were “settlers,” isn’t even true. Only one, Gil-ad, came from territory captured by Israel in 1967. But it’s necessary for him to make the false assertion because of his odious complaint that the abductions would “humanize settlers.” The idea that somehow it’s wrong to feel sympathy for terror victims is beyond the pale.

Jarbawi’s charge that Israelis living in the disputed territories are simply “illegal occupiers” shows the degree to which Israel’s “occupation” has become a distraction. The Palestinians and their apologists continue to complain that the occupation and settlers are preventing peace, when it’s the Palestinian rejection of a Jewish state and support for terror that are the real obstacles to peace.

David Pollock of the Washington Institute for Near East Policy identified the point that Fisher and Jarbawi evade – that the Palestinian unity government emboldened and enabled Hamas.

Part of the agreement was that Hamas would be allowed to operate in the West Bank — the kidnapping is an indirect consequence of that provision. To be sure, there were numerous kidnapping attempts even before the unity deal, but the newfound license for Hamas enshrined in the deal is almost certainly what made this latest plot so tragically “successful.” Of course, the formal agreement did not explicitly condone kidnapping or murder, but Hamas officially interpreted it as an opening for militant activities of all kinds, openly contradicting PA president Mahmoud Abbas’s position. The group’s West Bank sympathizers were newly encouraged to provide local cover, and mid-level PA security officials suddenly became uncertain about where to draw the line in preempting or thwarting Hamas operations.

Until policy makers start assigning responsibility to the Palestinians for the lack of peace with Israel, there will be no peace. As long as the Palestinians feel that they can blame any difficulties in peacemaking to the “occupation” they will not make peace. It’s time to start holding them responsible and making clear that Hamas is not a legitimate partner for peace.

You can’t really blame them. Liberal journalists have a knee jerk reaction to events regarding Israel. Their default position is always Israel is somehow at fault.

Ah, but it gets worser and worser…

Is Max one of those that claim Israel blew up the Towers? Or is he simply mixing crack with angel dust?

Dunno about that, but he is one who believes in all kinds of deep, dark (wwwhhhhhhooooooo) conspiracies. Especially if they say a word critical of Ball-less Bill Clinton, who his daddy worked for.

The Israelis are NOT just reacting to the murders of these kids, but to the world-wide Facebook campaign, the taunting, celebration in the streets of the murders and oh, yes, official statements of threat by Hamas and Palestinian Islamic Jihad.

The Palestinians have been posting pictures on Facebook of very young children holding up three fingers in celebration of these murders. The timing and global nature of this phenomenon belies the excuse that this is about Arab Idol. They have also been making official threats of more kidnappings.

The pictures are showing up in a lot of different places.
http://www.israellycool.com/2014/06/17/more-palestinian-reactions-to-kidnapping-the-most-disturbing-of-all/

They did it at the Temple Mount, and in their cartoons
http://www.thegatewaypundit.com/2014/07/a-new-low➙-palestinian-children-wave-three-finger-salute-celebrating-kidnapping-of-israeli-boys/

They were passing out candles and sweets in the streets. More importantly, Hamas and Palestinian Islamic Jihad both issued official statements calling upon Palestinians to kidnap more Israeli children so as to hold them hostage for ransoms of cash or convicted Palestinian terrorists now in Israeli jails.
http://www.breitbart.com/Big-Peace/2014/06/15/Palestinians-Celebrate-Hamas-Kidnappings-of-Three-Israeli-Children

These “reporters” are only reporting half the news, and trying mightily to imply that Israel is acting in haste on the assumption that its enemies are at fault for these murders when in fact there is a world-wide celebration of the murders. The “reporters” are pretending that the threats by the Israelis were somehow not specifically provoked by official acts by Hamas and Palestinian Islamic Jihad.

There’s little to be added to the Israel/Hamas/PLO/PLA saga. Sadly, it is a conflict that will probably only be resolved as the by-product of a larger external event of some sort. Protestations and objections to the contrary, the entire world knows who and what the Palestinians are and at the very least no one in the world, no one, would chose to have them as a neighbor.

GE is different story. The corporation has been a dog from the day Jeffrey Immelt took the helm. He is single handedly responsible for the ridiculous conduct of MSNBC on-screen folks and mediocrity and pandering of NBC’s news organizations. Both would have stopped in an instant if he had said so. VOX just adds to the list. A corporation without GE’s base and an intelligent board with some backbone would have fixed or sold these media drags long before GE did. Rest assured, even with its now-minority holdings GE still has a larger-than-life voice in management of the brands. I’m not a big fan of independent chairmen, but GE is the classic example of a company that would be much improved if it had one.

An early supporter and favorite of Barack Obama, GE has benefitted greatly from its wind power, LED lighting, other “green” businesses, and massive investments in China. Nah, forget it.