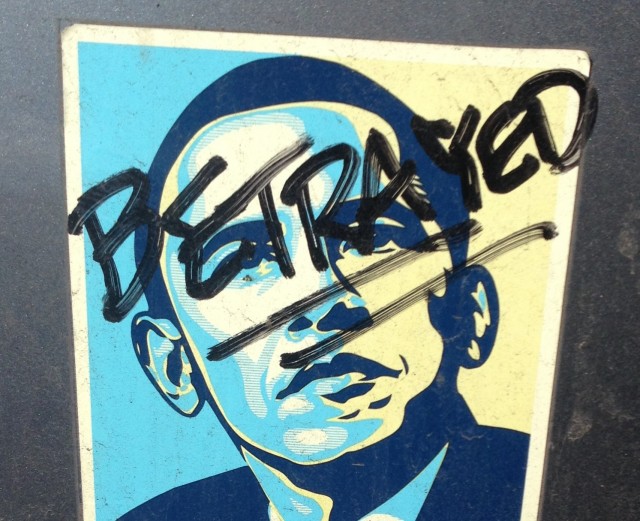 I want to let you know that this photo was shot by me in Oakland, CA last night.

You may publish without my name or email please (for privacy purposes). 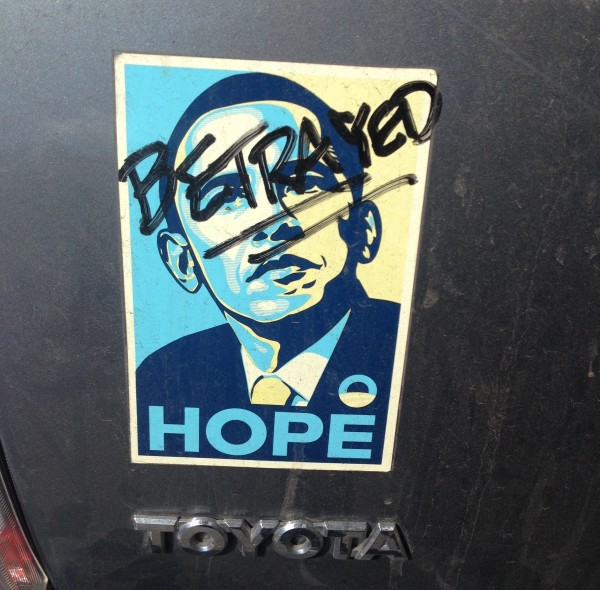 In Oakland though the betrayal may be a belief Obama has not been radical enough. In tracking the actual classroom implementation of the Common Core, the use of deliberative democracy principles kept coming up so I went back and looked into PICO and the other community organizing visions that all started in Oakland.

The belief that racial and ethnic justice will only be met by economic justice is strong there. It is dangerous not to appreciate how much of that is now sluicing into our K-12 system via initiatives like NEA’s CARE Guide or Purple America and Project LOVE.

http://www.urbanstrategies.org/programs/schools/docs/FSCS%20Equity%20Framework%20Concept%20Paper.pdf is an example of what we are dealing with. Comes out of Oakland and California and now being pushed in this 2nd term via the Promise Zones grants and the Excellence and Equity Commission. Neither is on most people’s radar as we adopt every single aspect of what Uncle Karl called his Human Development Model of society.

Recent poll: Over 70% of Obama voters regret their votes.

Uncle Samuel: And sadly these 70% will gleefully vote for the next Democrat nominee, regardless of who that may be.

Strangely, no link to this supposed “poll”.

Like most Democrats, you want someone else to do the work for you. I guess we can call it Information Welfare.

Why betrayed, progressives? He’s doing EXACTLY what he said he would do. OH! I get it..he’s not doing enough to help YOU! He’s a narcissistic socialist who’s hell bent on “transforming America” by turning it into a borderless and ball less country…. and is completing his task. I think you only feel “betrayed” because the transformation isn’t lining your pockets quick enough.

A black woman from a (Brooklyn?) ghetto called in on Laura Ingraham’s radio show. She was lamenting obastard’s letting all the illegals in. She figured out that blacks will be competing with Hispanics for public trough hand-outs. At one point she passionately exclaimed, “Who’s gonna take care of us? Who’s gonna take care of my kids?”

I guess they thought obamullah was going to buy them all new escalades, iPhones, 60″ flat screens, and pay their rent, utilities, internet, and cable TV for the duration and cut them all a check for about $100k each.

“Redistribution of wealth” and all that. Hell, he won’t even allow anyone to get a break on fuel prices by blocking the Keystone Pipeline. He’s got the environazis covering his azz on that, but the truth is that Burlington Northern Santa Fe railroad controls all the track from western BC into middle America. BNSF is owned by Berkshire Hathaway, i.e. Warren Buffett. So now you know why Buffett gives the max to ‘rats and does a whole of of fundraising and bundling for obastard and the ‘rats. Buffett stands to lose about $2B per year if Keystone is opened.

I digress. Obastard never cared about blacks. They’re a dwindling supply of useful idiots. That’s why he wants Latinos imported – to buttress the black voting bloc and provide cheap labor for his corporate donors. Latinos work and they don’t abort their babies. This is a huge boon to business and even to labor unions who will easily recruit them and take their union dues each month, part of which will also go to obastard and the ‘rats.

He’s laughing at the dumb black “community” who wholeheartedly voted for him because of his skin color.

The “thrill” is gone, the thrall is not.

Someone needs to put a vibration meter on Chrissy Matthews leg. That will tell.

Extended translation: “Why didn’t I get any free stuff?!”

I’m meeting people who find excuses for Obama and ways to blame “the rich” and Republicans.

No lesson learned there.

well… 0bama is a closet gay marxist. *lol*
they thought he would usher in the new communist utopia – so far he has failed because the majority are against him/dems.

….to tell you what that looks like look at present day ruined detroit which now is in the ‘Dark Ages’ and a post apocalyptic wasteland after 60 yrs of liberalism

The tears of their betrayal are sweet. Welcome to the obamanightmare folks! You’re late, very late.

But they don’t care about obastard’s destruction of the economy. They just don’t want competition for handouts for Latinos and they’re scratching their heads trying to figure out why they didn’t get some of that redistributed wealth. The wealth that’s been distributed has gone to the ‘rat party and their financial backers.

Anybody who doesn’t understand that the ‘rats rule our economy has had their head buried so long they won’t understand until HHS takes their house away and gives it to a new “minority”.

The correct way to refer to our president is Tyrant Obama the Liar.