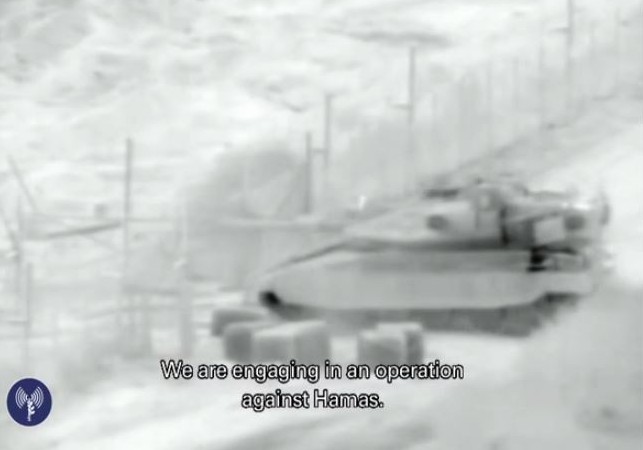 Overnight, the New York Times reports that one Israeli soldier and 20 Palestinians were killed. (A report at The Times of Israel puts the number at 22 Palestinians, at least 14 of whom were members of Hamas.)

An Israeli soldier was killed early Friday along with at least 20 Palestinians in the first hours of Israel’s ground offensive in the Gaza Strip as the violent conflict there entered its 11th day. …

Sirens signaling rockets sounded all night and into the morning across Israel’s south; the army counted more than 50 rockets from the 10 p.m. start of its ground invasion until 7 a.m. Friday.

Israel has made it clear that Hamas’ network of tunnels is its target. Mitch Ginsburg of The Times of Israel explains what Israel hopes to accomplish with the ground invasion.

Unlike the current rocket threat, which has been largely defanged by Iron Dome and early warning systems, the ancient threat of tunnels has no technological solution as yet. “We have no advantage in the underground realm,” said Brig. Gen. (res) Moshe Sheli, the former commander of the IDF’s combat engineering corps. On the ground, in the air, in the sea, he continued, technology offers the Israeli army a distinct edge. Underground, Israel employs a variety of means “but they don’t give us a dramatic advantage, and that’s why this is such a hard challenge to crack,” he said. …

Finding the entrances to these tunnels – often within houses – and charting their alignment and geology, allows the army to neutralize the threat and, at least, set back the timer on these strategic attacks.

This attempted infiltration was another effort by Hamas to rehabilitate its poor operational image and boost its bargaining power during the negotiations on a ceasefire. The relatively large group of terrorists entered through the tunnel that led under the fence close to Sufa, and were apparently intending a major attack with a high death toll and the abduction of soldiers and civilians. Had this plan succeeded, it would have drastically altered the face of this war. …

No responsible political or military leader can afford to have the kibbutzim surrounding Gaza under constant threat from tunnels once Israel and Hamas reach an agreement. So the dilemma of the Netanyahu-Ya’alon-Gantz troika over whether or not launch a ground operation has, with this foiled terror attack, been resolved by Hamas itself.

The IDF has released some videos showing the beginning of the ground attack.

This had better be just a beginning, otherwise it is laughably inadequate and will rightly earn Palestinian contempt. Israel has to actually go into the urban areas and begin a thorough search for arms. It should also make a point of killing as many Hamas as possible. Then, there should be a permanent occupation of all of Gaza.

If the Israelis don’t get serious, they should give up and go back to Europe and America. On second thought, make that America only.

“..will rightly earn Palestinian contempt.” ?!? There is no justification for contempt of any kind for Israel, especially not from the barbarian hordes who use women and children as shields.

Israel IS taking this war seriously and cautiously. A house to house search would be very dangerous, especially with suicide bombers and especially for Palestinian women and children.

Israel knows what they are doing militarily and they need all of our support. The evil forces attacking them should be pushed back into the Mediterranean Sea to drown like rats.

” A house to house search would be very dangerous, especially with suicide bombers and especially for Palestinian women and children. ”

Seems people have forgotten what Israeli soldiers encountered in Jenin.
The houses were boobytrapped and in many, civilians were hostage to the barbarians’ human shield mentality.
Many of the soldiers who died were cought in the boobytraps.

That, and return of the Jewish residents.

So far, 1,497 rockets were fired on Israeli civilians from Gaza. Of those, 1,093 hit Israel, while 301 were intercepted by the Iron Dome missile defense system. Roughly 100 have been estimated to have struck Gaza itself, killing an untold number of Palestinian Arab civilians.

The IDF has eliminated 2,037 terror targets in Gaza.

It’s likely to be a costly operation in terms of lives– both for the IDF and the Palestinians. It will cost the Palestinian civilians far more, and blessed few people will care– certainly not the killers in Hamas and the PA who use their own people for human shields etc.

But then all this was pretty much inevitable. Obama’s Middle East peace initiatives– as well-covered by Gerstman and others on this blog– were hopelessly skewed against Israel and that failure led rather directly to these current events. Attempting to legitimize terrorists and killers does not make them less likely to behave as killers.

A real “no duh” statement that Obama and the American Left seem completely oblivious to.

I am sorry but I wouldn’t care if they lined up bull dozers and starting at the border and pushed everything in Gaza into the sea.

Do people who teach their babies to hate and to love murdering others, people who dance when innocents (including their own children) are killed, deserve a place at the table with us human beings?

When things look quiet beware – they are tunnelling. In this locality technology like bunker busting can’t be widely used . You have to get down & dirty too. It isn’t just any soldier who can even fit down them . . Once you are there you don’t have a lot of equipment & cannot have anyone having anxiety / claustrophobia attacks . It. Is hand to hand fighting on your knees .

Katabatic bomb, and see whose roofs go into orbit.