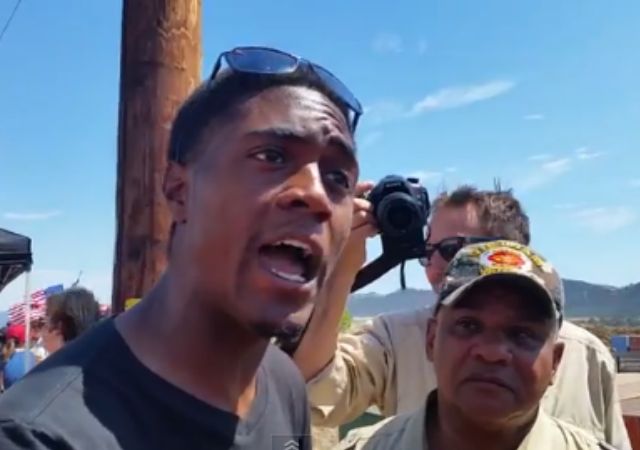 In the following clip where people are talking about the border problems, we see a microcosm of the competing groups, as well as rifts within the black community itself. They may all be Democrats (it’s hard to know for sure), but they demonstrate a diversity of opinion and a great intensity of feeling. The Vietnam vet has a quiet firmness, and the earnest younger man in the black shirt who says “This make no sense!” comes through loud and clear.

It’s true that our government’s reaction to what’s happening on the border makes no sense if we ordinary people look at it conventionally. But it makes plenty of sense to Obama and others in his party who think it will give them a permanent and unbeatable majority in the not-too-distant future, as well as placate the huge Hispanic voting bloc in the present. And if their formerly reliable ethnic group, African Americans, suffers as a result—well then, what are they going to do about it anyway? Turn Republican? After Democrats’ successfully branding Republicans as racist for several decades, that would be a tough pill for many black people to swallow, and the Democrat know it.

Towards the end of the tape, the soft-spoken guy on the right in the red shirt talks the hard leftist line of “Americans have caused all the ills of the world by interfering with it.” Thank you, Howard Zinn! The young woman in the tank top with the thin straps counters him at the very end by saying the US does some good, too.

It’s a little microcosm of America, complete with the drumbeats of the Native American demonstrators who are using the occasion to air their grievances as well:

The National Review has a good article on the topic of the clash between American blacks and the new arrivals. Not only will poorer black citizens bear the brunt of the jobs competition with these illegal immigrants, as well as competing for aid, they will be the ones on the front lines in terms of the invasion of their neighborhoods. No rich white liberal (and no rich black liberal, for that matter) is going to have to live next door to a houseful of illegal alien drug runners controlled by the violent cartels.

The people in the Obama administration seem to think that anything they do is spinnable. And why wouldn’t they? That’s been their experience so far. I wonder about this one, though. People seem very angry, and it cuts across political and racial lines to a certain extent.

The Democratic Party is today, a wholly owned subsidiary of CAIR, ie California Democrats hosting CAIR for a Ramadan dinner party in the California Statehouse in Sacramento, and Comrade DeBlasio’s hosting of a closed door Ramadan dinner party for CAIR over in NYC, no press, no cameras, no cellphones allowed, shades of Comrade Baracks long ago appearance and speech at a Muslim gathering in LA that the LATimes has copies of the video of, but will not release. Please also recall the tsunami of boos, jeers and catcalls that erupted during the Democratic Convention when Tony Villaraigosa announced reinserted support for Jerusalem’s being the Capital of Israel back into the DNC platform. CAIR hired Barack Obama in 2008 to help them lance that vexsome boil, Israel, in the Middle East, essentially that last battle of WWII, that FDR and HST left them and the world saddled with. CAIR will deal with the other undesirable elements of the Democratic Party’s coalition, the Godless Pervs, the freeloaders, moochers, and thugs after Comrade Barack has instituted one man rule over the USA, their votes being necessary for the present. Democracy is so passe’, anyway. Its only useful for installing a dictatorship with the public’s approval. Obama’s adding the finishing details on the how to do it textbook, right now.

“But it makes plenty of sense to Obama and others in his party who think it will give them a permanent and unbeatable majority in the not-too-distant future, as well as placate the huge Hispanic voting bloc in the present.”

In fact, the Mexican et al. voting block is not “huge.” Significant, but not huge. If granted amnesty, then it would be large. But right now, white voters are huge. And that’s what Obama and the dems are trying their very best to change.

Blacks are waking up. Younger blacks in particular are not as inflexible on party as older blacks.

In a couple of states it’s not only huge but dominant, and one of those states has a huge number of electoral votes.

Which is why Obama is quietly shipping these illegal “children” across the country to various states. Without notice to anyone.

As of two years ago, they were already 17 percent of the total U.S. population, significantly larger than the black population, and the numbers are rapidly growing. At this rate, they will become highly influential (or dominant) in other states where their presence is not yet “huge.”

Minimizing this demographic prospect as merely a case of making one blue state bluer is foolish.

Everybody know that when you have historic high Black unemployment .. it’s time to import more low wage workers

Blacks vote Democrat by 85-90% margins. Everybody, including the Democrats, know that they can do anything they want and still retain the Black vote.

Why would Democrats CARE what they think.

The Democrats’ whole political platform is telling some people they’ll get things at the expense of other people.

After Republicans established racial equality in law, the Dems flipped on a dime from open racial hostility to the posture of caretakers and patrons of black Americans, saying, “The Republicans merely gave you the illusion of equality on paper because they really hate you, but we’ll give you things, and you need us to stop them from taking things away from you!”

This Dem strategy has taken on bizarre tones in the controversy over paying for contraception. The Dems, posturing as the patrons of women, are telling well-to-do white women that contraception must be provided to them free of charge out of what’s essentially a communal fund, into which less well-to-do people of all races must pay.

It’s reported that Sandra Fluke is planning to run for Congress in a wealthy district. She will, of course, be telling her female prospective constituents that somebody else must pay for their contraceptives, and many will probably vote for her on that basis.

identity politics.
those who vote according to it always get burned when another identity becomes more in vogue.

The Titans in Mexico, and even more so in Guatemala, Honduras, Venezuela … are the drug cartels and their political “enablers” in office. Mexican prisons are even run by cartels, directly or through shadow connections.
http://latino.foxnews.com/latino/news/2014/05/22/mexican-jail-holding-us-marine-controlled-by-notorious-drug-lords/

Here is my “brief” evidence that Team Obama has long sided with the cartels in conjunction with central American leftist governments. (Black loyalty is assumed, and they get some red meat like “innocent child Trayvon” tossed to them at times, to keep them incited. But south of the border socialist governments are bigger allies)

In 2009 Zelaya illegally extended his term limits and tried to run for an extra term. The Honduran courts and legislature legally stopped him. But Obama/Hillary called that a coup, and they supported drug connected Zelaya. Obama/Hillary sided with Chavez and Castro. Obama/Hillary squeezed Honduras with sanctions, but the Hondurans did not yield to Obama’s push to install his “narco-dictator”.
http://www.examiner.com/article/obama-s-sanctions-cause-suffering-malnutrition-and-unemployment-honduras

Top Cop Holder (aka FastnFurious Gunrunner Holder) has obstructed any effort by the states to check ID or slow the invasion. Former border patrol believe it must be our government keeping major corridors for trafficking open. And current border patrol have rigid restrictions and are kept busy away from the border, especially now as they are on diaper patrol.

Team Obama praises the tactics (including control of media) of Mao or Chavez, as traditional clinger America is always treated as the enemy. Accommodations in law designed to benefit descendants of black American slaves are now “diversified” to all races excepts whites, (and all genders except males).

Talking just blacks versus Hispanics doesn’t seem to get to the root of the problem, though it is useful to point out Obama’s “reparations” hypocrisy, and divide them accordingly. But we need to know how deep the cartels and crime are in our own government, and/or what alliances Rahm and Holder are forming with these cartels and their gangs.

Mexican drug cartels are being allowed by “the powers that be” to operate freely and “run” Chicago’s streets.

Obama’s “God Damn America” church sided with the communists/Sandinistas in the 80’s, and surely have not broken those connections. In their church’s “first principles”, the white man is their Devil. They are more anti-white, than pro-black.

Now the “poor desperate children” are held up as human shields, paraded in front of an army of MS-13 coyotes and gang members. Pelosi says “we are all Americans”. Perhaps the left would prefer a South and North America unified (narco) nation, as a means of destroying our “Euro-centric” western civilization.

Cloward-Piven is one front, to weaken tax-paying America. Drug (and human trafficking) cartels are another. Blacks will continue to be pawns, if they follow the left. Brown is the new black? White Founders are still the Devil.

I love the smell of Schadenfreude in the morning!

It’s a battle royal between competing victims! The grievance industry in full view!